Vermont Postal Unions and Occupy Unite to Save the Mail 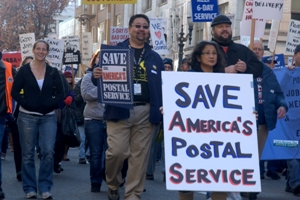 In the face of huge cuts planned for the U.S. Postal Service, dozens of facilities threatened with closure have won a reprieve. That's giving hope to Vermont postal workers and community supporters who are fighting to save the mail and good union jobs. Photo: Jerry Atkin.

The U.S. Postal Service announced in late February that 223 of its 461 processing plants will close. But 35 more won a reprieve, giving hope to Vermont postal workers and community supporters who are fighting to save the mail and good union jobs.

They’re pushing back against the biggest attack on the public sector yet seen. The USPS announced in early December that it planned to close hundreds of rural and inner city post offices and processing centers, including the White River Junction plant in Vermont that employs 245 union workers as well as many trucking contractors. The processing plants are the regional hubs within the national USPS network and the key centers of bulk mail and commercial distribution.

USPS also wants to end Saturday delivery, and its closures could lengthen delivery of first-class mail to three to five days.

Grassroots pressure across the nation won a six-month moratorium on the closures, giving postal workers and community supporters time to organize. It expires May 15.

But the Postal Service’s financial problems are manufactured. Republicans passed a bill in 2006 requiring USPS to set aside more than $5 billion a year to guarantee pension benefits for retirees up to 75 years from now.

This is money that cannot be used for operating expenses, helping open a crater in the Postal Service budget that grew to $8.5 billion last year. Congress, not the internet, caused the postal deficit.

The White River plant is slated to close May 19. Union members and supporters are planning a series of rolling, escalating actions at post offices scheduled for closing, including participating in a national “Occupy the Post Office” called by union activists for April 17, tax day. These will lead up to a statewide rally on May Day.

Organizing in Vermont has been under way for months. Postal unions and allies worked with independent Senator Bernie Sanders to organize a huge town meeting last summer to oppose the plans that, according to Sanders, would put the postal service into a “death spiral.” A September 27 rally saw for the first time all of the postal crafts working together to turn out members.

The spark was now lit. Bill Creamer, president of Mail Handlers Local 301, joined with Patty Dewey of the clerks (APWU) and Jill Charbonneau of the letter carriers (NALC) to approach the Vermont Occupy groups and the Vermont Workers Center for support.

Postal workers and supportive activists began informational picketing. They rallied, leafleted, and used social media as well as public access TV and radio to let the community know the closures were not a done deal. Creamer, like many postal workers a disabled vet, got the local veterans organizations on board.

Many supporters jumped on the issue because they knew the cuts would be devastating for elderly, rural, and low-income Vermonters who depend on the reliability and affordability of the mail, and for whom the post office functions as a social link. It’s often the place where people interact with neighbors, petition for ballot measures, and swap news, the kind of space that’s made small-town Vermont so famously democratic.

A stream of supporters, Occupy activists, postal workers, their families, and retirees stood up to speak about their outrage at a January 4 meeting. The hall filled to capacity as 500 people turned out on a cold winter weekday evening. The entire Vermont congressional delegation and the governor attended.

National union officers say the Postal Service has noted Vermont’s outsized opposition, but worry that postal managers may be determined to close the plant to punish the workers and the community for their outspokenness.

Occupy and the workers continue to picket twice a month, distribute buttons to keep the issue visible, and leafleted and spoke at 50 town meetings in March.

Meanwhile, Vermont postal leaders and supporters are reaching out to union activists, Jobs with Justice, and Occupy groups across the country to ratchet up the hell-raising. At this writing the national postal unions are reportedly only calling on people to contact their congressional representatives.

“The activist pressure is working,” Creamer said. “Things are moving again as the postmaster general, as well as a number of congressional members, are feeling extreme political pressure. Obviously, this is the result of all the grassroots efforts from around the country.”

Liz Blum is an activist with the Vermont Workers Center and Occupy Upper Valley. To follow the campaign, see workerscenter.org/news/save-our-postal-service.

A version of this article appeared in Labor Notes #397, April 2012. Don't miss an issue, subscribe today.
Related
How We Began To Bring the Mail Back »
Viewpoint: Support Veterans by Defending, Not Defunding, Public Sector Jobs at the Post Office and the V.A. »
Florida Letter Carriers Won Back Our Sunday Breaks with Direct Action »
Viewpoint: UNITE HERE International Should Keep Its Hands Off Local 2’s Pension Fund »
St. Louis Boeing Plant Workers to Strike »