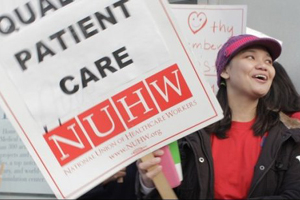 As three unions at the Kaiser Permanente health care chain in California pulled a one-day statewide walkout yesterday, their solidarity went unmatched by the company’s largest union, the Service Employees.

In Modesto, Shawna Stewart, a steward and board member for SEIU’s United Healthcare Workers West (UHW), began receiving calls from members asking whether it was OK to honor the picket lines of 22,000 members of the National Union of Healthcare Workers, the California Nurses Association, and the Operating Engineers.

Stewart sent an email to everyone at her facility, stressing that their contract has a no-strike clause. Stewart argued that SEIU’s 44,000 service and technical workers should not respect the picket lines of other Kaiser unions because “this is not our fight.”

SEIU UHW officials had similarly warned members away from sympathy action last September in response to short strikes then by NUHW and CNA.

Taking aim at NUHW in particular, Stewart claimed that its members “put themselves at risk” of contract concessions when they decertified SEIU and joined the new union. “Now they have to fight for everything they ALREADY had,” Stewart finger-wagged. Their switch was triggered when the SEIU International trusteed their local and removed the leadership in 2009.

"If they want our support, they would need to sign a card saying they want to come back and then they can keep what they had,” Stewart said, adding “it’s always best to stick with the winning team.”

For thousands of other Kaiser workers, forging rank-and-file unity and striking together on January 31 seemed like a better way to build a “winning team” when Kaiser wants givebacks on pensions, health care, and more. The three sponsoring unions claimed high levels of rank-and-file participation at scores of hospitals and clinics around the Golden State.

NUHW struck, as it has several times before, to back up ongoing negotiations involving 4,000 mental health professionals, optical workers, and Southern California nurses who switched from SEIU to NUHW in 2010.

CNA’s 17,000 RNs at Kaiser in northern California joined the work stoppage, even though their contract doesn’t expire until 2014. Kaiser dragged the nurses into arbitration last fall, saying CNA violated the “no-strike” clause in its contract after the union called on members to strike in sympathy. Union leaders pointed to legal precedents that back up members’ rights to honor other workers’ picket lines.

A new addition to the fray was 650 members of Stationary Engineers Local 39, who maintain the hospitals’ air conditioning, refrigeration, and physical plant. They, like CNA, struck in sympathy with NUHW and helped picket other building trades workers off the job at Kaiser construction sites.

By some estimates, hundreds of health care workers who belong to SEIU also stayed home or showed up to picket. They ignored warnings and resisted pressure from their own union, which remains wedded to Kaiser’s “Labor-Management Partnership” program. (For more on that program, see here and here.)

At a boisterous picket line outside Kaiser’s Oakland Medical Center, strikers sang, danced, and distributed flyers to patients and their families that stressed safe-staffing issues as well as the concession threats. In a statement issued by CNA, nurse leader Zenei Cortez, a 29-year Kaiser veteran, said that while they reward themselves, Kaiser executives want to eliminate secure retirement and retiree health care, make other health care takeaways, and “refuse to bargain for sufficient staffing for mental health services.”

Several Kaiser professionals, including psychiatric technician Juan Ibarra and social worker Amy Thigpen, echoed the criticisms made in "Care Delayed, Care Denied", a whistle-blowing report issued by NUHW last November based on information provided by unionized social workers and psychologists, plus outside experts.

NUHW is lobbying state and federal officials to “initiate immediate investigations to determine the full extent of Kaiser’s regulatory violations.”

Thigpen’s union, SEIU, has refrained from any such public criticism of Kaiser and discouraged social workers from joining yesterday's strike. Nevertheless, about half of Thigpen’s co-workers respected the picket lines on Howe Street in Oakland.

Not About Purple and Red

Wearing their crimson NUHW T-shirts, Larry Parker, Sonia Minor, and their Kaiser co-workers were out early yesterday morning, picketing at an optical center in Richmond. Parker has spent 28 years with the chain. “If Kaiser gets takeaways from us,” he said, “they’re just going to do the same thing with everybody else.”

“It’s not about the purple and the red,” agreed Minor, referring to the signature colors of SEIU and NUHW. “At the end of the day, we all work for Kaiser and we all need to stand together to protect our benefits.”

Minor has sat at the bargaining table for NUHW and heard Kaiser negotiators demand that defined-benefit pensions be eliminated—while CEO George Halvorson is receiving nearly $9 million a year and gets multiple retirement plan coverage. The hospital chain has made $5.7 billion in the last three years.

But a very different picture of Kaiser’s financial health and future was presented 10 days ago at a pre-bargaining meeting of SEIU and other labor-management partnership union delegates in San Jose.

According to a Kaiser worker in attendance, Dave Regan, who was installed as UHW’s new leader three years ago, suggested that Kaiser might end up like bankrupt General Motors “if we’re not careful.”

A recording of the meeting reveals Regan saying there is a “train bearing down on us” that might lead Kaiser to “take our stuff,” as he called the union’s contract benefits.

To fend off such low-road behavior, Regan argued that “we can push [Kaiser] to a higher place.” The destination he described is an expanded employee “wellness” program—of the sort SEIU has already helped other California hospital chains introduce.

These programs essentially blame the personal habits of workers for medical cost inflation—and penalize those who fail to shape up. As Regan explained in San Jose: “If you’re overweight, you pay for more of your health care. If you smoke, you pay 20 percent more. If you do this or that, you pay more. That’s what’s going on out there.”

Can’t Say No To Kaiser?

Regan proposed tying future contract bonus money “to how we use health care to get healthy.” This would, he claimed, “protect what we have,” while changing Americans’ perception of unions.

By email, the Kaiser worker who taped the meeting accused UHW leaders of trying to soften up delegates. “They never talk about the fact that Kaiser is rolling in profits, that the CEO got a $1 million raise, and that other unions are fighting Kaiser’s cuts. Instead, they try to scare us that we’re going to turn into the UAW and Kaiser will turn into General Motors unless we let Kaiser cut our benefits. They tell us: ‘You’re lucky to have a job.’

“Regan told us that we can’t show up at the bargaining table and say ‘no’ to the cuts,” said the worker, who insisted on anonymity. “Instead, he says we have to ‘get out in front of the cuts’ by offering our own.”

The continuing struggle over which path to take at Kaiser—resistance to concessions or the non-adversarial approach embraced by SEIU—will intensify in the months to come.

In October 2010, NUHW lost its representation challenge to SEIU in Kaiser’s giant service and technical unit. But the vote among those 43,000 employees was overturned last summer after the NLRB found that SEIU’s illegal campaigning, along with Kaiser’s unfair labor practices, “interfered with the exercise of a free and reasoned choice among employees.”

If the workers adversely affected by this collusion get another vote between the two unions in the middle of SEIU’s 2012 bargaining, Kaiser and SEIU may have a harder time peddling concessions as a lasting prescription for labor peace.

Steve Early’s new book on the inter- and intra-union conflict at Kaiser Permanente and other California health care employers just went into its second printing. Copies can be ordered from Haymarket Books at www.civilwarsinlabor.org. Early can be reached at Lsupport [at] aol [dot] com.

SEIU is way past an embarrassment to the movement for social change and what a Labor Union is supposed to act like. Are they the only ones who fail to notice that trying to buy street cred--and even co-opt Occupy campaigns is a bit tricky while they're crushing dissent internally and collaboratating openly with bosses from coast to coast? Kaiser workers won those gold standard wages, benefits, and contract standards the old fashioned way: they fought for them. It took years of struggle to build those contracts in the former Locals 250 and 399, which then merged by an actual vote of the membership into the powerhouse that was the pre-trusteeship UHW. "Partnership," when practiced back then, had heavy conditions on the employer which directly benefitted workers and patients

Their leaders and thousands of members now comprise NUHW, after being purged from SEIU for "disloyalty" to the ruling elite in the almighty IU, and their descent into a world where they call the shots and cut deals with the boss without any accountablity to the rank and file who pay their escalating comp packages.

Now, "Partnership" is defined by the pathetic, overpaid, and transparent venditos in Diamond Dave Regan's feeble crew being obliged to give their highly profitable masters back what took a real Union decades to win. This deal was cut in dollars and cents back when Kaiser agreed to help save SEIU from their own members' desire to have a real Union again with NUHW. These "partners" collaborated with Union busting tactics so despicable that even the NLRB--not widely reknowned for its protection of workers' rights--was compelled to throw out this largest US labor election in 70 years--and call for a new one without illegal conduct straight from the Gulag.

Paying more for health insurance or not getting a raise until a worker who may have just given birth loses enough weight is a concept so bent that even Orwell wouldn't have written it down. But according to the hapless but wealthy Regan: "If you do this or that, you pay more. That’s what’s going on out there.” Out where? Perhaps WHERE THEY DON'T HAVE UNIONS WORTH A DAMN.

The uber rich already own enough politicians to get their way, and owning what once was a hell of a Union is yet another undeserved bonus. But NUHW keeps beating the stacked deck, and health care workers in Canada and Michigan have now joined California rank & filers in "just saying no" to the tender mercies of SEIU--where it is said that discerning where their nose ends and the bosses' ass begins has become a barren source of amusement.

Kaiser's Trickle-It-Down-and Maybe-It-Will-Cause-Something-Important-to-Happen Management approach has a lot to be desired. Kaiser will continue to punish employees, as well as work to have the nasty employees hound the good ones, so long as it suits their business model. And who will always suffer in the end? The patients.

THIS IS WHAT KAISER GETS FOR SUPPORTING OBAMA/ROMNEY-CARE!!!!