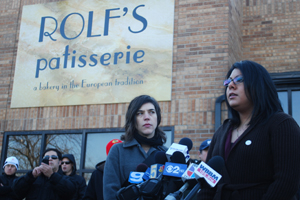 Losing your job is hard on any worker. But imagine discovering from the company website that your job is gone.

It happened in December to 136 employees of an upscale bakery in the Chicago suburb of Lincolnwood. Unfortunately, worker center advocates say, such sudden closures with mass firings are not uncommon. Two Chicago worker centers are fighting for laid-off workers left in their wake.

Karen Leyva was the assistant office manager at Rolf's Patisserie. She said workers were told on a Saturday the bakery would be closed for cleaning on Sunday and to report to work on Monday.

Workers weren’t officially informed of their termination until weeks later, in early January, after they’d started a campaign with the ARISE Chicago worker center and filed a lawsuit.

Their lawyer, Thomas Geoghegan, said the owner failed to follow the WARN Act, which requires 60 days’ notice of a closing or the equivalent in severance pay.

Final paychecks bounced, and some workers were hit with hundreds of dollars of “insufficient funds” penalties for their own bounced checks.

The former Rolf’s employees, with the support of the worker center, have pressured owner Lloyd Culbertson for weeks.

The workers organized a delegation to the Lincolnwood village hall, where Village Manager Timothy Wiberg agreed to contact Culbertson and ask him to settle the workers claims against the company. State representatives and senators have done the same.

And last Wednesday, a group of workers visited Fourth Presbyterian Church in downtown Chicago were Culbertson attends services and spoke with the pastor.

The efforts have already had results. Most workers have received last paychecks and accrued vacation time. The company has agreed to pay the workers’ bank and currency exchange fees that resulted from the bounced checks.

Under the state’s wage-theft law, Illinois mandates workers receive final paychecks and accrued vacation by the next scheduled payday, with failure to pay opening employers to damage claims and felony charges for repeat criminal violations.

Workers voted to drop charges over the wage theft, but only after all workers have received their final paychecks. The WARN Act violation remains unresolved. ARISE Chicago vowed to keep the heat on until Culbertson pays workers their 60 days of mandated severance.

The bakery workers were already tightly networked before the closure, with several families working alongside each other. Thanks to one worker’s connection to ARISE, they were able to quickly mount a rally and press conference outside the closed bakery.

“At first we started kind of shaky and scared, and we still are,” Leyva said. “Sometimes putting your face and your name out there in the public, it is a little scary for everyday people like us.”

Nearly the entire workforce attended meetings held at ARISE over a mid-January weekend to plan and vote on a strategy.

“Usually we see just the bakers, or just the kitchen staff, come to us with a problem like this,” said ARISE’s Director Adam Kader. “Rarely do you see all the workers united.”

Like the United Electrical Workers-represented workers at Chicago’s Republic Windows and Doors who fought a sudden closure in 2008, the bakery employees argue that the bank that controls the company’s remaining assets is calling the shots. They blame First American Bank for stopping payment on their checks.

What mystifies the workers is that the company showed no signs of financial distress. Indeed, Leyva was intimately familiar with cash flow and is at a loss to understand the overnight decision to close the doors. Lawyers for Culbertson have admitted that neither he nor the business plans to file for bankruptcy.

A group of wronged workers in a different Chicago suburb are taking action for another sudden closure.
The entire 150-person workforce at a warehouse for the home goods company Winston Brands was fired in early January in what workers allege is retaliation for forming a union.

In doing so, the company may also have violated the WARN Act, said Martin Unzueta of Chicago Community and Workers’ Rights, another worker center.

Margarita Flores and Estrella Hernandez, who had worked for years as temps, said managers at the Melrose Park warehouse encouraged workers to start before actually punching in for their shifts. Promises to create full-time “direct hire” positions rarely materialized. Sexual harassment was rampant as well, the women said.

“Some of the supervisors would get up so close to you at your work station you weren't sure if they were checking your work or checking out your butt,” Hernandez said.

The worker center and the Electrical Workers have collaborated in several other Chicago-area warehouses to confront the corporate giants that pull the levers.

When six of the Winston Brands workers were fired without explanation several months ago, the workers first petitioned the employer to rehire them. When that failed, they formed an independent union with the worker center’s help and asked the company to recognize it.

Instead, the warehouse closed. It’s hard to tell if the closure is temporary or permanent, however. Hours had been cut back previously in slow seasons, leaving workers unsure whether it’s shuttered just until business picks up.

Since their mass firing, the workers have maintained a picket line in front of the plant.

Even in clear-cut cases of wage theft, it could be months if not years before workers see a resolution.

“Enforcement is notoriously lax,” Kader said, “given the agencies tasked with enforcing labor law are underfunded and under pressure in a political climate that has them facing constant attack.”

“If I went to the store across the street and stole a bottle of Coke, you can be sure that the owner would call the police and the police would be questioning me,” Kader said. “When the owner of a company steals the wages of dozens of workers, how come the police are not at his house right now asking him some questions?”

Jerry Mead-Lucero is host and producer of the Labor Express radio show, online at laborexpress.org. Follow the Rolf’s campaign at dignityatwork.wordpress.com.

Related
As Omicron Rages, Teachers and Students Fight for Safety Measures in Chicago and Elsewhere »
Chicago Passes Union-Backed Bill for Civilian Oversight of Violent Cops »
Work Is the Reason Latinos Are Getting Slammed So Hard by the Pandemic »
Pandemic Spurs Nashville Restaurant Workers to Organize »
Chicago Unions Demand to Defund Police and Fund Health Care for All »