A Shallow Victory on Living Wages in New York City 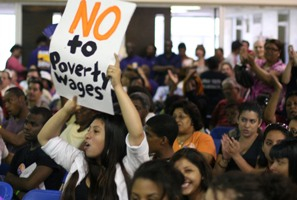 After New York’s retail union announced a living wage deal, activists greeted the news with mixed feelings. Only a small number of workers will be affected, but hope sprang from a sense that the conversation about low wages has changed. Photo: KARA.

New York’s retail union announced a living wage deal with the powerful speaker of the city council in January, following a two-year fight to increase wages for retail workers in city-funded commercial developments.

Activists in the Living Wage NYC coalition greeted the news with a mixture of hope and dismay. The dismay reflected the small number of workers affected and the loss of a key demand: that the tenants in developments subsidized by the city—from small boutiques to big-box chains—would pay a higher wage.

The hope sprang from a sense that the conversation about low wages has changed, leading to serious discussions in Albany about raising the state’s minimum wage from $7.25 to $8.50. Even Michael Bloomberg, New York’s billionaire mayor, now favors an increase.

The living wage campaign can claim some credit for changing the politicians’ tune, said Ava Farkas, a staffer with the Retail Wholesale and Department Store Union (RWDSU).

“There’s been such an outcry against economic inequality and poverty wages—including Occupy Wall Street,” she said. “We helped created an environment where conservative business leaders realize they now have to move on minimum wage.”

The New York City deal would cover new developments that have profits of more than $5 million a year and receive at least $1 million in city subsidies overall. Owners would pay their workers at least $10 per hour—$11.50 without health benefits—indexed to inflation, for 10 years following the subsidy.

The new law would cover direct and indirect employees of the company receiving the subsidy, including mail room clerks and cafeteria workers, but it would not cover workers in stores renting from that property owner.

Therefore most retail workers in subsidized commercial buildings will not be covered, including those at Walmart if it succeeds in entering the New York City market by becoming a tenant in a new mall. Similar challenges have dogged other living-wage efforts.

Estimates of the number of workers affected vary, but are small given the generous subsidies the city has dispensed to private companies. Union researchers said that if the law had been in effect from 2002 to 2010 it would have covered 7,400 workers—just a fraction of the 486,000 retail workers in the city.

Crain’s quoted City Council Speaker Christine Quinn saying the new law would cover fewer than 600 people a year. Given that 1.6 million New Yorkers live below the poverty line, even boosters in the union and on the city council agree that the law would be largely symbolic, using phrases like “a step in the right direction” and “a way to change the dialog.”

The fastest-growing jobs in New York City are in low-wage sectors, according to a 2011 report by the Drum Major Institute. More than half the jobs gained in 2010 were in hospitality and retail, which pay less than half the average city wage.

RWDSU, a division of the Food and Commercial Workers and a lead backer of the living wage bill, took advantage of Quinn’s mayoral ambitions, cutting the deal right before Martin Luther King Day festivities. Living Wage NYC had implied it would publicly call Quinn out on King Day for stalling the living wage proposal for over a year.

City Hall protests, lobbying, and rallies on Martin Luther King Day that drew thousands of people to a historic Harlem church punctuated the campaign. Ministers from dozens of Black and Latino congregations anchored the coalition, infusing the economic demand with a moral urgency and signing up three-fifths of the city council to support a stronger measure.

Quinn has agreed to introduce the bill in February. It is expected to pass the city council but may face a veto by the mayor, which the council could override. RWDSU’s public statements implied that in return, Quinn will enjoy its support in the 2013 mayor’s race.

The union is looking past the current fight. While Quinn had been motionless on the living wage until now, she’s been outspoken against Walmart, even keynoting rallies against the mega-chain.

Living wage activists celebrated in 2009 when the council denied a powerful developer $60 million to build a mall in a disused armory in the Bronx because the company refused to agree that mall tenants had to pay a living wage.

The council’s rejection caused bitter rifts in New York’s labor movement. The developer had made side agreements with building trades unions and the Service Employees (building services workers), while RWDSU continued to battle for the workers who would staff the retail outlets. When the project died, RWDSU was accused of killing jobs.

Similar splits wracked Chicago unions in recent years as fights developed over Walmart’s moves into the city and an ordinance that would have lifted wages in big-box stores.

In New York, the bruising fight led RWDSU and the living wage coalition to draft language that would require both developers and their tenants to pay the $10 wage. But the deal with Quinn scuttles that notion.

Instead, $10 million has been promised as a pilot program to entice retailers to pay higher wages. Details are still to be worked out, but the bill contemplates that developers would be subsidized to give their tenants a break on rent if the tenants agree to pay higher wages, in effect transferring public money to low-wage workers at no cost to employers.

Activists (and the city council) had rejected such a deal in 2009, asking why taxpayers should subsidize a company’s otherwise low wages.

But in 2009, the city pledged to favor a developer who would agree to wall-to-wall living wages in the former armory. No such developer appeared.

The city is now requesting new proposals for developing the Bronx site. The living wage coalition may have to fight the same battle again.