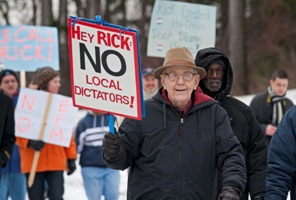 Michigan’s top union leaders are meeting behind closed doors to decide whether to attempt to amend the state constitution to block emergency managers and a "right to work" law through a ballot initiative this November. Photo: Jim West.

Governor Mitch Daniels received a bouquet of roses after he signed Indiana’s right-to-work law in February—not from U.S. Steel or Subaru or other grateful Indiana employers, but from an ambitious Republican in next-door Michigan.

State Representative Michael Shirkey said he wanted to thank Daniels for setting the bar high, while promoting his own drive for right to work.

Though no credible research backs him, Shirkey claims Indiana now has the edge in attracting investment, so he wants to “eliminate [the union shop] as an obstacle and level the playing field.” Michigan’s workforce is 16.5 percent unionized.

Although Republican Michigan Governor Rick Snyder says he’s not interested in pushing right to work, unionists note Daniels said the same thing before reversing course this year. As in Indiana, Republicans control both houses of the Michigan legislature.

Michigan’s top union leaders are meeting behind closed doors to decide whether to take on the huge fight it would require to amend the state constitution to block right to work, with a ballot initiative this November.

Al Garrett, head of statewide AFSCME Council 25, said the amendment would prohibit the legislature from crafting new laws that infringe on collective bargaining rights in the private or public sectors. Language is under discussion.

United Auto Workers (UAW) President Bob King surprised Detroit community activists February 2 when he revealed the plan at a small forum. Some audience members had been active in gathering signatures to put a different issue, the state’s emergency manager law, on the November ballot.

Passed last year over heated objections from unions, that law allows Snyder to appoint overseers for cities or school districts operating in the red. They have the power to cancel union contracts, sell off local assets, and remove elected local officials.

In Wisconsin, unions were instrumental in gathering more than a million signatures to recall the anti-union governor. In Ohio, they did the same to repeal an anti-collective bargaining law.

When an audience member asked why Michigan unions have not wholeheartedly backed the petition to repeal the emergency manager law, King said leaders thought amending the constitution was a better, more permanent strategy. A constitutional amendment would block both right to work and emergency managers, he said. The measure does not have to pass the legislature.

Community organizations, churches, and some union locals struggled to collect signatures to put repeal of the manager law on the fall ballot, finally announcing February 13 that they had reached the threshold.

Under Michigan law, once 162,000 signatures are certified, the law is suspended until voters have their say. Opponents had wanted to get the law on hold last fall, before more cities could fall under the ax. Detroit is currently under state officials’ review.

Ray Holman, legislative liaison for a UAW local representing 17,000 state employees, said, “Some of us have been collecting as individual citizens, not because the union told us to.”

Opponents decry the emergency managers as an infringement on democratic rights and note that all the jurisdictions now operating under them are majority African American. The manager in Detroit’s school district, a former GM executive, is closing and charterizing schools left and right.

New Hampshire Republicans are again pushing a right-to-work bill after Governor John Lynch vetoed one in December. Hundreds of union members rallied at the statehouse in February against the measure, which would be the first in the Northeast, a union stronghold. Ohio unions are preparing for a right-to-work referendum on the fall ballot as well.

In Minnesota, a few GOP legislators have said they will introduce a bill to put right to work on the ballot in November. Republicans control both legislative houses and under the state constitution, the Democratic governor cannot veto such a bill.

Some unions have been phonebanking legislators to reject the bill, which has not yet been endorsed by Republican leaders. Already on the Minnesota ballot is a constitutional amendment to define marriage as between a man and a woman and, quite probably, a requirement for voter ID, which unions view as an attack on the voting rights of people of color and young people, who are less likely to have ID. Minnesota activists may combine their resources around the three issues.

King pointed out that even if the original manager law is suspended, the legislature could quickly pass another, similar one—which legislators have, in fact, threatened to do.

Community leaders at the forum, including Maureen Taylor of Michigan Welfare Rights, sharply questioned King as to how they were supposed to work together to defeat a common enemy if unions made decisions without involving or informing community allies.

Union decision-makers have not reached agreement themselves, however. King said an amendment campaign would cost $15-$20 million, leading some leaders to balk at the cost.

It would require 322,609 signatures to put an amendment on the ballot.

John Philo, whose Sugar Law Center in Detroit helped file suit against the emergency manager law, said state Democrats may be leery of a constitutional amendment campaign, fearing it would “bring in a lot of money from the other side.”

Wisconsin Governor Scott Walker has raised $12.2 million, most of it from right-wing sources out of state, to defend against his recall.

Meanwhile, Michigan city officials are getting some of what an emergency manager would seek simply by using the threat. In February Detroit unions reached tentative deals to open their contracts again and take concessions, such as ending defined-benefit pensions for new hires. Talk has swirled of selling off city assets, including the Frederick Law Olmstead-designed Belle Isle, an island park in the Detroit River.

Holman points out that some Republicans in the legislature are already attempting to achieve right to work through other means. A House committee recently reported out a bill that would force unions to ask members to reauthorize dues every year. Last year a bill to institute right to work for teachers was promoted but died.

Shirkey, the Republican legislator, says Snyder doesn’t want a repeat of the protests in Wisconsin. But if right to work passes the House, Holman said, “that could create momentum that would change Governor Snyder’s calculations.”