Living Wage Laws: Worth the Effort? 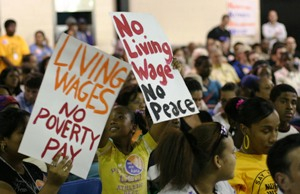 Activists have won more than 125 living wage ordinances in cities and counties, and state and federal minimum wage increases. Yet the number of workers earning poverty wages remains as high as ever. Are the laws worth the effort? Photo: KARA.

Almost 20 years ago a “living wage” campaign by pastors and union organizers in Baltimore caught the attention of activists around the country. It looked like a way to address the fact that so many people were working but were still poor.

Living wage activists have accomplished a lot since then, winning more than 125 living wage ordinances in cities and counties, three city minimum wages, and state and federal minimum wage increases. Eight states have indexed their minimum wage to inflation because of activist pressure, and campaigns to raise and index state minimums are underway in 10 more states.

Activists also created coalitions that have helped unions organize and win better contracts. They’ve supported city and state campaigns for paid sick days and influenced the debate about who should benefit from economic development.

Yet the number of workers earning poverty wages remains as high as ever. A quarter of all workers in 2009—about 35 million people—earned less than the hourly wage needed to bring a full-time worker to the federal poverty line for a family of four.

The problem has many roots. Living wage ordinances cover a relatively small number of workers, because a typical ordinance applies only to firms that receive contracts or economic development assistance from a city government.

And even the “living wages” the movement has won are not enough to bring a worker out of poverty, especially since many low-wage workers are involuntarily part-time.

To meet the federal poverty line for a four-person family, a worker would need to earn $10.63 an hour and work 40 hours a week, 52 weeks a year. But this official poverty line—$22,113 a year for a family of four—grossly underestimates the real cost of living.

The living wages won in the last 20 years vary from $9.50 to $17.78 (if health benefits are not provided) and include no guarantee of hours.

Despite the weaknesses, the wages won have been significant for those affected, who’ve seen raises during a time when wages were mostly stagnant. But more important than dollars gained have been the new coalitions and strengthened alliances built in many cities, building a foundation for future social movements.

After all that, some ordinances in small cities may cover only a few dozen workers. (Larger ones can cover tens of thousands.)

But living wage activists never saw the ordinances themselves as the solution to poverty. Most saw the campaigns as a way to assist unionization efforts and contract campaigns, or to grow community and faith-based organizations.

For example, activists have been able to mandate that cities give priority to developers who don’t violate labor laws. Language on “access” gives unions the ability to visit the workplace. Non-retaliation can protect workers who talk about living wages or rights on the job, and get them their jobs back if they’re fired for organizing.

The laws sometimes forestall contracting out, since private companies lose interest in city contracts where they can’t cut wages.

After activists won a living wage in Tucson, Arizona, city workers contacted the Communications Workers and organized their own union for more than 1,500 workers. The San Francisco living wage coalition helped win card check from the airport commission, resulting in several thousand workers joining a handful of unions. The National Education Association has launched a national effort to use living wage campaigns as contract campaigns, to raise wages for school support staff.

Community organizations have also grown. ACORN was the movement’s most visible success, growing significantly for 20 years in membership and influence. While ACORN had internal weaknesses, it became the nation’s largest community organization for poor people and people of color, with over a half million members—and a target for the right wing even before the infamous smear video that proved its unmaking.

In addition, community-labor “think and do tanks” benefited from the living wage movement. They are now part of a national network, driving campaigns such as “clean and safe ports” in Los Angeles, universal health care in Connecticut, and connecting affordable housing and transit access in Denver.

For the most part, the living wage movement did not turn out to be an easy path to new organizing, and as a result by the 2000s some unions had backed off heavy involvement.

In some cities, unions have even argued against living wage campaigns because they might be a deterrent to new organizing: If workers got a raise through legislation, they might not see the need for a union. Some in the building trades have been reluctant to put the labor movement’s stamp of approval on the ordinances’ low pay.

Sometimes unions attempted to pass ordinances from the top down through relations with politicians, rather than doing the hard work of movement- and relationship-building. Some campaigns did not involve any of the workers that would be covered by the ordinance, although many did.

But on balance, unions have played a positive role in the living wage movement, providing material and political support. In a few cities it was a way to build a Jobs with Justice chapter.

Despite the challenges in using the campaigns for new organizing, many union or labor council leaders got involved because they saw it as the right thing to do, or to help build more of a social movement close to home.

Living wage activists were aware all along that the ordinances they championed did not truly create a living wage. But they had to work within the context they faced—a weak labor movement and dormant social movements—and attempt to build their forces for bigger struggles down the road.

They knew that raising the federal minimum wage, now $7.25, would affect many more workers than passing ordinances city by city, but with Republicans relentlessly attacking workers and Democrats pointing to education as the solution to poverty, opportunities to win those increases were rare.

Living wage actions did help convince Congress to pass increases in 1996 and 2007, but the boosts were not enough and soon lost value from inflation.

Many living wage campaigns were launched not because they were the best policy available but because they could use leverage where activists were most likely to have it: at the local level.

What was the alternative to living wage campaigns? It is not clear that labor and community groups had better opportunities to build alliances and power. In this context, the campaigns made sense.

While activists in some cities are trying to expand the coverage of living wage ordinances, a New York City campaign demonstrates the challenges.

Despite solid research that showed the potential benefits of a living wage, Mayor Michael Bloomberg and the Chamber of Commerce went full force against the plan. Bloomberg compared it to a Soviet decree, and the city gave $1 million to a living wage opponent to write a report denouncing the idea.

Campaigns to mandate living wages for hotels and retailers in other cities have seen similar attacks, with opponents spending lavishly.

Even city governments with strong economies and Democratic control do not seem willing to stand up to the threats of major employers like Walmart. In Chicago in 2006, Mayor Richard Daley used his first veto in 17 years to defeat a proposal applying to large retailers. Daley even suggested that living wages were a union attempt to deny jobs to African Americans.

After almost 20 years of organizing, living wage activists remain committed. In the coming year, they will launch more state minimum wage campaigns, build toward a larger federal increase, and work to expand indexing.

But defeating the corporations that have built their entire business model on low wages remains a giant challenge.

Stephanie Luce has studied and worked with living wage campaigns for more than 15 years. She teaches labor studies at the Murphy Institute, City University of New York.

Why not by-pass the wage-system as such and advocate for a basic income? This, too, might be seen as a challenge to unions, but only insofar as they (the leadership) depend on having some kind of leverage in the wage system. However, it would give workers a better position from which to accept work or not (I refuse to further endorse the notion of bargaining as a metaphor for economic justice) on their own terms. In a sense, it could grow out of the living-wage movement insofar as what we're talking about is something of a "social wage".