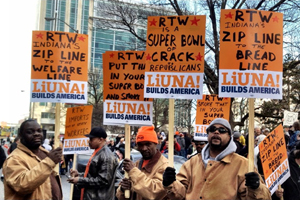 As Indiana becomes the nation’s 23rd right-to-work state, unionists and Occupiers are considering what actions to take as the nation’s attention focuses on the NFL championship Sunday in Indianapolis. Some say the attack on workers merits a dramatic response. Photo: Stand Up for Hoosiers.

In protest, thousands of right-to-work opponents poured out of the statehouse in Indianapolis and took to the streets, chanting “Occupy the Super Bowl” as they marched.

Unionists and Occupiers are considering what actions to take as the nation’s attention focuses on the NFL championship in Indianapolis, with some saying the attack on workers merits a dramatic response.

The anti-union bill had passed the House last week 54-44, after Democrats’ amendment to put the bill to a referendum of the state’s voters was voted down. A referendum amendment introduced in the Senate was also rejected.

A poll conducted by the Indiana AFL-CIO showed 71 percent of Hoosiers were in favor of putting right to work to a statewide vote.

While the Indiana AFL-CIO has signaled its support of “activities at the Super Bowl to show the world how Hoosier workers are under attack,” it has declined to take a central role in organizing such demonstrations as the game approaches.

The state federation will distribute fliers during events throughout the weekend, but, as Communications Coordinator Jeff Harris told ThinkProgress, the intent is to be informative, not disruptive.

Indiana AFL-CIO President Nancy Guyott said Thursday, “The appropriate outlet will be at the ballot box, not the Super Bowl.”

The hotel union UNITE HERE, which has been trying to organize workers at a downtown Hyatt for three years, will host a rally Friday. The hotel chain has told 20 subcontracted workers, some of whom have worked there for almost a decade, that they will be fired three days after the Super Bowl.

Two NFL players will speak at the rally, reflecting their union’s stance against the right-to-work law. The AFL-CIO offered parking and shuttle service to the rally.

Many anti-right-to-work activists, however, are looking to step up the resistance.

Occupy groups from across the state are planning a range of actions this weekend around the statehouse and the Super Bowl stadium. Occupy Indianapolis is encouraging protesters to come with tents to occupy a park and has announced plans to take the streets around the stadium and shut down traffic on game day.

Teamsters have also threatened to block streets in downtown Indianapolis with their trucks. Local 135 members showed up at the statehouse this week wearing “Occupy the Super Bowl” T-shirts.

Bill Mullen of Occupy Purdue says protests will continue despite the bill’s passage because of the “horrible domino effect” he fears the legislation will have.

Republicans in Minnesota are pushing for a ballot initiative on right to work in November, while a group called Ohioans for Workplace Freedom received approval yesterday from the state attorney general to push for a similar measure. Republican legislators in Michigan are calling on Governor Rick Snyder to consider right to work as well, though he has said pursuing such a bill would grind the statehouse to a halt.

Governor Daniels made similar arguments last year, saying the fight over right to work wasn’t worth it. That helped quash right to work in Indiana in 2011—until he came out as a strong proponent this year.

Right to Work for Less

While right to work supporters are celebrating the union-busting legislation as a job-creation measure that will make Indiana more attractive to businesses, opponents say there’s no evidence to support this claim.

A study from the Economic Policy Institute showed that the passage of a right-to-work law in Oklahoma in 2001 did nothing to boost jobs in the state. What the corporate-backed legislation has done, according to the study, is lower average income by roughly $1,500 per year in states where such laws are implemented.

Right-to-work laws allow workers to opt out of paying union fees while still maintaining the full benefits of union membership. In testimony given at an Indiana Senate hearing on Monday, Operating Engineers Local 150 Political Director Todd Vandermyde said that right-to-work legislation may run afoul of a clause in the Indiana state constitution stating that no one can be forced to provide services without “just compensation.”

Brent Eastom, president of IUE-CWA Local 901, says that he’s confident members of his local understand the need to maintain membership to show strength in numbers at the bargaining table. Nonetheless, he says, “you can’t put it past certain people to think, ‘Why should I pay for the cow if I can get the milk for free?’”

Will History Repeat Itself?

This is not the first time Indiana has had a right-to-work law on its books. In 1957, a similar measure was passed by a Republican legislature over the protests of thousands of unionists.

Popular opposition to the new law quickly manifested itself in the 1958 elections, when a number of Republicans were ousted. In 1965 a Democratic majority in the legislature overturned the law.

Labor’s top leaders hope to pursue a similar electoral strategy to repeal the law this time. AFL-CIO President Richard Trumka told the Indiana state federation Tuesday that Republicans who pushed the bill through “will pay the price at the polls.” Chants of “Remember! November!” have echoed through the statehouse halls.

Nonetheless, some feel that a push to oust right-to-work supporters at the ballot box may be too little, too late.

According to the Laborers’ David Williams, “the likelihood of us recapturing the House, the Senate, and the governor’s seat within the next two cycles is very slim,” noting that Democrats haven’t had control of the Senate in Indiana since the 1970s.

Correction: The article originally stated the Democrats have not had control of Indiana's House since the 1970s.