Defend Your Breaks, and Defeat Retaliation 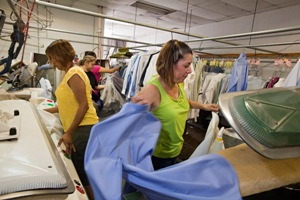 The economy is sour and job vacancies aren’t being filled. Employees with seniority are being hounded into early retirement, with the result a de facto speed-up—new demands, heavier workload, extra responsibilities.

One day a younger worker comes to you, looking exhausted and pissed-off. He’s had to absorb the workload of two other staff who’ve left and not been replaced.

He complains that he hasn’t taken a coffee break or normal lunch for months. He shows you an “open letter” he’s written naming the top executive as a greedy SOB and demanding that the work rules in the contract be honored. He wants to leaflet the whole workplace.

As a steward, you’re happy to see someone willing to take action, rather than just complain. But on the other hand, you know that although this guy has the right to distribute a leaflet to his co-workers, his rights won’t amount to much once he paints a target on his back.

What to do, then? How do you resist relentless speed-up, including fighting to keep contractual breaks, and encourage the young worker in a way that builds support behind him and protects him when the inevitable retaliation comes?

Ask some questions that will help “embed” the problem he is having in a picture of the overall workplace.

Help him see that his problems are shared by lots of co-workers—and help him identify allies. Perhaps he should take his open letter around and ask for co-signers. Set a goal, a minimum number of signatures he should get, before he considers releasing it.

Make sure the number is high enough and broad enough—representing different work sites, job titles, and seniority levels—so that a clear message is sent to the employer that this is not an isolated gripe. And encourage him to include clear, concrete remedies. For example: restoration of regular breaks; a guarantee that lunch periods will be work-free; no new unilaterally assigned duties.

As the letter is being circulated for signatures, talk about what collective steps people can take to back it up with action. How about printing up small cards with the contract clause that guarantees break time, and handing the card to any supervisor who attempts to guilt-trip someone into skipping her break?

Could a big group all go on break at exactly the same time on one day, no matter what the work demands were? Would they be willing to walk through a worksite ringing a bell to announce break time? Theater and humor always help.

At this stage it’s necessary to “inoculate” folks about the retaliation that is sure to follow bold actions.

In one-on-one conversations, and eventually in leaflets and posters that can be distributed openly, explain ahead of time that retaliation is expected.

Spell out what it may look like—some individuals may be singled out for “performance review” or written up for trumped-up infractions. Others could be penalized with new assignments or given bad schedule changes, or find themselves the object of malicious gossip (spread by boss loyalists). Someone could even be suspended or fired.

Name it openly to defuse the shame and fear that follows these sorts of attacks.

Describe the steps people should take if they become a target: First, the retaliation should be exposed by talking and writing about it. Second, the facts should be mustered to build the case that this is retaliation for workplace activism.

Third, supporters should be ready to protect the victimized colleague with their own actions, such as petitions and pins (You can’t scare us!) and, of course, through filing grievances and unfair labor practice charges.

Smart stewards analyze the power relations within the workplace, and identify and isolate any bosses who may be vulnerable. If a strong case can be made against a particular boss for his own bad behavior, upper-level executives may be willing to sacrifice that person to regain workplace peace.

Our labor history abounds with stories of workers taking action on behalf of a brave colleague. These stories leave us with a legacy of purpose and self-respect that we can try to live up to.

Ellen David Friedman was an organizer for the Vermont National Education Association.

In some cases, management is changing the policy on breaks - making people take them at their workstations or splitting up break times so you can't take breaks with co-workers. If break times and rules are not written into the contract, these changes can be challenged with a demand to bargain because this is a unilateral change in conditions of employment. A campaign around defending breaks can then be built using many of the ideas that Ellen puts forward. The legal strategy of a demand to bargain can help protect workers from retaliation and can give the union additional rights in the bargaining process.

As Ellen points out, protecting breaks is especially important in these times of Lean, speed-up and job combination. Protecting our ability to take breaks, and take them together, is critical to protecting the daily worker-to-worker interaction that helps create the solidarity that we so desperately need today.