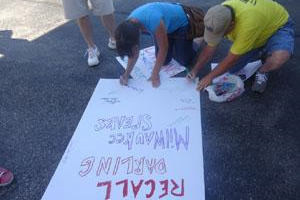 Wisconsin unionists toured the state in a Truth Tour bus and succeeded in recalling two of the six Republican senators they'd sought to unseat. Here they prepare to walk neighborhoods near Milwaukee. Photo: Wisconsin AFL-CIO.

From the first day of the Wisconsin uprising last winter, chants of “Recall! Recall!” repeatedly sprang spontaneously from the crowds.

After petitioners collected tens of thousands of signatures for recall last spring, yesterday, finally, the voters had their say. By defeating only two of the six Republican state senators up for recall, Democrats fell one vote shy of a majority in the Senate. Two Democrats facing recall next Tuesday are expected to win their elections.

The two victorious Democrats are solid progressives. Jennifer Schilling, in the La Crosse area, has been in the Assembly for the past 10 years, compiling a 98 percent voting record on the state AFL-CIO’s roll call. Jessica King, deputy mayor of Oshkosh, is an attorney with a compelling personal history. The four Republicans who won reelection had all served in the legislature at least 16 years and were able to ride that incumbency to victory in solidly Republican districts.

The only candidate who is a current union member—teacher Shelly Moore—was handily defeated.

Governor Scott Walker and company, sensing losses ahead, began downplaying the importance of these elections several days out, but that did not stop various front groups funded by the likes of the Koch Brothers and the De Vos family (Amway) from pouring millions of dollars into the elections.

All told, there were nine recall elections—six Republicans and three Democrats (one of the Democrats won his election easily on July 12). According to the Milwaukee Journal Sentinel, almost twice as much money was spent on these nine races ($35-$40 million) as was spent on all 116 Wisconsin legislative races in November 2010.

In the wealthy suburbs north and west of Milwaukee, $8 million was spent on behalf of just one incumbent, Alberta Darling, who was Walker’s point person on the powerful Joint Finance Committee. In what may well have been the most expensive state legislative race in the country’s history, the incumbent got 54 percent of the vote.

Meanwhile, moderate Republican Senator Dale Schultz, who was not up for recall, has gone from marginalized to majordomo overnight. Schultz, who is known for working across the aisle and who has no love for Scott Walker, was the lone Republican vote in the Senate against Walker’s union-busting bill. What this means for organized labor is that Right to Work is probably off the table for the rest of this legislative session.

On the Republican side, nearly all the outside money was spent on radio and TV ads, which degenerated into tried and true racist smears about “welfare fraud” and “illegal aliens” as election day drew near.

By and large, however, the Republican candidates themselves stayed on message. That message was that they had closed the budget deficit without raising taxes. They accused Democrats of addressing the previous budget deficit by increasing taxes. The Republicans neglected to mention that those tax increases came mainly in the form of closing a major corporate loophole and increasing the income tax for the very wealthy by 1 percent.

Meanwhile, the Democratic challengers said Walker and his allies had closed the budget deficit via draconian cuts in state aid to education and local government while giving tax breaks to corporations.

For the average voter, however, the message around budget cuts was largely theoretical. Local governments are currently preparing their budgets for next year, so cuts in local services have not yet been felt.

Because of mandated property tax freezes, some places, particularly smaller school districts, will face devastating cuts, despite the public employee concessions required by Walker’s union-busting legislation. Even large jurisdictions like the city of Madison will be hit hard. The city negotiated concessions from its union workforce but is still staring at an $11 million shortfall.

But all of that pain is in the future.

Given the fact that these elections were held during the dog days of August and that only one race was on each ballot, it was assumed that voter turnout would be the key.

Organized labor, its traditional allies, and many others whose interests had been gouged by Walker’s reverse-Robin Hood budget worked together under the “We Are Wisconsin” umbrella to produce a ground game unlike any previously seen.

Going into get-out-the-vote weekend, four days ago, hundreds of volunteers had already knocked on 275,000 doors and made nearly three times that many phone calls. The We Are Wisconsin effort, which also included media buys, was estimated at nearly $10 million, mostly from unions.

Dozens of We Are Wisconsin staff and loaned union staff worked with hundreds of volunteers in each district. In addition, union volunteers from outside the recall districts aided the effort with phonebanks, data entry, packet stuffing, and carpooling into the districts for door-to-door canvassing.

For weeks prior to election day, the halls of the Madison Labor Temple, which is about an hour away from the nearest recall district, were packed with volunteer phoners, canvassers, and packet preparers. All told, over 5,000 volunteer hours were logged at the Temple prior to GOTV weekend and another 1,650 hours during the GOTV effort.

In the end, voter turnout was huge, matching gubernatorial votes in most areas and approaching presidential votes in several. And when turnout is huge in Republican districts, Republicans usually win.

The four Republican winners are in very Republican districts; indeed, all six Republicans being challenged had won election in 2008 when Obama carried Wisconsin handily.

Some argue now that failure to win at least three of these races puts a damper on efforts to recall Walker. But Walker, when he is recalled, will be running statewide. He’ll not only have to win these six districts by significant margins, he’ll have to make inroads in Democratic strongholds where he is passionately loathed.

Last spring's statewide race for Supreme Court, where an unknown came within 7,000 votes of defeating a longtime incumbent ally of Walker, is probably a better yardstick of Walker’s chances than were these elections.

Wisconsinites face a daunting task in trying to reverse the damage that the Walker administration has already wrought. Yesterday was a first small step. Winning the two recall elections next Tuesday is another small step.

Recalling Walker would be a big step, and changing the state Assembly in November 2012 would be another big, possibly final, step.

These steps will only be accomplished, however, if the massive civic involvement of last winter’s street demonstrations, this past spring’s recall petitioning, and this summer’s voter education and GOTV efforts are sustained. That’s a tall order.

Jim Cavanaugh is president of the South Central Federation of Labor, headquartered in Madison.