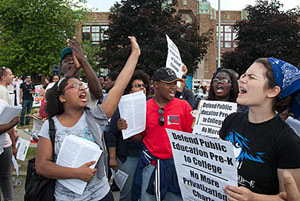 Detroit school employees, already among the lowest paid in the area, will see their salaries cut even further beginning this month. Students protested in June one of the many school closings and privatizations that have left the district with just 70,000 students. Photo: Jim West | jimwestphoto.com.

The Detroit school district’s emergency manager, Roy Roberts, is using the near-dictatorial powers granted to him by the March bill to impose a 10 percent wage cut on all 10,000 employees and make them pay more for their health care.

Roberts thoughtfully included his own $250,000 salary in those to be cut.

The law was proposed by newly elected Governor Rick Snyder this winter in order to give appointed financial managers the authority to impose budget cuts in cities, towns, and school districts operating in the red. Snyder’s appointees have the power to cancel any contracts and remove any elected local officials.

The law has been challenged in court by 28 Michigan residents, many of them community activists, who say granting sole law-making power to an individual violates the state constitution.

Roberts, a retired GM executive appointed in May, says the Detroit school cuts will save $82 million, out of a deficit of $327 million. He is the state’s first emergency manager to decree changes to a school district. In June, the city of Pontiac voided its police dispatchers’ union contract.

Ruby Newbold, president of the Detroit schools’ office employees union, told the Detroit Free Press, “Roberts is doing what he was sent here to do.”

The wage cuts come on top of cuts the district has already made in its 2011-2012 budget, closing 14 schools, or converting them to charter schools, and eliminating nearly 800 employees. Three years ago the district ran 200 schools; next year the number will be 127. Nearly half of Detroit schoolchildren will attend charter schools this fall.

Teachers, office workers, paraprofessionals, bus attendants, and other union workers had already made contract concessions or taken furloughs in their most recent contracts. Since January 2010 each teacher has “loaned” the district $250 each biweekly pay period, to be repaid when they quit or retire. The new cuts will not be repaid.

Newbold noted that her union took a long list of cuts in the most recent contract and has seen no pay increase since 2002. "Taking this 10 percent will take us back to 1989 wages," she told Labor Notes.

According to Newbold, if Roberts applies the cut to lunch aides, they will drop below minimum wage.

Workers will now pay 20 percent of their health costs, up from 10 percent. “Whether you look at pay, retirement, insurance, the district’s costs are already at or near the bottom,” said Detroit Federation of Teachers VP Mark O’Keefe. “Of the 83 districts in the tri-county area, we are 82 or 83 in just about everything. Teachers’ salary and benefits aren't the cause of the financial problems the district is having.”

O’Keefe said the district is paying $100 million a year to service old debt caused by mismanagement and to make up unfunded costs of educating special ed students. Because charter schools tend not to accept special students, Detroit has more than 10,000—about one in seven of the student population—each of whom puts the district $8,000 in the red, according to O’Keefe.

Teachers will no longer receive pay for unused sick leave nor compensation for preparation periods they were unable to take. Nor will they be paid more if their class sizes are over the limit.

Roberts says the district will decrease class sizes—but, O’Keefe said, student numbers will merely go back to the contractual level that the district unilaterally and illegally raised last year. That means classes of 35 students in grades 6 to 12.

Nina Chacker, who teaches deaf students, said the new contract was “worse than anybody thought it would be.” She noted that rumors of losing the sick-day pay led to massive retirements in the middle of last term, creating chaos for teachers and students.

“This is not a concession,” O’Keefe insists. “We didn’t concede anything. It’s taking money out against our vociferous objections, with us giving them specific ideas on how they can avoid this.”

If state aid came with fewer strings attached, O’Keefe said, the district could shift money where it is needed, such as to special ed students.

“How is that collective bargaining, if you say ‘let’s work out a deal, let’s compromise,’ and then you can go back and change all the parts you don't like?” he said.

The Detroit Federation of Teachers promised to file suit.

A version of this article appeared in Labor Notes #389, August 2011. Don't miss an issue, subscribe today.
Related
Minneapolis Strikers Demand a Living Wage for the Lowest-Paid Educators »
Richmond Educators Are First In Virginia to Win Bargaining Rights »
Twin Cities Teachers and School Employees Gear Up for Strike »
As Omicron Rages, Teachers and Students Fight for Safety Measures in Chicago and Elsewhere »
Troublemakers Schooled in Detroit and Philly »