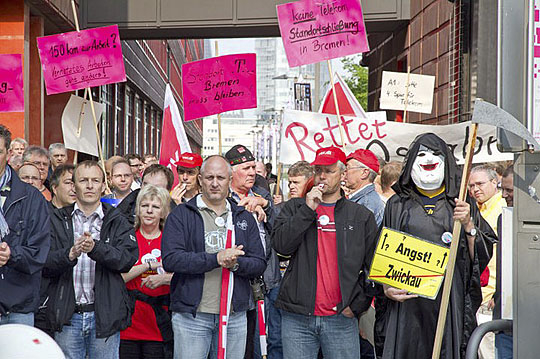 T-Mobile workers trying to organize face threats and videotaping—legal under current labor law. The telecom union on the German-owned company’s home soil has protested on their behalf. Photo: Manfred Geneschen

Union organizers are welcoming rule changes proposed by the Labor Department and the National Labor Relations Board.

The NLRB changes would shorten the election time period and help ensure employer appeals don’t stall votes. The Labor Department changes would make anti-union law firms or consultants hired by employers reveal how much they are paid.

But after spending 40 years in the labor movement, I know these changes will not substantially improve the chances of workers trying to organize through the NLRB process.

At my first NLRB hearing as an organizer, the company was represented by an anti-union law firm. During the pre-hearing conference, the lawyer said he would agree to an election date one year in the future. I insisted on the usual 45 days.

He stood up, with a dramatic flourish unrolled a long piece of paper, and said, “I have 50 reasons why there should not be an election here ever, and we will litigate them all the way to the Supreme Court.”

I appealed to the NLRB agent, who shrugged. I agreed to an election date six months later, rather than engage in years of hearings. We won one of the two units.

This is the kind of corporate tactics we are up against. And that was when times were “good.”

Making employers reveal how much they are paying consultants will provide fodder for the union. It shows workers how they would benefit if the employer spent money on them instead of on busting their union.

It’s helped before. In August 1936, just a year after the National Labor Relations Act was passed, the U.S. Senate held hearings on employers’ use of spies, thugs, and provocateurs.

Senator Robert La Follette subpoenaed records from outfits like the Pinkertons and exposed how much employers were spending on strikebreakers and guns. He released reports from management spies hired to work in factories.

The La Follette Commission never produced legislation to end these practices because Southern Democrats and Republicans could block it. But the sunlight on employer tactics helped unions gain much sympathy, and shamed many companies into breaking ties with anti-union gunslingers.

The modern union-busters are more subtle but no less destructive. Exposing a consultant’s payday will not stop his threats of plant closings, nor the one-on-one meetings and captive-audience indoctrination seminars that kill many union campaigns while skating on the edge of legality.

Quicker elections, meanwhile, may catch some employers (mainly smaller ones) off guard, but in most cases employers will just change their union-fighting timetable. With challenges now heard after the election, there could still be years of delay before the votes are counted, while employers challenge who was eligible to vote or alleged violations by the union.

Neither of these changes increases unions’ ability to win a first contract, a process that employers now drag out for months, if not years.

The labor movement is being thrown a bone by an administration that understands labor law in this country is hopelessly tilted in favor of management rights—but won’t do anything to fundamentally change that dynamic. Notice that the failed Employee Free Choice Act did not challenge the basic set-up, which legally gives more rights to employers than workers.

It’s like that Fred Wright cartoon: workers enter the factory gates under a sign that reads “Abandon All Rights You Who Enter Here.”

Here are the fundamental problems:

The legal concept in play is that corporations are “persons” and therefore the government cannot curtail their free speech. Thus they have the right to interfere with workers who are deciding whether to join a union.

Workers’ free speech rights, on the other hand, can be curtailed by the employer because the First Amendment only says the government cannot hold back free speech. With authentic free speech, workers could organize for a union at all times, not just “in non-work areas during non-working times,” as the rule stands now.

The NLRA, passed in 1937, called it an unfair labor practice for an employer to interfere with employees organizing a union. The Supreme Court approved, for example, a letter for the American Tube Bending Co. to send to its employees. It simply stated that management hoped the workers would vote no. Pretty mild stuff.

But when the Taft-Hartley Act passed in 1947, it granted employers “free speech.” As long as there were no threats or promises, employers could say whatever they wanted.

Before Taft-Hartley, it was illegal for employers to make workers attend anti-union meetings. Today, those meetings are a staple of the anti-union program.

The rule of masters and servants is a basic concept of English common law, upon which much of law in the United States is based. Essentially it says that servants must do what their master tells them to, because he is paying them.

This concept still exists in how the NLRB and courts define the relationship of workers and bosses.

If the boss says so, “servants” must watch anti-union videos, sit through anti-union meetings, obey now and grieve later, and be segregated from the rest of the workforce so they can’t talk union.

An effective labor law would have to ditch this legal concept.

When employers challenged the NLRA, the Supreme Court shocked many by upholding the law. But its decision was based on the constitutional clause that gave the government the right to regulate interstate commerce—i.e., business.

If labor law were based instead on the free speech, right to assembly, and anti-slavery amendments to the Constitution, totally different, pro-worker interpretations would follow.

Many aspects of Taft-Hartley, which handcuffs unions by forbidding secondary boycotts and sympathy strikes and preventing low-level supervisors from joining unions, should fall by the wayside.

To combat the anti-worker bias that underlies our legal system, we need to develop a long-term strategy that combines mobilizing with legal challenges, just as did the civil rights movement, the suffrage movement, and the movement to end slavery.

These concepts need to be challenged at the NLRB, at arbitration hearings, and in our contract negotiations.

Take discipline, for instance. If a worker steals, an arbitrator would uphold his firing. He broke the company’s rules, and probably the contract, too.

An arbitrator, however, never punishes management for stealing, except to make the employee “whole.”

Workers who commit an offense move up the progressive discipline ladder. Why not demand that a foreman who continually violates the contract by doing bargaining unit work be disciplined “up to and including termination for repeated offenses”?

We can also file NLRB charges attacking the employer’s “right” to free speech in union elections, based on the original legal interpretation that any employer interference violates the law.

We will lose many hearings, but our concepts need to be publicized and repeated again and again—workers’ rights are human rights—to gain acceptance. Legislative change will follow.

Dave Cohen was a representative for the United Electrical Workers union in Massachusetts.

A version of this article appeared in Labor Notes #389, August 2011. Don't miss an issue, subscribe today.
Related
How Starbucks Workers Won in Mesa »
If the PRO Act Were Law, The Amazon Union Election Would Have Looked Very Different »
Viewpoint: Who Invited Them? Employers Like Amazon Should Have No Say in How Workers Organize »
Goodbye and Good Riddance: Biden Fires Labor Board’s Peter Robb »
Trump’s Anti-Worker Labor Board »