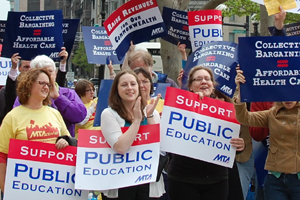 Politicians of both parties have been tough on public employees in this recession, balancing state and city budgets through layoffs, wage freezes, furloughs, and benefit cuts. But rarely have labor-backed Democrats targeted the very right of public employees to collectively bargain.

It’s a tightrope for the pols. Democrats get most of their campaign funding—72 percent nationally—from business, AFL-CIO President Rich Trumka said this month. He added that the union share of the Democrats’ war chest has fallen to half what it was a decade ago.

But union money is still substantial. AFSCME claimed top place in all political spending in 2010, pouring $87.5 million into campaigns.

And union get-out-the-vote efforts can make or break some races. Union-household voters increased both Obama’s percentage and that for House Democrats by 2.4 points in 2008.

Legislators need to keep unions in the fold. How much can they go against core union desires and still win their backing?

Precedent says—a lot. Year after year, union leaders look at the greater-evil Republican alternative and urge members to work for the Democrat, no matter how sorry the candidate.

In New Jersey, the Communications Workers, representing 45,000 state and local government employees, dogged Democratic Governor Jon Corzine’s heels for months in 2009, protesting his plan to cut their wages through furloughs. But CWA endorsed Corzine when he was up against layoff-happy Republican Chris Christie.


Democratic legislators, eager to save money, are betting they can cut into public employee bargaining rights. These New Jersey public workers are not happy about it. Photo: CWA Local 1037.

As Republicans like Christie and Wisconsin’s Scott Walker tilt further to the Tea Party right, the desire to keep them out of office at all costs becomes even stronger. After all, Walker’s ilk wants to do away with public sector unions—and their donations to Democrats—altogether. Democratic politicians are banking on that dime’s worth of difference.

In Massachusetts, a Democratic stronghold, lawmakers are pressing to strip 175,000 municipal employees of health care bargaining rights. House members passed a measure April 26 that would prevent teachers, police officers, and others from bargaining over deductibles and co-pays.

Two-thirds of House Democrats supported the measure, ignoring protests and a radio ad campaign coordinated by the state AFL-CIO. The Democrats’ action has led to “tremendous outrage and feeling of betrayal” in the labor movement, observes Dan Clawson, a board member of the Massachusetts Teachers Association (MTA). “It’s definitely a break from the past.”

The Democrats’ bill, which purports to save $100 million in health insurance costs, comes in the context of a nearly $2 billion state deficit. The deficit impacts local governments, which rely on state revenue sharing.

Budget-strapped municipalities are eager to shift health care costs to employees, as state government did last year. Municipal employers are supporting the anti-bargaining bill so that they can impose such changes unilaterally.

Most legislators dismiss other options to address the state’s deficit, such as raising taxes or reforming health care to control costs. Labor and community groups, on the other hand, propose to raise $1.2 billion through increased capital gains taxes and income taxes for high earners. Hundreds of labor and community activists converged on the Statehouse May 3 for a day of hearings and lobbying.

But the battle is uphill. Only a handful of legislators back the tax increase, and they’re the brave ones, says Andrei Joseph, a Concord history teacher and MTA board member.

In next-door Connecticut, the governor and top Democrats in the legislature sponsored language to take bargaining rights away from college faculty by reclassifying them as managers.

Health care bargaining is the battleground in New Jersey as well. The Communications Workers opened contract negotiations in March with a health care proposal that conceded higher costs for members.

But Christie refused to bargain, and instead proposed employees pay 35 percent of premiums, up from the current 8.5 percent average.

Christie’s proposal was followed by a slightly better one from Democratic Senate President Stephen Sweeney, who is also an organizer for the Iron Workers.

Both proposals strip unions of the right to bargain health care, however.

“We’re shocked that Steve Sweeney, who calls himself a Democrat, would act in this manner,” said a state Firefighters official.

In response, CWA and other public employee unions are asking legislators to pledge to oppose the removal of union bargaining rights. Some have signed on, reports Kavanaugh, while six legislators who refused have already been targeted with picket lines in front of their offices. Members are demanding that health care be bargained, not legislated, he said.

Illinois’s bargaining rights war has focused on teachers, Chicago teachers in particular. Democratic legislators have joined hands with billionaire-backed lobby groups in an effort to deprive teachers of bargaining rights, job security, and the ability to strike.

A first attempt in January, led by Democratic House Speaker Mike Madigan, fizzled in the face of opposition from the Chicago Teachers Union (CTU) and both statewide teacher unions. The corporate lobbies followed up with a clever spring offensive, however. They engaged the teacher unions in negotiations at the state Capitol, with Democratic State Senator Karen Lightford shepherding the process.

The teacher unions were prepared to make concessions—for example, to accept takeaways on seniority rights—in order to avoid greater losses (including the loss of collective bargaining).

But Lightford and the lobbyists inserted last-minute changes in the bill that union negotiators failed to catch. Chicago teachers would be prevented from filing unfair labor practice charges if an employer refused to bargain over many subjects. The bill also sets up roadblocks that make it virtually impossible for Chicago teachers to strike.

CTU’s president joined the two statewide teacher federations in endorsing the bill, which sailed through the Democratic-controlled Senate.

Two weeks later CTU reversed its stance, but the bill passed the Democratic-controlled House with only one dissenter. The teachers are now fighting for a “trailer” bill to amend the measure’s worst aspects.

The willingness of state Democrats to turn on labor, coupled with the Obama administration’s lackluster support for union issues, is causing Trumka to make tentative noises about political independence.

Trumka said the federation will spend much more of its political-action money this year and next on educating and mobilizing members “year-round,” instead of handing it over to Democrats and their campaign structures in election season. The activity would still aid Democratic candidates, presumably.

Trumka went further, vowing to “actually make people pay a price” if they don’t keep promises, hinting that unions could challenge unsupportive Democrats in primaries, as they did (unsuccessfully) against ex-Senator Blanche Lincoln in Arkansas last year.

Trumka added that unions will “start running some of our own, in state races.”

Even that degree of independence would require a major shift in union thinking. In Wisconsin, anger at the Republican onslaught enabled unions and supporters to gather signatures to force recall elections of six Republican state senators this summer.

Despite the upsurge of support for unions, only one of the Democrats recruited to run, a teacher, comes out of the labor movement.

Jane Slaughter contributed to this article.

Democrats has been always clash over the Republican party.And though they may seem rival in some isues int eh congress like Medicare and the budget still they cant avoid the internal conflicts in their respectice parties.And this rivalry gets trigger because of a chair which was previously held by the GOP in New York's 26th Congressional District was won by Democrat Kathy Hochul in Tuesday's special political election. Hochul's challenger was Republican Jane Corwin. Hochul barely won, 47 percent to 43 percent. A third candidate, Democrat-turned Tea Party campaigner Jack Davis, garnered 9 percent of the votes. I read this here: Democrat gets seat from GOP, nestype.com.