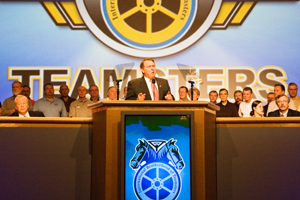 After six months of investigation and three months of appeals, court-appointed election overseers have ordered Teamster President James Hoffa to acknowledge that he attempted to buy election support by offering jobs and pensions.

Hoffa must pay for a mailing to all Teamster locals publicizing the attempt, and place a notice on the union’s website and magazine.

“The unofficial slap on the wrist is now official,” said Barbara Harvey, a lawyer for Teamsters for a Democratic Union (TDU). The judge’s decision was finalized April 1.

The court-assigned election supervisor, Richard Mark, found in January that Hoffa himself and three members of his election team had offered jobs or pensions to two international officers and a high-level official whom they wanted to deter from running on a competing slate.

The election for Teamsters president this fall is a three-way race, with Hoffa seeking a third full term in office. He is challenged by Sandy Pope, president of a Queens, New York, local, a reformer running on a platform of building power through rank-and-file participation.

Rifts among Hoffa’s supporters have resulted in a challenge from Vice President Fred Gegare of Green Bay, Wisconsin, and other formerly Hoffa-aligned officials.

One of those officials, Fred Zuckerman, the union’s carhaul division director, said he was offered a raise and pension plan enrollment. “They expected me to support the Hoffa slate and not run against him,” Zuckerman told the election supervisor.

International Trustees Frank Gallegos and Henry Perry were being booted off the Hoffa slate in favor of candidates Hoffa thought could do better at voter turn-out. Both were asked to resign their elected trustee positions but still support the Hoffa slate. In return they would get appointed jobs at the same pay.

Gallegos testified that he didn’t take the job offer because he didn’t trust Hoffa to follow through. Zuckerman and Perry are now running for vice president positions on Gegare’s slate.

The bribery attempts were made by Hoffa and Vice Presidents Rome Aloise, Ken Hall, and Tyson Johnson.

Though he documented the bribery attempts, the election supervisor initially took no action against the Hoffa campaign. He said the campaign “approached, but did not cross, a major boundary line.”

He explained that since the bribes were refused, “there is no basis to find a violation of the ban on use of union resources.”

Pope called Conboy’s decision “a positive step toward restoring integrity to the Teamster election. The abuse of power at the top of our union has to be rooted out,” she said.

Teamster elections have been under court supervision since the settlement of a racketeering lawsuit in 1989. The settlement also established direct member election of top officers, a measure TDU had pushed.

Pope and Hoffa have each collected signatures from 2.5 percent of the membership, required for campaign space in the Teamster magazine and access to member mailing lists.

Candidates have to win 5 percent of the delegate vote at a late June convention in Las Vegas in order to be on the ballot, so the fight is on to win delegate elections. The Pope campaign is counting on a combination of rank-and-file reform slates and local union officers for the delegates she needs.

In Minnesota, Pope and Gegare supporters united in an “Anyone But Hoffa” slate swept the delegate races in an 11,500-member public employee local.

The testimonies collected by the election supervisor offer a window on officials more concerned with preserving their own jobs than with the working conditions, pension crises, and layoffs facing Teamster members around the country.

Mark wrote, “The conduct revealed in this investigation reflects a culture, or mind-set where elected union officials do not clearly distinguish between their fiduciary responsibilities to the union and their separate political objectives of achieving election.”

His office is mailing a letter to all Teamster locals—at Hoffa campaign expense—describing the bribery attempts and ordering all candidates on the Hoffa slate to “cease and desist from using union resources to conduct campaign activity.”

Mark instructs locals to make the letter available on the campaign literature tables required in each hall. The same document will appear in an upcoming issue of Teamster magazine and on the Teamster website for the remainder of the election period.

TDU lawyer Harvey said of the election supervisor’s decision, “It’s an important reminder to incumbents that they cannot buy political support with union funds, and to reformers that winning this election can happen with commitment, hard work, and more hard work.”

KNOWING THAT HOFFA HAS ADMITTED TO OFFERING PENSIONS AND JOBS TO BRIBE AND KNOWING THAT OUR PENSIONS ARE BEING REDUCED, HOW CAN ANYONE VOTE FOR HIM A THIRD TIME?