No Concessions Protest Jazzes Up Madison 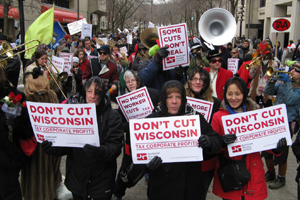 The action challenged not only Governor Scott Walker’s anti-union measures and service cuts but also the concessions offered by public sector union leaders.

Jazz funeral marches are a New Orleans tradition, complete with brass bands. In Madison, death was represented by the countless social service cuts planned by the governor. The state budget Walker introduced last week contained $1.5 billion in cuts to education and local government, and could throw 70,000 people off Medicaid rolls.

Soon after Walker announced his “budget repair” bill February 11, leaders of the statewide teachers union (WEAC), AFSCME, and the Service Employees publicly agreed to accept Walker’s health and pension takeaways—an 8 percent pay cut. As WEAC President Mary Bell explained: “We are prepared to implement the financial concessions proposed to help our state in these tough times. But educators will not allow their voices to be silenced by denying their right to be part of a real union.”

The offer seemed a hurried “public relations” response to the governor, made without consulting members.

Participants said benefits takeaways and Walker’s sweeping cuts to social services should be opposed with the same vigor that labor opposed the removal of collective bargaining rights.

Out of the meeting, a committee planned the “no concessions, no cuts” march four days later.

Barbara Smith, a state employee who works on energy efficiency, said the “no concessions” theme has struck a chord with the rank and file. The march turnout was one indicator: it was planned with only a couple days’ lead time.

“It was so big I never actually saw the coffins, and I could barely hear the band,” said Smith, a member of Wisconsin Professional Employees Council/AFT Local 4848.

The “no cuts, no concessions” group planned further actions at a Sunday night meeting.

They had a lot to talk about: Walker has threatened to lay off 1,500 state workers if his bills slashing social spending and attacking collective bargaining aren’t passed.

The state has sent 30-day layoff notices to the unions of all state employees. Smith describes the notice as a “vague statement saying the state’s planning to lay off workers in that bargaining unit.”

If Walker actually goes through with the layoffs, individual workers will get an “at risk” notice 14 days ahead of the layoff, Smith said, adding that management has used these “at risk” notices effectively in recent years to intimidate people into retiring or leaving voluntarily.

“Often they are handed out in a discriminatory way to the most senior workers,” she said. “The union stewards try to tell workers they should not get intimidated because senior workers have bumping rights and can push the layoff to less senior people in their job classification. But many workers bolt anyway.”

Related
After Strike Threat, Wisconsin Nurses Get a Possible Path to Union Recognition »
Wisconsin Nurses Set to Strike, As Employer Claims It's Banned from Bargaining »
Open Bargaining Brings the Power of Members to the Table in Berkeley »
Employers Are Using the Crisis to Push Concessions They Don't Need »
New Jersey Welfare Workers Sound the Alarm on Safety »