Wisconsin: ‘As Long As It Takes’ 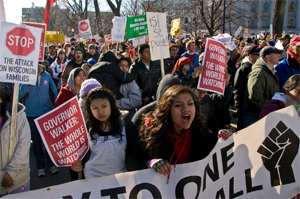 Tens of thousands marched in Madison this weekend as cracks appeared in the Republican caucus. Meanwhile, some union leaders have announced they will accept the governor’s economic takeaways. Rank and filers say they've already given too much. Photo: Sue Ruggles.

The spirit in Wisconsin is best captured by two teachers from Janesville sitting on the stairs inside the Capitol. They’re holding the sign that’s everywhere at these protests—“Care about Educators Like They Care for Your Child.”

The two answered their union’s call and headed to Madison. They arrived with 120 other educators from Janesville, where schools were closed Thursday and Friday due to the teachers’ sick-out. The protests that have jammed the state Capitol are the first political rallies they have joined—ever.

But the two teachers wouldn’t reveal their names. Janesville administrators had implied there “may be some consequence” for truant teachers.

Governor Scott Walker has proposed legislation that would crush teachers’ and other public workers’ unions. It would stop their ability to collect member dues through payroll deductions and end any requirement that employees pay union dues at all. It would require union bargaining units to hold an annual certification vote in order to maintain representation.

So the teachers had to come.

“This is so serious,” one Janesville teacher said. “This is about a democratic principle that’s at stake.”

The teachers’ unions have announced a return to work on Tuesday, following the Presidents’ Day holiday. But all of Wisconsin labor plans to continue actions at the Capitol and around the state, said Jim Cavanaugh, president of the Madison-based South Central Federation of Labor. They will continue holding two rallies a day at the Capitol, at noon and 5 p.m.

The labor federation endorsed a call for a general strike Monday night, possibly to take place the day Walker signs his "budget repair" bill. While a federation cannot declare a strike, it can educate affiliated unions and members on the organization and function of a general strike. That work began immediately.

Thousands of union members, students, and community supporters are still circling the mile-long square surrounding the statehouse, while thousands more pack the floors and stairs inside the building’s grandiose rotunda, chanting “Kill the Bill” and “This is what democracy looks like.”

While the rank and file have responded passionately to the call to defend their unions, not all are happy with the union stance on the governor’s economic proposals.

The state’s public sector labor leaders—including AFSCME Council 24 Director Marty Beil and Mary Bell, president of the Wisconsin Education Association Council (WEAC)—have announced they will accept the governor’s economic takeaways if he backs off his anti-union measures. The pension and health care takeaways would mean an 8 percent pay cut.

“We’re already deep in the hole,” said Harry Richardson, a 12-year mail clerk and AFSCME member at the University of Wisconsin. “I took a 3 percent pay cut from furlough days.”

What irks Richardson the most is that the members weren’t consulted when Beil made his concession decision. “We learned about it in the papers,” he said. “People might even vote for it. But we should be asked. That’s why people are in this union. It’s because they want a voice.”

Wisconsin’s 14 Democratic state senators left the state late last week in order to prevent the senate from achieving the quorum necessary to pass the bill, and have vowed not to return until the Republicans rewrite the bill to permit collective bargaining.

Two-thirds of corporations pay no taxes in Wisconsin, and the share of state revenue from corporate taxes has fallen by half since 1981, according to National Nurses United’s research arm.

“Working people did not create the recession or the budgetary crisis facing Washington or state or local governments, and there can be no more concessions, period,” said Rose Ann DeMoro, NNU executive director.

The tens of thousands that flooded the capital over the past week were led in no small part by the teachers’ bold sick-out.

It was recommended last Wednesday by statewide WEAC and inspired by the union’s Madison affiliate, Madison Teachers Inc.

MTI had agreed the prior night to hold a three-day walkout. This was by no means an easy decision, says Mike Lipp, MTI president and 37-year high school teacher. The local launched its phone tree and had 120 members turn out at the Rep Council February 15. The two-and-a-half-hour discussion was heart-wrenching and emotional.

“Most of our teachers are elementary and middle school teachers,” Lipp said. “It’s very important that they are with the kids. There’s a very strong bond.”

The young teachers were particularly concerned. They’re on three-year probation.

But the meeting calmed concerns and the final vote supporting the sick-out was about 95 to 2.

“There’s a reason we have public sector unions,” said Lipp, and it’s about the right to redress a grievance without fear of retribution. “You’re gonna be on five committees,” Lipp said, describing a non-union teacher’s life. “You’ll have to stay here every night after school till six o’clock. And if you don’t do that, I’m gonna put you in that corner classroom that has no heat. I’m gonna give you 40 kids. I’m gonna fire you if you don’t toe the line.”

The teachers are fighting for the right to recourse, he said.

MAD IN THE PARKS DEPARTMENT

Kay Nelson, an AFSCME member who works for the city of Madison’s parks department, said municipal workers haven’t seen a raise in three years. She pointed out that public workers in Wisconsin already make 4.8 percent less than private workers with similar qualifications.

“They’re going take away our rights now?” Nelson asks. “I mean, we’re already struggling as it is. And they’re gonna make it worse for us. Everyone’s pretty mad.”

For Nelson, the union means a lot more than just a fair paycheck and benefits. She had worked in a unit where the supervisor had a history of sexually harassing the women. Nelson was the only one willing to stand up. Her union rep helped her transfer to a different job, and the supervisor ended up stepping down. Nelson’s at the Capitol, in part, to return the support she received.

Even if the teachers union is calling members back to work, Cavanaugh says the pressure will continue. Each union has planned a sleepover inside the Capitol on a different night this week, where they will join University of Wisconsin students who have held a continuing 24-hour occupation. A local pizzeria is delivering pies to the Capitol protesters ordered by supporters from around the world—one such solidarity order was phoned in from Egypt.

Rallies and lobbying roll on across the state, with particular focus on pressuring Republican state senators. To deny Walker a majority, just three need to break from his proposal. One, Dale Schultz, offered a compromise position over the weekend that would strip collective bargaining now and restore it in 2013.

The cracks in the Republican caucus gave protesters hope—although many derided the compromise. Collective bargaining is not up for discussion, they say.

“We’re gonna stay here until we’ve made a difference,” said one of the Janesville teachers. “As long as it takes.”

Hey everyone, show your support to the workers of wisconsin by joining the facebook page 'Wisconsin, the World Stands With You'