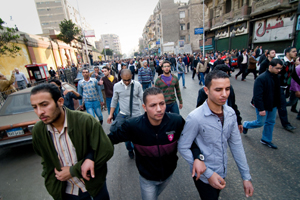 Today, workers’ strikes became part of the protests that are rocking Egypt, with more than 20,000 workers out and more scheduled for Thursday. Photo: Claudia Wiens / Alamy

Though all eyes are on Cairo and its Liberation Square, few could know that Egyptian workers have been protesting and striking in huge numbers for years.

In a 2009 AFL-CIO report Stanford historian Joel Beinin wrote, “The current wave of protests is erupting from the largest social movement Egypt has witnessed in more than half a century. Over 1.7 million workers engaged in more than 1,900 strikes and other forms of protest from 2004 to 2008.”

Today, workers’ strikes became part of the protests that are rocking Egypt, with more than 20,000 workers out and more scheduled for Thursday.

The New York Times reported that in the textile town of Mahalla, more than 1,500 strikers blocked roads and that more than 2,000 workers from the Sigma pharmaceutical company in Quesna went on strike.

Labor Notes interviewed Kamal Abbas, director of the Center for Trade Union and Workers Services, an independent group, about workers’ participation in the Egyptian revolt.

Labor Notes: The media said around 20,000 factory workers stayed away from work on Wednesday. Where did they work?

Kamal Abbas: This day in the revolution could be named for the labor unions. They have moved all over, with more than 20 strikes in the railroads and also textiles, nurses and doctors, a hospital, in government-owned factories and also private. The numbers are more than 20,000.

Independent journalists have been publicizing the corruption, that $3 billion are somewhere missing. The Guardian published $12 billion for the Mubarak family. This has provoked horrible disgust, in a country where 40 percent are under the poverty level. Now the demands are “I want my rights, where are our rights?”

LN: Were women involved in the strikes?

KA: Yes, of course, the textile workers were 1,200 people. Also a hospital participated.

Eight million people in the country are participating in the protests. There are a million people in Tahrir Square, and there are thousands of workers among them. In the people’s movement, they are learning its lessons. Of course, the working class is apt to organize, and they have been moving in a very deliberate, organized way to make demands.

LN: Were today’s strikers demanding pay increases or that Mubarak should go, or both?

KA: Today they are asking for both.

Let me emphasize a good development: we expect one of the textile factories, with 24,000 people, to go on strike tomorrow.

LN: Tell us more about the strike wave of the last few years.

KA: There were 3,000 strikes which included all sectors, both government and private. Of course, these actions were making economic demands—higher pay. The prime minister claimed that 90 percent of the demands were accepted and executed. We have a minimum wage of $60 a month now. It used to be much less before [just $6 a month, stuck at that level since 1984].

LN: Is there a connection between those strikes and the current protests? Did the strikes raise workers’ expectations?

KA: Yes, no question. It’s not just my opinion. There’s no question that that pattern led to involving and breaking the fear of the rest of the people, among them more workers.

LN: Has the official government union federation, the Egyptian Trade Union Federation (which is the only legal union), been involved in the protests at all?

KA: They still are on the side of Mubarak. But they have disappeared. They don’t even appear at all. Yesterday, for example, the strikers resolved to remove the leadership. They talked about corruption and going to the prosecutor.

On January 30 a new federation was established, the Federation of Egyptian Trade Unions (FETU), across many cities, both private and public sector. It has been recognized across the globe, in Germany, the AFL-CIO, the International Labor Organization. Therefore the Egyptian workers actually turn a new page, breaking the pattern of what was past.

Ever since 1952 [when Gamal Abdel Nasser took over the government], the government tried to stop trade unions and put many leaders in jail. They established a loyal trade union, the ETUF. Our struggle never stopped but it was repressed very hard. I personally participated in a strike when I was working in Helwan [an industrial suburb of Cairo] with the steelworkers; 1,000 people participated. Security used all kinds of live munitions, tear gas, rubber bullets. One person was killed and 1,000 people were jailed. They served one month to three months.

KA: It varies from sector to sector. If we take starting teachers, they are actually temporary workers. They make about $34 a month. The older ones take more. Other governmental workers, about 5 million people, make about $70 a month. In the private sector, $110 a month.

Egyptian society suffers from two things: hiking prices all the time and of course unemployment. We have 7 million people unemployed [about 10 percent of the workforce].

LN: And many are not considered part of the official labor force?

KA: Four million people are without any rights to health care, anything. They are not even recognized as part of the working force in any contractual way.

LN: What happens if Mubarak refuses to leave? Will many people go to jail?

KA: This revolution will never stop until he goes. We don't want his trial, we just want to get rid of him. At least for now.

There are many scenarios that are being discussed. People are blocking roads, there are clashes, millions of people are pouring out every day to Liberation Square. Five people got killed in the Wahat area on the east side of Egypt. A security center was burned down.

Next Friday nobody will predict the numbers, there may be 8 million people all over the districts. All scenarios are possible.

The news is showing clashes within the government, between the army generals and Mubarak. I am not impressed with the fact that the army is friendly. Some sort of American intervention may develop, but we don't know. These are all possibilities.

LN: Yesterday some unions demonstrated at Egyptian embassies around the world, to support the protesters. What can American workers do to help your cause?

KA: We expect you to continue the pressure on Obama, because he still continues supporting Mubarak and his regime.

Many thanks to Hasan Newash of Detroit for translation.