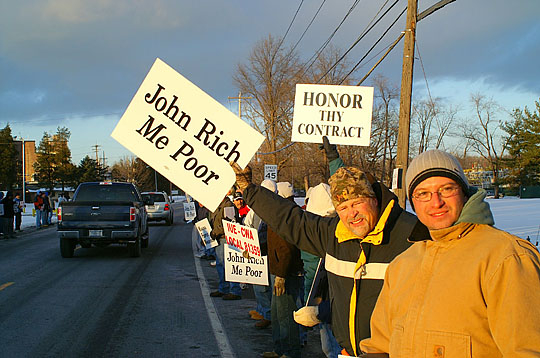 Braving freezing temperatures not far from the shore of the Hudson River, members of IUE-CWA Local 81359 walked out January 12 for a two-day grievance strike.

The anger fueling the strike sprang from members’ deep sense of injustice over drastic unilateral pay cuts imposed by their employer, Momentive Performance Materials, in January 2009.

About 400 workers had their pay slashed up to 50 percent by the hedge fund-controlled corporation, which bought the company from GE. Momentive processes silicones and silicone derivatives into adhesives and sealants in the plant near Albany, New York.

The union contract contains the right to strike or seek arbitration after the third step of a grievance has been exhausted. Last year, members authorized grievance strikes twice, prompting Momentive to settle within a day.

But this time, the company didn’t blink. The grievance in question protested a worker’s 30-day suspension over a safety issue, with the union claiming no similar violation had merited such a long suspension before.

Local President Dominick Patrignani said managers confidently told him, “There’s no way you’ll shut our business down over this.”

But the production, maintenance, and warehouse workers authorized a strike. So did the smaller technicians’ local, over another matter.

“It was the principle behind it—the punishment was unjust,” Patrignani said. “They have been totally disrespectful to the workforce.”

Management called plant-wide meetings and threatened to terminate health care and life insurance for the duration of any strike.

Managers threatened to lock out workers for three days following a strike, wielding a new cudgel they gained in the last contract.

“That actually helped our cause,” Patrignani said. “It convinced everybody how low they would go.”

The local responded by guaranteeing it would pay the costs for any member who suffered a medical emergency. And when the time came, both locals walked out together.

“Our people couldn’t wait,” Patrignani said. Managers stayed locked inside, “trying to keep the plant from freezing like a popsicle.”

Momentive lost almost five days of production, as it was forced to wind down production a day before and slowly kick it back up afterward. Patrignani called the bull-headedness a “$3 million mistake.” But the company held firm, offering no settlement for the grievance.

Patrignani has nurtured an activist culture at the local since the beginning of the wage-cut fight, lending support to every rally and picket line in the area. The solidarity was repaid in kind, with teachers, nurses, Teamsters, Jobs with Justice activists, and local labor councils all bolstering picket lines.

Building trades unions with members doing contract work at the plant ensured that no one crossed the line.

The IUE local had been somewhat divided lately, as a group of workers talked decertification. They were upset over the contract forced on them by the International last summer, which left them far behind the wages they once enjoyed.

The agreement last June settled unfair labor practice charges and gained members $13 million in back pay and bumped wages up by $2 an hour—dropping the pay cut to 38 percent for some.

“They thought they could split us, but it brought people together,” he said, adding that now, “the members want to do it again.”

The local has filed 200 grievances since last summer’s contract settlement. Seven more of those have cleared the third step, and are ready and waiting.