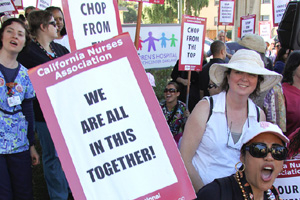 For many unionized workers, just staying in place these days takes a knock-down fight. Nurses in Oakland held a three-day strike over attempts to increase their health care costs. Photo: California Nurses Association.

For many unionized workers, just staying in place these days takes a knock-down fight. Nurses in Watsonville, California, went back to work Friday after a one-day strike over staffing turned into a three-day lockout.

In Oakland, nurses at Children’s Hospital took a three-day strike to fend off management’s bid to make them pay a rising share of health insurance costs.

Nurses in Wilkes-Barre, Pennsylvania, have mounted 40 informational pickets, collected 10,000 signatures from the community, held two big rallies, and waded through 16 months of slow-motion bargaining to ward off a health insurance scheme that would leave them at risk of medical bankruptcy.

In the hotel industry, hotel owners are recovering profitability but refusing to share the gains with their workers. At bargaining tables across North America, management is stalling negotiations and pushing backbreaking workloads that would lead to layoffs.

In response, several thousand union hotel workers have walked off the job in strikes lasting from 24 hours to two weeks. More than 3,000 workers struck hotels in San Francisco, Honolulu, and Chicago in the last month, and thousands more pulled off rolling strikes in Toronto. The workers involved are members of UNITE HERE.

“They’ve cut staffing to the quick,” said Tim Thomas, an operating-room nurse and the California Nurses Association’s chief rep at Watsonville Community Hospital. “I can take care of five patients, but if I’m on my own, how can I lift them? How do I get a break?”

Nurse-to-patient ratios are regulated by law in California—unique among all states—but Thomas said it takes a strong union to enforce those rules. Union bargainers have waited nine months for management to respond to their proposals around meals and breaks.

Employers are looking to take advantage of workers’ fear and uncertainty.

“They’ve never not cried poverty,” said Martha Kuhl, an Oakland nurse and
CNA’s treasurer. “But when asked point-blank, they say they can afford to pay. They just want to get their operating margin better so they can get better bond ratings to compete in the health care marketplace.”

As in Oakland, the Pennsylvania nurses are facing down huge hikes in health care costs. And like the Watsonville nurses, they’re locked in endless bargaining. They’re preparing the unfair labor practice charges that will allow them to strike and not face permanent replacement.

CHS raked in $306 million last year, a whopping 40 percent increase over the previous year. The chain operates in rural areas and small towns, preferring a near-monopoly in small-market health care.

The company is demanding that workers take a Swiss-cheese insurance plan that doesn’t cover anesthesiology or radiology, opening workers to eye-popping bills if they develop serious illnesses.

Fran Prusinski, a Wilkes-Barre coronary critical care nurse, says CHS boosts its margins with aggressive bill collection. After her niece fractured vertebrae in an accident, a collection agent came into the hospital room to demand a $200 down payment. She says CHS carefully monitors patients’ credit, to the point of offering advice about which credit card has a high enough limit to cover the hospital bill.

“All they see are insurance cards and dollars,” Prusinski said. Wilkes-Barre nurses and reps with their union, PASNAP, came to Watsonville for the CNA’s strike, and Prusinski said she’s anticipating similar action will be necessary in Pennsylvania.

The scene looks much the same among union hotel workers: bold employers, drawn-out bargaining, and unions launching intermittent short strikes to keep up pressure.
Hilton is now UNITE HERE’s target because the union judges that company most likely to move—a shift in strategy after months of rolling strikes and pickets against the Hyatt chain.

The union hopes to establish a pattern at the bargaining table with Hilton that other hotels will follow.

Chicago hotel workers authorized strikes at four Hilton-owned or -operated properties. They struck the Hilton Chicago for three days in October, coordinating with Hilton workers in Honolulu and San Francisco. Those strikes ended October 19, but more may be on the way.

Workers in Toronto took advantage of the Toronto International Film Festival in September to gain visibility for their struggle. Rolling one-day strikes at three hotels, including festival headquarters, caused actors Martin Sheen and Emilio Estevez to join the boisterous picket line. The blare of vuvuzelas added to picket-line noise.

Workers rolled out a red carpet and offered passersby the opportunity to have their photo taken with a hotel worker. Inside, workers spotted the housekeeping manager doing bell work.

Six additional one-day strikes have cascaded through Toronto hotels since the film festival. And 500 workers walked out of the Delta Chelsea, a large downtown conference hotel, on October 28. Delta Chelsea workers say they’ll stay out for two weeks.

Cristal Cruz-Haicken of UNITE HERE Local 75 said the two-week strike was necessary because “they weren’t even taking us seriously” at the bargaining table.

Unstable work schedules and job security are a serious problem. Feliz Serrano, a server, said he has worked there 30 years and still usually only gets 30 hours of work a week, but only if he works six days in a row.

Room attendant Jian Ying Liu said the hotel has tried to get rid of her three times because of injuries she received in her 18 years of work there.

Several conferences immediately moved because of the strike.

LOCKING IN THE RECESSION

In the U.S., Hilton workers have been working without a new contract since August 2009. They charge their employer with trying to lock the recession into their wages and workloads even as the hotel industry recovers profitability.

But the hotel chain is trying to squeeze more work from the existing staff. Hilton is proposing that workers who currently clean 14 rooms a day clean 20, with the result that some workers will be laid off.

UNITE HERE members call Hilton’s push to increase their workload the “dirty rooms” program, pointing out that Hilton is reassuring workers they won’t have to meet the same high standards of cleanliness when they’re required to clean 40 percent more rooms.

The average Local 2 member in San Francisco makes $30,000 a year, and if Hilton gets its way workers will soon be paying $173 a month for family health care coverage.

According to Local 2 staffer Riddhi Mehta-Neugebauer in San Francisco, workers have foregone raises over the years, preferring to maintain affordable health coverage. The new $173 per month amounts to a huge takeaway.

Hilton is resisting the union’s proposal that the company put aside an extra 12 cents per hour for pensions, which, UNITE HERE calculates, would mean the difference between a $900 and a $1,200 monthly pension.

Meanwhile, management’s pay is up. According to a Wall Street Journal survey, Blackstone’s executive team got a 12 percent pay increase this year.