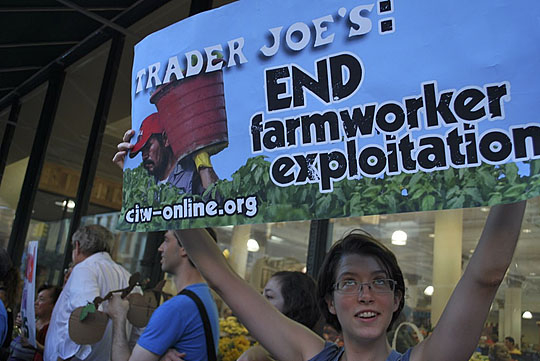 The Coalition of Immokalee Workers' dogged campaign against corporate buyers of tomatoes— like Trader Joe's and other grocers—has been a successful recent attempt to get around the ban on secondary boycotts. Farmworkers target big companies instead of their own employers. Photo: AndaLaLucha.

Solidarity is the heart and soul of unionism—the only force capable of confronting power and privilege in society. To revive unionism, we must recover labor’s long-lost tools of workplace-based solidarity.

Today, union activists join each other’s picket lines and hold fundraisers for striking workers. While important, these acts of solidarity are largely conducted away from the workplace.

In contrast, labor’s traditional forms of workplace-based solidarity allowed workers to join across employers and even industries to confront bosses. Such tactics included secondary strikes and industry-wide strikes.

In the past, solidarity tactics allowed workers to hit employers at multiple points in the production and distribution chain. By impeding the flow of supplies into a plant, unions pressured the employer to settle a strike or recognize the union. Similarly, secondary boycotts pressured retailers to stop selling struck goods.

Solidarity tactics expanded the site of the conflict, allowing workers to confront employers as a class. Many of the strikes we know from history, like the 1912 Lawrence Bread and Roses textile workers’ strike or the huge postwar steel strikes, are great and historic precisely because they involved tens of thousands of workers across entire industries.

More recently, the UPS strike of 1997 involved 200,000 Teamster drivers and loaders and captured the imagination of union and non-union alike.

From the earliest days of unions, workers understood the need to unite with others in their industry to seek common standards. Otherwise, workers winning wage increases at one company would be undercut by other companies that failed to match the raises.

Thus in the 1940s through the 1970s, unions negotiated industry-wide or pattern agreements, at times covering hundreds of thousands of workers. Along with this broad scope of bargaining came major confrontations between workers and employers.

But in the 1980s, in the face of a deep recession and a legal system hostile to solidarity, and with unions failing to mount effective strikes, the patterns and therefore union standards began to crumble. As this publication argued earlier this year, “After a 30-year employer onslaught, national patterns have been largely devastated or have become top-down conduits for concessions.”

Today, the most powerful forms of solidarity are outlawed. Secondary strikes and workers’ refusal to handle goods from struck plants were banned by the Taft-Hartley Act in 1947. The Landrum-Griffin Act in 1959 closed a loophole unions had used in the 1950s, in which the union would negotiate “hot cargo clauses” where the employer agreed not to use struck goods.

At a deeper level, modern labor law forces unions to bargain with individual employers rather than establish standards on an industry basis. Over the decades since the passage of the National Labor Relations Act in 1935, the Supreme Court tightened the noose on industry-wide tactics.

The court allowed employers to unilaterally opt out of multi-employer bargaining and made it an unfair labor practice for a union to insist on such bargaining. So by the 1980s, employers wishing to break free from pattern agreements had the law on their side.

To be clear, the downfall of solidarity cannot be attributed solely to legal factors. Unions willingly agreed to no-strike clauses. Over the years, many focused on just the needs of their own members, failing to embrace a social unionism that looked out for the interests of all workers. In the 1980s and afterwards, unions often failed to defend their pattern agreements, allowing special deals for particular “troubled” employers until the pattern was no more.

And union officials all too often squashed rank-and-file attempts to join together across bargaining units, even at the same employer. So, for example, striking meatpackers at Hormel in the mid-1980s were attacked by the United Food and Commercial Workers International for attempting to expand picket lines beyond the Austin, Minnesota, plant.

GOING AFTER THE BIG GUYS

The best current demonstration of the power of secondary activity comes from farmworkers. The Coalition of Immokalee Workers in Florida forced Taco Bell and other huge corporations to increase pay for tomato pickers in their supply chains.

Rather than target the subcontracting growers, CIW pressured the major corporations that purchase the farm produce—companies whose financial interest in the dispute is relatively indirect.

CIW’s work shows the power of an industry-wide approach. Targeting individual growers would not have succeeded, because a grower paying higher wages would not have been able to get Taco Bell to buy its products.

CIW mirrored SEIU’s successful Justice for Janitors campaigns of the 1990s, which made life difficult for all levels of the contracting chain, including the end-users of janitorial services as well as workers’ immediate employers, and sought industry-wide agreements in a city.

For almost 30 years, most union activists have tried to ignore the fact that restrictions on solidarity hamstring our movement. We’ve been told that organizing new members and conducting corporate campaigns can revive the labor movement. It’s not working.

To spread their fight to a much bigger site, rank-and-file workers from Philadelphia set up picket lines at the major New York/New Jersey ports. Workers there honored the picket lines for two days—despite an injunction from a federal judge and the opposition of their international union.

After two days, Del Monte promised to negotiate and workers pulled the picket lines. Workers rediscovered a real sense of collective power, but anemic follow-through from the International means the Philadelphia local is looking at a long fight to win back their work.

Still, workplace-based solidarity and expanding the dispute were crucial. The Philly workers pulled their natural allies, other longshore workers concerned about non-union ports, into the dispute. They made other corporations—all those trying to ship goods into New York or New Jersey—feel pain as well, by tying up shipping for two days.

Longshore workers occupy a strategic spot in the U.S. economy. Their struggle illustrates why workplace-based solidarity is outlawed—precisely because it is so effective.

But the labor movement has little choice. As AFL-CIO President Richard Trumka noted in the early 1990s, unions need “their only true weapon—the right to strike. Without that weapon, organized labor in America will soon cease to exist.”

Joe Burns’ book Reviving the Strike: How Working People Can Regain Power and Transform America (IG Publishing) will be published in May 2011.

A version of this article appeared in Labor Notes #380, November 2010. Don't miss an issue, subscribe today.
Related
Ten Thousand UAW Members Gear Up for a Strike Vote at John Deere »
Bottom-Up Labor Solidarity for Palestine Is Growing »
Viewpoint: We Must Prepare to Strike UPS in 2023 »
At a Convention Like No Other, Teamster Challengers Turn a Corner »
Volvo Workers Forced to Vote Again on Contract They Just Rejected »

then there's the bad example...Teamsters in New Jersey who work at the White Rose warehouse are picketing some Foodtown supermarkets at the Jersey Shore that are switching to an out-of-state non-union warehouse supplier. Not only is the UFCW not honoring the lines, they ran a full page ad in the Asbury Park Press (paid for by the employer) asking people to continue shopping at the stores. And the stores have big signs saying their beloved unionized employees have no quarrel with Foodtown. Anyone in TDU know what's going on here?