The Numbers Are In: Trade Deals Fail to Deliver 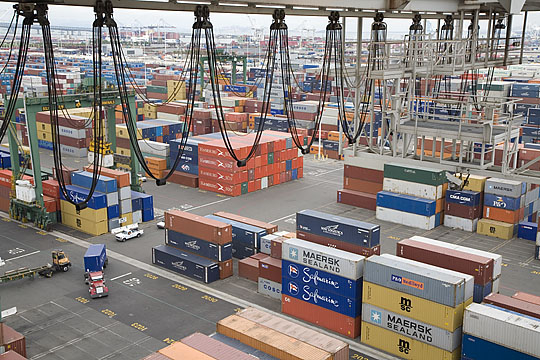 Exports from the U.S. have lagged to countries that have NAFTA-style trade agreements, a new study says. Photo: Jim West.

Remember when American workers were promised that trade pacts based on the North American Free Trade Agreement (NAFTA) model would boost exports and create millions of jobs in the United States?

Since President Obama set a goal in his State of the Union address this year to double U.S. exports over the next five years, corporate lobbyists have been claiming that the way to do so is to implement a slew of NAFTA-style trade deals. Agreements with Colombia, South Korea, and Panama are pending.

The lobbyists should have checked their facts before running with this claim. Public Citizen’s new report, “Lies, Damn Lies, and Export Statistics,” crunched the numbers and found that exports to countries that have NAFTA-style trade agreements with the U.S.—such as Mexico and Australia—have grown at less than half the rate of exports to all other countries.

In other words, the data don’t support the corporate sales pitch.

If U.S. exports to trade deal partners like Guatemala and Singapore had simply grown as fast as exports to other countries, the U.S. would have exported $33 billion worth of goods more in 2007 alone. That could have supported tens of thousands of well-paying jobs.

But these exports lagged, joining with rising imports to create a deadly combination for manufacturing workers: since NAFTA was implemented in 1994, 4.9 million U.S. manufacturing jobs have disappeared.

Our results may be somewhat surprising. How can reducing trade barriers, as these NAFTA-style pacts do, harm exports? The truth is that these trade agreements do not deal just with trade, despite their name.

NAFTA-style deals give multinational corporations unprecedented rights to sue a national government for compensation if the government takes action that reduces corporate profits. Any government regulation, including worker protections, environmental regulations, or safety standards, can be targeted under these rules.

Once a U.S.-based multinational corporation was granted these extraordinary rights to challenge regulations, there was an incentive to move its factory to Mexico, in addition to the incentive of low wages. The company would know that any new safety and environmental regulations enacted in Mexico that might reduce its profits could be swatted down with a NAFTA challenge.

No longer would the corporation’s product be made in a U.S. factory and exported to Mexico. The workers in that U.S. factory would lose their jobs. These unprecedented rights granted to foreign investors are one explanation for the slower growth of exports to these trade agreement partners.

President Obama pledged during his campaign that he would fix NAFTA and fully incorporate strong labor, environmental, and public interest protections into a new U.S. trade policy. Yet this June, President Obama announced that he would take up the Korea trade deal President Bush negotiated. As of now, we don’t know if he will try to make the deal consistent with his campaign pledges.

Now the TRADE Act gives worker advocates a detailed statement of what we are for.

The TRADE Act would require that future U.S. trade agreements contain strong, enforceable labor rights protections in the core text of agreements (not side agreements), tough rules to protect the environment, and provisions to address unfair currency manipulation. Most countries have already agreed to the labor rights protections in the TRADE Act through ratification of international conventions on the right to collectively bargain, but the TRADE Act would ensure that the rights are enforced when we enter into trade pacts with these countries.

The TRADE Act also strips out the harmful language that has facilitated a massive corporate power grab. This means no more corporations suing governments because they put regulations in place, no more clauses encouraging privatization of services, no more banning “Buy American” rules in government purchasing.

President Obama could excite the union members who elected him by coming out in strong support of such a pro-worker policy. He doesn’t even need to worry much about getting Congress behind the vision in the TRADE Act, since a majority of Democrats in the House of Representatives already have co-sponsored it. Almost all Senate candidates in competitive races have endorsed its principles, too.

As Public Citizen’s number-crunching has demonstrated, NAFTA-style trade agreements haven’t helped get more stuff that’s made here sold elsewhere. To boost exports and create millions of American jobs, the old NAFTA model must be abandoned and a new vision for trade expansion should take its place.

Travis McArthur is the trade and finance researcher at the Global Trade Watch division of Public Citizen. Download the study and read more about the TRADE Act.

A version of this article appeared in Labor Notes #380, November 2010. Don't miss an issue, subscribe today.
Related
George H.W. Bush: Not So Civil After All »
NAFTA 2.0: What's the Deal? »
Viewpoint: The Agenda of the Mexican Working Class »
NAFTA Talks: What's the Deal? »
Canada GM Workers Strike, but Can’t Get Guarantee on Jobs »