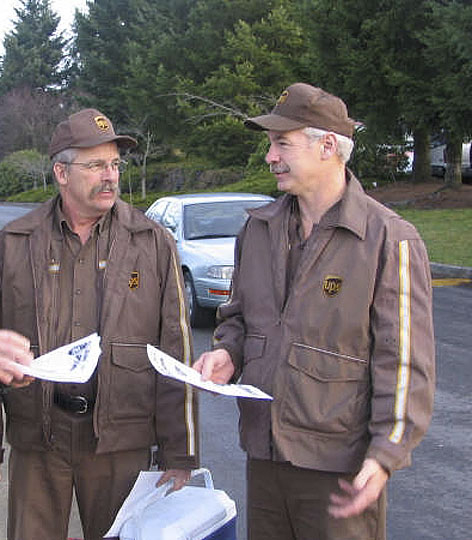 UPS Teamsters talk about a campaign leaflet. Don't let your flyers be a substitute for talking to members. Use them to start conversations.

When you’re running for local union office, good campaign literature can help you tell members what you stand for and why you should you get their votes. But bad lit can make you look weak, defensive, whiny, unqualified, or all of the above.

How do you make the most of your election lit?

Get help and advice from someone experienced. Ask winning candidates in other locals. Find folks with experience both in union politics and in design.

Keep it neat and clean. Effective literature does not have to look expensive. It should, however, look professional. You want the members to see that you’re smart and competent; you don’t want to give your opponents ammunition by passing out sloppy literature.

Use good photos, to show competence and professionalism.

Use photos and quotes from members who endorse you. Public support from a variety of members will impress voters.

Double-check all your facts. Your credibility is a big asset. Make sure each piece of literature is factual.

Translate your literature if your local has significant numbers of non-English speakers.

Focus on issues that interest all members, like pay, working conditions, benefits, and representation, rather than internal union questions.

Don’t make your lit all by yourself. Get someone else to help—and definitely get a second opinion on all the literature you put out, from people inside and outside your inner circle.

Don’t be too negative. Some negative campaigning is appropriate, but too much can turn voters off. A good rule of thumb is to keep the criticisms to just 25 percent of your lit. Name-calling (“moron,” “SOB”) is never effective.

Don’t criticize without offering solutions. Tell members how you will make things better, not just what your opponents have done to mess things up.

In one local, officials accused an opponent of siding with management in a disciplinary case, a very serious accusation. The team knew they had to respond. They gave a clear, factual account of what really happened and moved on.

Don’t be too wordy. Members will not read long, complicated campaign literature. Keep it brief and to the point. A good rule of thumb—keep all your paragraphs to four lines or less.

Don’t talk inside baseball. Focus on the critical issues facing members—not unfamiliar debates about the wording of bylaws or union process. Don’t use campaign literature to address individual gripes or arguments. Remember, this literature is for the members, not for you.

How do you get members to pay attention to your platform for change?

“When we first started talking to people, they said ‘It’s not going to make a difference,’” said Walter Taylor, a long-time reformer in Teamsters Local 814 in New York, now a rep in the local.

“So we got specific. We told members how we were going to fight to win back our medical benefits, get pension contributions for casuals, and save 25-and-out retirement. That gave members a hope that we could make a real change. After we won, we stuck to our reform agenda and actually accomplished those things.”

Be specific. Talk about how you will achieve results—not just the general goal you hope to achieve. Planks like “Start a steward training program,” “Implement a grievant’s bill of rights,” and “Require union reps to visit worksites each morning” are all better than “Improve representation.”

Focus on the workplace. Most members are concerned about what you can do to make work better. They’re less likely to care about changes you’ll make to union meetings and procedures—you’ll need to show why those changes would matter.

Don’t make promises you can’t keep. If your local or your contract is in serious trouble, it won’t be easy to turn it around quickly. Instead, talk about steps you will take to shift direction and start making improvements for the long term.

“You can count on the other side to attack you,” warns Leonard Stoehr, recording secretary of Teamsters Local 728 in Atlanta. “You need to be smart in how you respond.”

Here are some things to think about in planning your response:

Do you need to respond? The other side wants to put you on the defensive. You don’t have to respond to every attack. Sometimes the best reaction is no reaction.

“Our opponents put out an anonymous flyer that asked 25 leading questions about our slate and our record,” Stoehr said. “It was full of innuendos.

“We didn’t put out an official response. But we talked to members of our team, so that we were all ready to respond when members asked us questions about the other side’s attack.”

Stoehr says when you get hit with an anonymous attack, point it out—it will make the attack look less serious.

Keep talking about your issues. Your opponents want you talking about their issues, not yours. If you need to respond, do it decisively, then move on.

“When we did respond, we always kept our responses short, factual, and to the point. That way we stayed on the offense,” Stoehr says.

Warning: Don’t let your lit do the talking. Good literature starts conversations, gets members talking about the issues, and makes a strong impression. Professional-looking literature shows you are serious and organized.

But many candidates make the mistake of thinking that good literature can do your campaigning for you. Good lit is a tool to help you talk to members. It’s not a substitute.

Adapted from the new guide Running for Local Union Office. The book includes chapters on election mailings, websites, mass email and texts, and Facebook. Available from Teamsters for a Democratic Union.

A version of this article appeared in Labor Notes #380, November 2010. Don't miss an issue, subscribe today.
Related
Auto Workers to Vote on Direct Elections »
Can Auto Workers Win the Right to Vote? Here's How Teamsters Did It »
Beware of the 'Easy' Way »
A Bad Day for Hoffa: Chicago Teamster Leader Joins Opposition Slate »
Reformers Take Back the Reins in New York City UPS Teamsters Local »