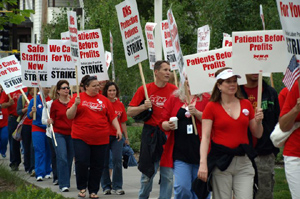 Twelve thousand nurses in the Twin Cities authorized an open-ended strike Monday night after a one-day action June 10. Like every state except California, which has mandated nurse-to-patient ratios, the major issue in Minnesota is staffing. Photo: Chris Reinke, MNA.

Twelve thousand nurses in the Twin Cities are fending off a well-coordinated attack on our union by corporate health care interests. We took a one-day strike June 10 and authorized an open-ended strike by 84 percent Monday night.

After the one-day strike, four of the 14 Twin Cities hospitals in bargaining with the Minnesota Nurses Association retaliated with a selective lockout that stretched for days.

One hospital told nurses not to report for duty again unless called back, while another closed units and canceled shifts. To implement the selective lockout, hospital security guards forced nurses returning from the strike line into a room, where some were held up to two hours. Union stewards were denied access to members in their work areas for days. One MNA staffer sustained injuries as she was forcefully ejected from a site.

The lockout appeared on the one hand random and on the other carefully planned, targeting strongly union rabblerousing units and picking out individual nurses, attempting to sow the seeds of discord.

Negotiations with the hospitals, owned by six corporations, started in March, ahead of the June 1 contract expiration. But little actual back-and-forth has taken place. One bargaining session lasted 12 minutes before management walked out. Another was over after 20 minutes.

ONE DAY OR MORE?

Nurse negotiators from each hospital voted unanimously to recommend the one-day strategy to members ahead of the June strike because it would cause minimal disruption to patients but maximum pain to employers. The one-day action caused significant disruption as hospitals scrambled to find scabs willing to travel for a one-day commitment and scaled back their most profitable service, outpatient same-day surgery, in preparation.

Opinion shifted inside the union after the one-day strike, however, as retaliation and disciplinary threats deepened some nurses’ anger and resolve. In the run-up to Monday's strike vote, big meetings considered whether an open-ended walkout or another limited strike is the better strategy.

The nurses have been building up to this point for months. Hundreds have packed meeting rooms to face management, marched on the boss to say how we felt about assaults on our contracts, and rallied in red union T-shirts at strike vote locations.

"This is a vote we never wanted to take," said Linda Hamilton, a staff nurse at Children's Hospital and MNA president, after Monday's strike authorization. "The hospitals forced us to this point by adamantly refusing to address even a single proposal related to patient safety over the past three months of negotiations."

The major issue in Minnesota is staffing. There are simply not enough nurses at the bedside to monitor the patients, detect subtle changes, and prevent medical errors and preventable complications. It is the same dilemma nurses are facing in every state except one, California, where the California Nurses Association have won legislation requiring hospitals to meet nurse-to-patient ratios.

Much research shows that thousands of hospital patients die every year due to unsafe staffing levels, and many more suffer preventable injuries. Yet our proposals for mandatory nurse-to-patient ratios and to temporarily close overstretched units to new admissions have fallen on deaf ears.

The hospital chains have other plans. They have hired consultants to institute the Toyota lean manufacturing philosophy, to increase the speed of care and replace nurses with less skilled workers. They want nurses to take six days off every year unpaid. They propose to slash pensions by more than a third and eliminate early retirement. The hospitals demand part-time nurses in the name of scheduling flexibility, but are targeting them especially hard, attempting to strip their health insurance, sick leave, and vacations.

The employers claim they need flexibility and expect nurses to float to other units and hospitals where they are not trained to work, somewhat like sending a carpenter to work on electrical wiring for the day.

These “not for profit” hospitals reported nearly $700 million in profits in 2009, and have showered executives with bonuses, plump retirement schemes, and golden parachutes.

MNA has filed an unfair labor practice charge against the employers’ collusion to undermine collective bargaining. Our union is approaching the next phase of its battle with 12,000 nurses swinging this hammer together.

Nellie Munn is an MNA steward, negotiator, and staff nurse at Children’s Hospitals and Clinics of Minnesota.