Labor Notes Conference: ‘I Feel Like a Troublemaker and I am Very Proud to Say That’ 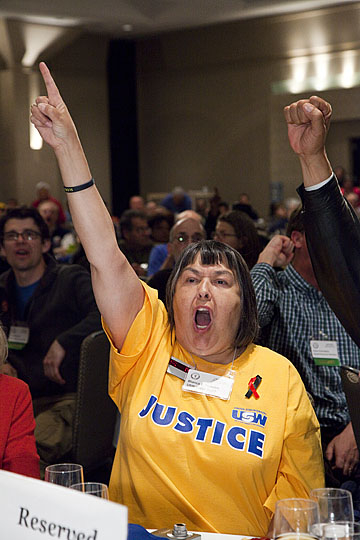 Weeks after the Labor Notes conference the energy is still pulsing. As the strain of economic crisis pulls on every city and workplace, the biggest crowd of labor activists we can remember—1,200 of them—came to Detroit looking for answers, eager to make connections, and ready to turn the ship around.

From the rush of excited hallway conversations to special meetings bringing together unions locked in battles across the continent, this gathering burned with an unprecedented intensity.

There was a rising mood among the participants that labor needs some Plan Bs as the shell game between Wall Street and Washington continues uninterrupted.

The overwhelming sense was that if anyone is going to write a new script, the people gathered at the conference are the ones finding the pens.

They’re on strike defending decent work in Canada, Mexico, and here in the States.

They’re the ones building ties between struggles in the workplace and communities starved by thin budgets and junk jobs.

Who occupied their factories.

Who refused to say our work was done when health reform left us at the mercy of insurance companies.

Who confront their bosses about stolen wages from Chicago to Miami.

Who struggle to get their unions to stand up and fight, insistent that real power grows from members, not the lobbyists hired in D.C.

The conference wasn’t just talk. Hundreds took to a dinner-time picket line to bolster non-union restaurant workers a mile down the road, struggling to recover stolen wages and dignity. Hundreds more massed in the hotel lobby for a rally to support 100 non-union housekeepers fired last year in Boston, and then marched on the (union) hotel’s management. Their chants filled the 16-story space.

Who should be walking down the hall solo Saturday afternoon but James P. Hoffa! A Teamster did a quick double-take, not used to seeing his union president without an entourage. Turns out Hoffa’s a coin collector and was there for a coin show in another part of the hotel. The Teamster made sure to snap a picture so no one could doubt the story. Upon learning of the Labor Notes Conference, Hoffa beat a quick retreat.

In a workshop on fighting for single-payer health care, Donna Smith of the California Nurses reminded listeners that the crisis that led the Clintons to try to reform health care was that 22 million people were uninsured. How many will be uninsured following this year’s health reform bill? 22 million.

Karen Lewis, candidate for president of the Chicago Teachers Union, told the crowd at Sunday’s closing plenary, “Somehow the school buildings are magic castles, where none of the ugliness of the real world comes in. And teachers are all magicians…as long we read from a script that some rich guy somewhere, who doesn’t know anything about education, wrote. And yet, somebody else who doesn’t know anything about education is pushing a test: a test that tells us more about our children’s zip codes than it tells us about what they know.”

A workshop on “Public Employees and the Budget Squeeze” featured Ken McNamara, president of CWA Local 1037, who spoke about New Jersey public workers’ fight against furloughs. Despite intense media pressure to give in to Democratic Governor Jon Corzine, who faced a rightwing challenge in the next election, the union mobilized members to hound Corzine at appearances around the state and managed to soften the furloughs’ blow. Corzine later lost to the Republican, but McNamara says the union is now better prepared to take on a rightwing agenda, having strengthened a fighting culture where members are invested in the union—regardless of who’s in the governor’s mansion.

“But the biggest culture shock for those unionists attending their first Labor Notes conference is always its democratic character,” said Bill Onasch, a retired Kansas City bus driver and activist. “It is a far cry from the tightly scripted and deadly dull conclaves that are the hallmark of all but a handful of U.S. unions.”

The conference also tapped into an upswing in rank-and-file reform, as a surge in activism has led to takeovers in big locals in New York and California, among others.

One hallmark of the conference was the gripping stories told by international guests, who came from 16 countries.

Mexican miner Carlos Esquer from the Cananea copper mine described their strike, 999 days long on April 24. Eight active members have died because the company cut back hospital services, as have 53 retired members.

Now the company is conspiring with the federal government to dislodge the strikers.

“The day the government was supposed to evict us, we were prepared with gasoline to burn the equipment,” Esquer said. “We still are.”

The miners’ resistance—along with that of fellow miners striking and locked-out in Colombia, California, and Ontario—was honored with the conference’s Troublemaker Awards, as were the Hyatt 100, path-breaking labor educator Charley Richardson, and the United Electrical Workers sit-down strikers at Republic Windows.

Not everyone had such a dramatic story to share, but the participants stood out above all, said Al Shropshire, an Oregon pipefitter attending his first conference. Walk up to anyone, extend your hand, introduce yourself, and an insightful exchange of ideas was sure to follow, he said.

“The consensus is that we must organize our members ourselves if unions are to survive,” Shropshire said. “We can not and should not expect our union leaders to do this for us.”

The conference recharged veteran participants who were happy to see a record number of younger activists picking up the troublemaker banner.

“I brought home some much-needed energy to move my bargaining committee forward and to galvanize the troops to fight,” said first-timer Mary Havlicek, a Massachusetts nurse. “I feel like a troublemaker and I am very proud to say that!”

A couple of van loads of Philly folks drove out and back - some old timers, some first-timers. The enthusiasm generated at this conference helped some of the nurses through long nights to successfully conclude their strike at Temple Univ. Hospital. The organizers of the new independent Philadelphia Security Officers Union presented two workshops but also came back with new skills and know-how as they prepare for bargaining their first contract. Best conference in the two decades I've been going! And we'll be organizing a Troublemakers School in Philly, too. Thanks to everyone at Labor Notes - still putting the movement in the labor movement as no one else can.

Walk up to anyone, extend your hand, introduce yourself, and an insightful exchange of ideas was sure to follow, he said.

“The consensus is that we must organize our members ourselves if unions are to survive,” Shropshire said. “We can not and should not expect our union leaders to do this for us."

wow, was that the most insightful comment the staff of Labor Notes could get for the article? Um....did anyone tell poor Brother Shropshire that members have been gathering around this flash of insight for...how long have there been LAbor Notes conferences?

I bet the poor things think it's all about workers' rights.

thanks for stopping by MClayton, the door's right over there.