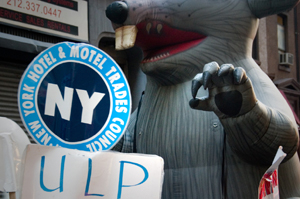 The National Labor Relations Board, crippled for years, will continue its dysfunction as political wrangling in the Senate and Obama’s failure to make recess appointments leaves three of five board seats unfilled. About 100 important cases are in limbo, including one which would determine whether unions can use their giant inflatable rat on certain picket lines. Photo: Ken Stein.

Political wrangling in the Senate continues to cripple the National Labor Relations Board, which has been operating with only two members for more than two years.

At full strength, the NLRB has five members serving staggered terms, with no more than three members from either political party.

Since December 2007, the NLRB’s only two members, Democratic chair Wilma Liebman, and Republican member Peter Schaumber, have been unable to decide any pending cases that raise fundamental policy questions.

That will continue. Senate Democrats on February 9 were unable to muster the 60 votes needed to get an up or down vote on one of President Obama’s nominees, Craig Becker, a former SEIU and current AFL-CIO lawyer.

Two Democratic senators, Ben Nelson of Nebraska and Blanche Lincoln of Arkansas, joined Republicans in opposing Becker, on the grounds that he would be too biased in favor of labor. Becker has published several articles calling for Employee Free Choice Act-type reforms, and his opponents claim he would try to implement some of those changes through NLRB decisions.

Obama’s other two nominees, Mark Pearce, a union-side lawyer and a Democrat, and Brian Hayes, a Senate Labor Committee staffer and a Republican, are less controversial, but so far the Obama strategy has been for all three nominees to be voted on together, as NLRB appointments have been handled for several decades.

Obama’s decision guarantees that well into his presidency, the many pro-employer and anti-union decisions of the Bush NLRB will remain on the books.

We’re all familiar with the expression, “justice delayed is justice denied,” and nowhere is that more true than in labor law. The NLRB’s backlog is a serious problem. At less than a hundred cases, it’s not huge. Most, however, raise major questions of national labor policy.

One case would decide whether unions and employers that enter into neutrality agreements in organizing campaigns can also agree in advance to the contract terms that would cover those workers.

A second would clarify the distinction between employees, who are covered by federal labor law, and independent contractors, who are not. A third involves the NLRB’s ability to bar retaliatory lawsuits brought by employers against unions. Yet another would determine whether unions can use their now-famous giant inflatable rat on certain picket lines.

This means that clear violations of the law go without remedy for years, for workers who were illegally fired, for unions tied up in employer challenges after winning a representation election, or for unions struggling to negotiate contracts in the face of employers’ bad-faith bargaining.

Delay almost always works to the employers’ advantage, taking the wind out of union organizing campaigns and weakening workers’ support for unions already in place.

The two-member NLRB has managed to decide more than 500 uncontroversial cases over the last two years. But even those routine decisions are in jeopardy.

When employers refuse to comply with NLRB remedies, the board must seek enforcement in federal appeals courts. Those courts are split on whether it is even legal for an NLRB with only two members to issue any decisions at all, even in easy cases where both members agree.

One court so far has refused to enforce NLRB orders on those grounds—the Court of Appeals for the D.C. Circuit. It’s the most important federal appeals court for labor, because any employer that doesn’t like an NLRB decision can usually steer an appeal to that court.

Sometime this spring the Supreme Court will decide whether a two-member NLRB has the legal authority to make rulings. If the court says no, there could be even more paralysis at the NLRB as hundreds of routine cases thought to be resolved head back to square one.

Between the recent loss of a Democratic Senate seat from Massachusetts and occasional defections from Democrats, how can Obama get his nominees seated?

Since paralysis at the NLRB generally favors employer interests, there is not much incentive for Republicans to compromise on Obama’s NLRB appointments, unless enough political pressure can be brought to bear on Republican senators from states with a strong labor presence and on waffling Democrats like those who opposed Craig Becker.

Another option is for Obama to fill the vacancies with recess appointments. During Senate recesses scheduled for early April and late May, the president could fill the seats on a temporary basis and avoid more confirmation proceedings until after the 2010 elections.

But Obama has been reluctant to use recess appointments. As his hopes for bipartisan solutions keep crashing on the rocks of a stubborn and unified Republican opposition, however, he may see no choice but to start playing hardball.

Given the sorry state of affairs at the NLRB, it’s no surprise that for years now unions have been trying to achieve their goals without relying on the board.

A version of this article appeared in Labor Notes #372, March 2010. Don't miss an issue, subscribe today.
Related
How Starbucks Workers Won in Mesa »
The Hows, Whys, and Whats of ULP Strikes »
BREAKING: Draft Legislation in New York Would Put Gig Workers into Toothless 'Unions' »
If the PRO Act Were Law, The Amazon Union Election Would Have Looked Very Different »
Viewpoint: Who Invited Them? Employers Like Amazon Should Have No Say in How Workers Organize »