A Pattern of Retreat: The Decline of Pattern Bargaining 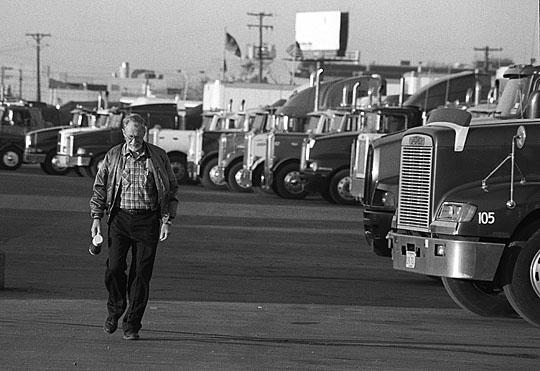 The age-old goal of unions has been to “take wages out of competition,” as an economist put it more than a hundred years ago.

By standardizing wages and benefits in an industry, unions prevent competition among workers that becomes a race to the bottom. Equally important, common wages lay a floor for future advances as we all march together.

For decades, this goal was accomplished by pattern bargaining: the union set a wage and benefit “pattern” at a company and then imposed it, through strikes if necessary, on others in the same industry (or through multi-employer master agreements).

Standards in strong patterns often spilled over to related industries, pulling up many other groups of workers.

But after a 30-year employer onslaught, national patterns have been largely devastated or have become top-down conduits for concessions.

Pattern bargaining, as the term is usually used, refers to systems of national bargaining with companies in industries producing for a national or international market.

The practice took shape in the years after World War II. In the great strike wave of 1946 the big industrial unions of the CIO all demanded a raise of 18.5 cents an hour.

For nearly three decades pattern bargaining allowed union workers to win big wage increases and a growing array of benefits. Workers in auto, steel, rubber, coal, airlines, packinghouses, trucking, oil, telecommunications—all won brand-new benefit packages, including pensions and medical insurance. For nearly two decades the wages of workers in auto, steel, rubber, and coal were within a few cents of each other.

The real wages of manufacturing workers rose by more than 30 percent from 1950 through 1969. Wages stayed ahead of inflation in most years until the 1970s.

What happened? Patterns were squeezed by international competition, the shift of manufacturing to the South, deregulation, and the spread of non-union rivals. But the breakdown also rests squarely on the shoulders of the largest industrial unions, which allowed patterns to be broken beginning in the recession of the early 1980s.

Although most activists point to the Reagan era and the infamous firing of the PATCO air traffic controllers as the start of labor’s decline, the turning point for pattern bargaining was the Chrysler bailout of 1979 and the United Auto Workers’ response: accepting $203 million in givebacks. The era of concessions was on.

Membership fell, the number of strikes dropped by almost half, new organizing stalled, and the wage gains of the past were considerably trimmed if not outright reversed. None of these indicators have returned to their pre-1979 levels.

The UAW’s pattern with the Big Three first started unraveling at Chrysler in 1979 and 1980. This was followed by concessions at Ford and GM, increasingly around working conditions as lean production was introduced. The “spillover” effect weakened substantially, dragging down wages in parts manufacturing.

The impact of deregulation was felt in the airlines, one of the country’s most highly unionized industries, where pattern bargaining collapsed in the 1980s, and in trucking. The Teamsters’ mighty National Master Freight Agreement (NMFA) covered more than 400,000 workers at its height, falling to just 50,000 today.

The Packinghouse workers, by then in the UFCW, allowed pattern-breaking deals among the major packers for the first time in 1982. The Steelworkers’ centralized bargaining with the Big 12 steel makers was abandoned by the employers in 1986. And so on.

The collapse of pattern bargaining contributed significantly to the stagnation of wages for all workers—today the average wage, adjusting for inflation, is lower than it was in 1973.

For most unions, erosion of the pattern has continued to the present day. The remainder of the Communications Workers’ pattern at AT&T fractured and downgraded last year. The UAW’s 2007 pattern agreement was even worse, putting the conveyor belt in full-speed reverse, surrendering to $14-an-hour start pay, intensified work, and 401(k)s instead of pensions.

Pattern bargaining was largely a top-down affair, focused almost entirely on national wages and benefits. So long as wages and benefits moved up, this didn’t seem to matter. But when times got tough it mattered a lot, as leaders surrendered to concessions, often without a fight.

Working conditions were left to the locals, but seldom was a framework established. One exception was the Steelworkers’ 116-day strike in 1959, as much about giving stewards a measure of shop floor power as about wages.

The Packinghouse union also had a sharp focus on production standards. “Chains,” local committees connected across a single national employer, met to discuss contract issues before and during bargaining. They brought big teams into negotiations, offering an alternative, quasi-bottom-up approach to pattern bargaining.

But for the most part, locals were left to their own devices when it came to work intensification and reorganization. Some were willing to strike, but these actions were not solidly backed by their international unions.

The whole purpose of pattern bargaining was, of course, to prevent a downward slide due to wage competition and to create a united force to push wages upward. Between 1979 and today, at different paces in different industries, pattern bargaining morphed into its opposite—a conduit for concessions and negotiated retreat.

This is most clear in auto and in the remnants of the Teamsters’ NMFA, which has facilitated concessions for some time, including a two-tier wage structure and most recently a 15 percent wage cut for YRC freight haulers.

Those unions that fought to preserve their wage patterns, in rubber, oil, steel, and among the largest railroads, did so by making deep concessions on working conditions of all kinds.

Even where wage patterns remain in place, albeit tattered by two-tier set-ups as in auto, trucking, and rubber, they survive in a sea of non-union companies and workers.

Clearly, where patterns cover only a minority of workers they can hardly “take wages out of competition,” as the low-paying non-union companies put enormous pressure on the union sector.

Are these tattered remnants even worth defending? Yes, but not as they are. They should be defended because they form a platform from which to reorganize these industries and extend union wages and benefits broadly across the economy.

The Steelworkers and Mine Workers, for example, have used their core agreements to set patterns for other companies. USW extended the economic pattern set at US Steel and ArcelorMittal to 2,500 miners at Cleveland Cliffs mining, and the UMW pushed its bituminous coal contract to other producers in 2007.

The Teamsters could strengthen the NMFA if they brought the 15,000 workers in UPS’s freight subsidiary into that agreement, rather than negotiating contracts one worksite at a time based on an inferior “template.”

Spreading pattern agreements could actually be aided by the enormous consolidation of ownership in industries such as security services, health care, steel, mining, trucking, food service, and first-tier auto parts. This makes the targets fewer and highly visible.

But today’s patterns won’t fulfill this role if they remain top-down conduits for further concessions—or if they achieve contract uniformity by locking newly organized workers into permanently lower standards. The UMW, for example, extended its pattern at the cost of giving up retiree health care for new hires.

With union consciousness already at low ebb in the working world, what appeal will young workers see in unions that calibrate standards to non-union conditions?

The base for successful pattern agreements was forged in the upheaval of the Great Depression and the wildcat strikes and mass strike wave that followed World War II.

Economic conditions are tougher now, to be sure, but so are the pressures on workers’ living standards and working conditions. As in the past, it will take a grassroots movement to turn things around.