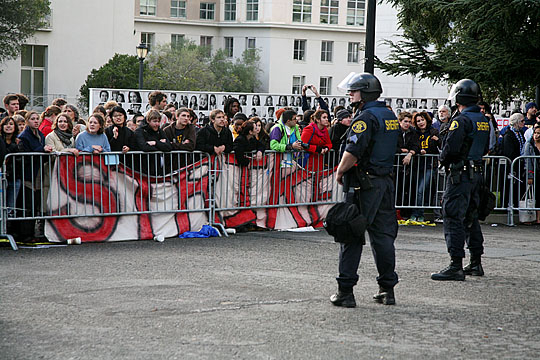 Students faced police violence while protesting the University of California’s fee hikes—enacted by an administration that is laying off workers. Union members organized strikes and pickets. Photo: David Bacon/dbacon.igc.org

No state spends more on prisons than California, while nearly every state spends more per capita on education. It wasn’t always this way. An unprecedented coalition of students and workers is responding to the attacks on affordable higher education with large-scale democratic organizing—including marches, teach-ins, strikes, and building occupations—to which police have responded fiercely.

There are no illusions about the size of the task at hand, but organizers on various campuses are linking up their organizing with an understanding that a long-term movement is needed—and has begun.

“There has never been a coalition like this on campus,” says Claudette Begin, whose clerical workers union, the Coalition of University Employees, called a two-day strike together with technical workers (UPTE) at UC Berkeley and UCLA.

At Berkeley, the seven days between the last class and the first exam is referred to as “dead week.” It made a lively comeback this December when students, workers, and community members “liberated” Wheeler Hall, a major classroom building, during a 24-7 open occupation that lasted four days.

Students reclaimed the space for meeting and study, holding lectures and teach-ins on the budget crisis, distributing literature on the fee hikes, and dancing. At the end of each night, students diligently mopped the lobby floor.

The takeover wasn’t easily accomplished. Police videotaped protesters and threatened arrests of those who peaceably remained inside on the first night. On Friday, they made good on their threats with a pre-dawn raid. Sixty-six occupiers awoke to the sound of handcuffs, and were spirited away to a jail 40 miles outside the city.

The tedium of democratic organizing has rolled on for months. Frequent two- to three-hour open meetings of the general assembly, student-worker action team, and graduate student organizing committee have drawn hundreds.

Students and workers voted for three days of action to coincide with the regents meeting in late November, where the tuition hike would be decided. Students called a three-day strike at Berkeley coinciding with the clerical and technical workers’ walkouts.

On November 20, students barricaded themselves inside the second floor of Wheeler Hall, and communicated their demands by bullhorn to thousands of supporters gathered outside: rehire laid off service workers, make the budget transparent, and reverse the fee hikes.

UPTE members set up pickets to protest what they call the university’s “illegal bargaining tactics,” and called a rally.

UC called in several police departments, which were unable to break barricades for several hours as students held the doors and called, unsuccessfully, for negotiations. “They kept yelling through the doors, ‘prepare for the beat-down,’” said UC grad student Zach Levenson.

Police eventually arrested 40, but faculty and students negotiated their release. The cuffs came off and the students emerged after dusk before a cheering crowd.

Throughout the day, students linked arms in tussles with cops, while others sat down in the street to block police trucks entering campus.

Service workers with AFSCME Local 3299 have supported student organizing against fee hikes. They blocked a back entrance to the building, one of several actions aimed at reversing layoffs—44 have lost their jobs at Berkeley. “How do you have a 32 percent fee hike and then cut services on campus?” asked President Lakesha Harrison.

The nonviolent actions were returned with force—police shot one student with a rubber bullet, and another had her finger smashed by a police club, requiring reconstructive surgery.

Students at UC Davis and Santa Cruz also led several occupations during the week of the regents meeting, which was held at UCLA. The administrators were greeted in Los Angeles by thousands of protesters. Students and campus workers established a tent city outside the meeting—which took place behind a police line. As at Berkeley, UPTE workers walked out.

Eric Gardner, a member of the Coalition of University Employees, spent the day running between an assembly outside the regents meeting and another that formed outside Campbell Hall, where dozens of students had locked themselves in. “After they voted for the tuition hikes, the anger was palpable,” he says. “People more or less spontaneously blocked the regents from leaving.”

For three hours, activists sat down in front of a garage where a van full of fee-hikers was trying to escape. The police attacked with pepper spray.

Though their demands were not met, Gardner says the culture has already changed. “Campus has been quiet for years,” he said. “We did this to show we can take over this place.”

The California State University system of 23 schools relies more heavily on state funding than does the UC system, which draws only about 20 percent of its budget from the state. Summertime budget cuts turned into department cuts, teacher layoffs, and fee hikes at CSU.

Undergrad Ryan Sturges, an organizer with Student Unity & Power, says the hikes (he paid $300 more this semester) are helping construct a multi-million-dollar recreation center aimed at attracting a wealthier “clientele.”

Sturges and 300 students marched into the administration building in late November as part of an open occupation. Two weeks later, 20 students locked down the SFSU business building for a day. Police broke through student pickets outside and, with guns drawn, arrested them.

The statewide resistance has brought questions of class, race, and privilege to the fore as the new fees will make public education unreachable for many residents.

Huge public events don’t mean that the movement has been a huge success, however. Protests have left some students alienated and many on the sidelines. The fees hikes remain, as do the UC regents, an undemocratic, appointed body with little concern for the workers and students most affected.

Despite President Yudof’s claims that financial aid will rise, there won’t be enough to offset hikes, which will disproportionately affect working class students and students of color. Already, only 3.5 percent of students at Berkeley are African American.

But setbacks are a crucial part of movement building. They lay the groundwork for organizing that can really work, even while the list of demands grows and the clock ticks.

Organizers are crafting a different list of priorities for the school. “We don’t want to just return to the way the university was in, say, 2007,” says Berkeley’s Levenson.

The list includes lower pay for the highest-salaried administrators, re-emphasize outreach to communities of color, halt construction projects funded by fee hikes, make school governance structures more democratic, and “de-privatize” as Levenson says. With 80 percent of UC funding not generated by the state, he says, the university is at the whim of private funders.

The fight against privatization of a public good—education—isn’t happening only in California. It is tied to a series of strikes, rallies, walkouts, and occupations taking place in schools across the U.S. and in Austria, Germany, and Greece. The highs and lows are shared in solidarity with a much larger movement.

Meanwhile, organizers are casting a wider net, fomenting an ambitious March 4 student and worker strike throughout the state’s education system that will bring together K-12 and higher education activists.

Kate Maich is a graduate student in sociology at Berkeley.