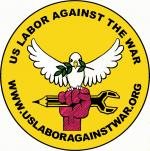 According to US Labor Against the War, the money spent in Iraq and Afghanistan could have paid for a year’s worth of health care for 140 million people—almost every working person in the U.S. The wars have cost each U.S. family $12,750 so far.

U.S. Labor Against the War is preparing for its third national assembly in December as the original motivation for its founding—the Iraq war—is winding down to a more limited but permanent presence.
No worries that the nearly seven-year-old USLAW coalition has outlived its usefulness, though: delegates to the Chicago meeting will debate the Afghanistan war.

Thus far few unions have taken positions on the increasingly unpopular U.S. presence there, even those that have historically been leaders within labor on questions of war and peace.

An example is SEIU1199, United Healthcare Workers East, which in 2003 sent 25 busloads of members to Washington to try to forestall the invasion of Iraq. Vice President Steve Kramer says war has not been on 1199’s front burner recently. “We’re not focused on world issues to the extent we’d like to be,” Kramer said, citing concessions demands, a slew of contract reopeners, and the health care reform fight.

Besides preoccupation with day-to-day survival, some union leaders may be hesitant to criticize the U.S. presence in Afghanistan for other reasons. Kathy Black of AFSCME District Council 47 in Philadelphia says, “Nobody knows squat about Afghanistan, which is why USLAW has slide shows and fact sheets.”
Black, a USLAW co-convenor, sees a change in attitude since President Obama was elected.

“It’s been really simple as long as Bush was president to get a lot of these unions to oppose the obscene level of spending in Iraq,” Black said. “But anything that will smack of opposing Obama’s policies or saying he’s not withdrawing from Iraq fast enough—they have other fish to fry.”

Kramer noted also the general lack of anti-war protests in the country.

Black sees a “hesitancy to do anything to discredit the administration” during the fight to get health care and labor law reform.

“If we get sold out on those things,” she says, “it’ll be easier to get people to sign on [to an anti-war position].”

DEBATE IT AT HOME

USLAW leaders have sent out sample union resolutions in advance of the December meeting, asking affiliates to raise and debate the question in their own meetings.

One such resolution, from a big New York Teachers (AFT) local, United University Professions, says, “The $65 billion to be spent in Afghanistan this year, and the hundreds of billions of dollars required in coming years for counterinsurgency there, are desperately needed for urgent domestic social purposes.”

A USLAW slide show is chock full of eye-opening statistics that affiliates are encouraged to share with members: The money spent in Iraq and Afghanistan could have paid for a year’s worth of health care for 140 million people—almost every working person in the U.S. The wars have cost each U.S. family $12,750 so far.

John Braxton is co-president of the wall-to-wall Faculty and Staff Federation at the Community College of Philadelphia, AFT Local 2026, an affiliate of USLAW. He says that when some members opposed the local’s taking a stand against the impending Iraq war in late 2002, leaders took a membership poll. They found 60 percent supported the local’s position.

Afghanistan is trickier, Braxton believes. USLAW was formed after many official union bodies had begun to oppose the war, he notes, and was created to pull those unions together and expand their reach within labor.

But now, Braxton says, most locals don’t have any position at all. “We won’t be a very effective organization if it’s just the activists saying we’re against this war,” he said.

Given the enormous cost of war and the huge cutbacks this year in government spending on education, health care, and other public goods, it’s natural that some unions are educating members and the public on the trade-offs.

SEIU Healthcare Pennsylvania, for example, trains staffers on how to engage members on the “guns or butter” question, stressing that this is a union issue and shouldn’t be shied away from.

In July, when Pennsylvania failed to pass a state budget on time, some SEIU Healthcare members faced payless paydays. The union focused its protests on the impact of budget cuts on state-run veterans nursing homes, where nurses are SEIU members. The union said the cuts would close 400 beds and that the vet homes had already turned down 40 vets who needed a bed.

A day of action featured press conferences at five nursing homes, along with vets’ organizations. The legislature reversed the cuts.

HEARING FROM A VET

Last year, the local’s annual convention featured a march and rally at a VA clinic and talks by a member, a Pittsburgh nurse, and her son who had come back from Iraq with physical and psychological problems.

“His story touched a nerve with our members—the idea that we’re spending the kinds of resources we are on dubious military operations in Iraq,” Bisno said, “yet we can’t provide basic access to affordable health care for adults and children in the U.S., even those we’re sending abroad.”

Mike Zweig of United University Professions, which represents faculty and professional staff at the State University of New York, says his delegate assembly passed an anti-Afghan war resolution this month by a big majority.

The SUNY system just made a mid-year budget cut of $90 million, Zweig said, and “people are just disgusted with this war, they want the money. Nobody said a word about ‘let’s cool it till after we get health care reform.’”

“We can’t escape the reality of the money situation,” Black says. “As long as we are pouring money into overseas military operations we can’t possibly have full economic recovery. We have an opening to talk about war spending and the black hole of Afghanistan.”

[The USLAW website includes a narrated 19-minute slide show, “Understanding the Price of U.S. Global Power,” that shows the costs of war.]

[A second free slide show, “Why Are We in Afghanistan?,” by Mike Zweig with illustrations by labor cartoonist Mike Konopacki, will be available after its debut at the December 4-6 USLAW Assembly in Chicago.]