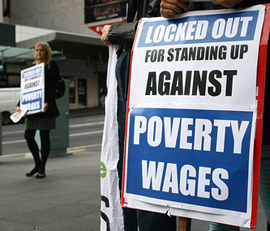 New Zealand’s newest union, Unite, has captivated a workforce ignored by most unions around the world: young service-sector workers. The union responded to this April lockout at a call center with a blockade and flying squads at the center's major clients. Photo: Resistance Photography.

New Zealand’s newest union has captivated a workforce ignored by most unions around the world: young service-sector workers, many of them people of color in fast-food jobs.

The Unite union’s barnstorming approach has organized thousands of them, led strikes at McDonald’s and Starbucks, won significant raises for fast-food workers, and helped spearhead a successful effort by New Zealand’s unions to boost the national minimum wage.

In the past year and a half Unite has grown by 3,000 to reach 8,000 members. Beyond fast food, other members in the five-year-old union work in call centers, hotels, a casino, and the postal service.

Unite has an easier time organizing than U.S. unions, even though union membership in New Zealand has plummeted to one-fifth of the population, down from its peak of 69 percent in 1980. Labor law permits access to worksites by union organizers, and staff and volunteers visit worksites and patiently convince workers to sign membership cards. And unions achieve recognition, and some legal protection, with as few as two members in a worksite.

Thousands of young workers have gained union representation for the first time with the union, many of them from the marginalized Maori indigenous and Pacific island populations.

“We had several things working in our favor when we started the organizing campaign,” said Mike Treen, Unite’s national director, at the campaign’s outset in 2007. “The unemployment rate was low, so it gave young workers confidence that if things came to worse, they could always move on to another job.”

But the union quickly realized that it could not win by traditional tactics of industrial action.

“Our campaign was above all political,” Treen said. “We used a combination of on-the-job pressure tactics and mobilization of community support to win union representation.”

The union called on the companies to “Supersize My Pay,” riffing on the food chains’ own sales pitches. The union purchased a bus, decorated it, attached loudspeakers, and traveled from one worksite to the next, making organizing and bargaining campaigns very public.

Crucial to the union’s success has been the appeal of its three key principles—a higher minimum wage, abolition of cheap labor “youth rates,” and guaranteed minimum hours of work—and its militancy.

Dozens of campaigns concluded in short strikes, including the world’s first at the Starbucks coffee chain in 2005 and at McDonald’s outlets in 2006, which raised pay above minimum wage and won better job security, hours of work, and a signing bonus.

Another part of Unite’s success may be explained by its commitment to live like its members. The union’s national office in Auckland is spacious, bright, and strictly functional—no expensive furniture here.

Staffers are paid salaries about equal to those of its members, and no one earns higher than $11.80 per hour ($20 NZ). They say that’s tough to maintain when other unions can pay considerably higher, and it can be hard to draw staff members from the ranks of the union when their jobs can pay better than union work.

Unite’s campaigns look beyond its members to all workers in the country. From the start, it fought for a $6.84 ($12 NZ) per hour national minimum wage and an end to the hated youth wage rates, 80 percent of the adult rate.

The union fought against the youth rate, abolishing it this year at all its locations, including McDonald’s, KFC, Pizza Hut, Burger King, and the major movie theater chains. At McDonald’s, 1,100 employees are now unionized.

But perhaps most promising for New Zealand union activists has been Unite’s spillover effect. Other unions are emulating its tactics, transforming themselves into more activist and representative unions as a result. Among them is the National Distribution Union, which recently scored a breakthrough at the country’s retail giant The Warehouse, New Zealand’s answer to Wal-Mart, signing up 2,000 new members.

Union consolidation is on the horizon in New Zealand, too. Unite has considered merging with the NDU, which shares its outspoken antiwar stance. The two unions are also part of a coalition defending the rights of the country’s hundreds of thousands of temporary migrant workers.

The union is also occupied by challenges spun out by the global economic crisis, most recently at a call center in south Auckland. The British-owned Synovate company locked out 30 workers during first-contract talks in early April. The next day, union members and supporters blockaded the entrance to the center. Unite announced flying squads for the following week to picket major companies in Auckland and Wellington that are clients of Synovate, soon earning workers a contract.

The union is preparing a campaign to win an $8.55 ($15 NZ)-an-hour minimum wage, a step toward an eventual goal of a minimum wage set at two-thirds of the average wage. Unite will soon launch a national referendum vote on the matter.

“In the 1990s unemployment hit 12 percent and real wages declined by 25 percent,” Treen said. “Wages have never recovered. We think that workers will respond very positively to a campaign seeking to retake some of that lost ground.”

Roger Annis is a union activist in Vancouver, Canada, and member of the Machinists union. He can be reached at

. Find out more about Unite at www.unite.org.nz.