Under Shadow of Corruption Scandals, SEIU Launches Hearings Against Dissidents 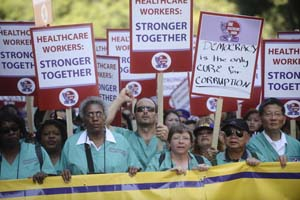 It’s crunch time for the November election, but top officials in the Service Employees International Union (SEIU) are struggling to focus as corruption scandals and internal divisions over a threatened trusteeship spread across the union.

Since mid-August four International Executive Board members have left their posts in the wake of reports detailing corruption and cronyism.

At the same time, the International is escalating its internal battle with United Healthcare Workers-West (UHW), the 150,000-member local that has been an outspoken critic of SEIU’s national leaders. The International announced hearings for late September to examine whether to take over UHW, and sent representatives to monitor the Oakland-based local’s operations.

This move stems from allegations that UHW’s officers improperly handled union funds by creating a nonprofit organization to “finance a defense of the top officers in the event of a trusteeship.” The monitoring program and September 26 and 27 hearings are “a purely political move to silence our members,” countered UHW President Sal Rosselli.

NOW’S NOT THE TIME

The rush to trustee UHW has ignited concern in many quarters of SEIU, particularly with the presidential election so close at hand. On September 12 the executive council of the giant 1199-United Healthcare Workers-East overwhelmingly adopted a resolution encouraging the International to postpone any deliberations until after the November election. Leaders from several other locals have contacted International President Andy Stern urging him to delay any action against UHW.

Despite these misgivings, the International denied UHW’s request for postponement, and sources at the International report that plans are underway to impose a trusteeship. Such a move could require dispatching several hundred SEIU staff to California. SEIU’s trusteeship officer could take weeks to announce a recommendation.

According to Rosselli, the specter of trusteeship will impact UHW’s plans for the fall election. “We have a team of folks in New Mexico right now, and we are waiting for approval from the International to send more people to New Mexico and Nevada,” he said. “But our plan in California will be curtailed because of this escalating battle against us.”

SEIU spokeswoman Michelle Ringuette denied that a trusteeship is in the works, or that the September hearings will affect the union’s political efforts.

CLEANING UP OR PAYBACK?

The UHW trusteeship hearings are unfolding as a corruption scandal spreads within SEIU. A series of August reports in the Los Angeles Times document a pattern of financial improprieties by several Stern-appointed political leaders (see box). The allegations have led to leaves-of-absence for Local 6434 President Tyrone Freeman, his former chief of staff Rickman Jackson, and Annelle Grajeda, president of Los Angeles-based Local 721 and head of the union’s state council. Freeman has been suspended without pay and is facing charges, while Local 6434 is under voluntary trusteeship. The union is investigating Jackson and Grajeda—both on paid leave—as is the Department of Labor. Amanda Figueroa, secretary-treasurer of Local 6434 and a member of the International Executive Board, also took temporary leave from her union positions.

Several local unions have expressed concern that any action now against United Healthcare Workers-West could hurt SEIU’s efforts in the November presidential election.

The allegations against UHW stem from the creation of a nonprofit organization in April 2007, part of the union’s efforts to promote health care reform in California. The International alleges the nonprofit was designed to “convert union dues into a private source of outside funds to maintain their power.”

UHW transferred $3 million from the union’s treasury to the nonprofit account, but spent only $100,000. As trusteeship rumors swirled earlier this year, the UHW executive board dissolved the nonprofit and returned the remaining money to the union.

Ringuette acknowledged that UHW leaders did not design the nonprofit for personal enrichment.

“The International is trying to smear UHW when in fact it’s Stern’s allies who are guilty of corruption,” Rosselli said.

Ringuette would not comment on recently leaked email communication between senior International staff and officers discussing options for “UHW work.” A June 5 email likened a UHW trusteeship to the invasion of Iraq: “easy to get in and then a slog.”

UHW officials seized on the leaked documents as evidence that the trusteeship is retaliation for their opposition to Stern’s attempts to centralize power.

The union signaled in July that the single long-term care local would be headed by the leaders of now-trusteed Local 6434. Ringuette said that a statewide health care workers union would be a new local, with leadership appointed by the International.

“This will mean the dissolution of UHW,” Rosselli said. “Even if they don’t succeed in imposing a trusteeship they are planning on eliminating the union.”

At a UHW leadership conference in early September, 2,300 delegates unanimously voted to “use all available means” to fight attempts to divide their local or replace their elected leaders with appointees. International monitors got a preview on September 3, when 75 rank-and-file bargaining team members drove them out of a bargaining session between UHW and Catholic Healthcare West.

Speaking to the leadership conference afterwards, George Wong, a pharmacy technician at Kaiser–San Francisco, promised much more if the International moved on UHW.

“When the day comes and they try to dissolve the executive board, they will have to drag us out of there,” he said. “We are not going to go quietly into the night.”

Related
Mexican Auto Workers to Choose New Union in Landmark Vote »
Auto Workers Win Direct Democracy in Referendum »
Why (and How) Michigan Nurses Rebuffed a Raid on Our Union »
Academic Workers Join Push for One Member, One Vote in the UAW »
Whose Safety? Our Safety! »

Union members at SEIU HealthcareMichigan are finally relieved from the the stranglehold that Rickman Jackson had on the membership and staff. Finally, Rickman Jackson was exposed and taken out of elected union office in Michigan.

You say "when the day comes and they try to dissolce the EB...", who is "they"? The EB follows the directorate of the members and if you are committing fraud their are means to remove you. All monies online for all members to see.

Cigar Club, Hawaiian expenses? This sounds as bad as the tyrants we are up against. Probable a CoIntelPro branch or worse, another variant of the Mohawk Valley Formulae.
Lawson
Jersey