Are Industrial Unions Better than Craft? Not Always. 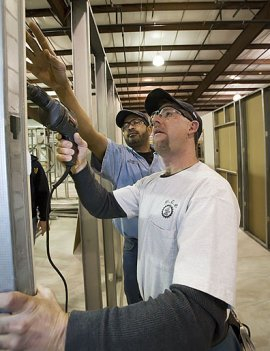 Looking carefully at the craft versus industrial question, we find that no one form is best suited to dealing with all the issues facing workers. Photos: Jim West

Looking carefully at the craft versus industrial question, we find that no one form is best suited to dealing with all the issues facing workers. Photos: Jim West

Which is better—craft unions or industrial unions? The debate is as old as the labor movement itself, and one that resists simple answers.

Craft unions organize workers along occupational lines. Industrial unions join everyone who works for one employer, or one industry, into one union.

The argument surfaces in the dispute between the Service Employees and the California Nurses Association. SEIU asserts that the only way to take on the giant hospital firms is to have everyone organized together in one union. CNA says only a union of, by, and for nurses can give the proper focus to the needs of nurses.

Similarly, when the Teamsters and the Aircraft Mechanics Fraternal Association battled recently at United Airlines, the Teamsters charged that AMFA was a craft union interested only in mechanics and not cleaners or baggage handlers.

In cases of competition, like these, other factors trump the craft versus industrial debate. Which union is more democratic, which has bargained better contracts, which has more potential power? Those are and should be the factors workers use when deciding between two unions.

Still, looking carefully at the craft versus industrial question, we find that no one form is best suited to dealing with all the issues facing workers.

No one disagrees that in the 1930s, industrial unionism represented a qualitative step forward for workers. The CIO shoved aside the hidebound craft unions of the AFL to organize the mass production industries that were central to the economy and thus to workers’ power.

Then and now, industrial organization stresses the common interests of workers. It can partially overcome the racial and gender divisions that are reinforced by job classifications and hiring discrimination.

In addition, the larger size of industrial unions and their density in some communities makes mass political action easier, compared to the lobbying, special-interest politics that fit with narrow craft interests.

Yet craft unionism was not swept away by industrial unionism. When the CIO was organizing millions, the AFL grew by even larger numbers.

There were many reasons why craft unions carried on and continue today. In the 1930s, their conservative policies made them less of a threat to employers than the industrial unions, which were demanding sweeping political change.

In addition, craft unions have used control over apprenticeships and other procedures to erect barriers to new workers entering the craft. The resulting shortage of workers naturally pushes up wages and gives the union greater leverage. This entry control means that crafts are riddled with networks of extended families and systems of mutual obligation.

Control over training also gives the union power over both the content of jobs and who can do them.

These sources of leverage are two-edged swords. Training, family connections, and cultural homogeneity helped when the unions needed to resist attacks from the Pinkertons and other management spies.

But, more important, these same qualities were also barriers to Black workers and even to various white ethnic groups as well as to women. Craft unions, protecting “their own,” have often opposed social change and social movements.

Control over job content is another two-edged sword: it has often made unions resistant to absorbing new technologies. Such technologies then become the employers’ weapon to smash a once powerful union. Typesetting is an example.

CALLED TO THE WORK

The craft approach persists, however, because for these workers it more directly addresses the work experience. Central to the craft union are the specifics of the work, pride in the job, and a sense of professionalism.

In an auto plant, for example, most production workers think of their jobs as nothing more than a way to make decent money. Many skilled tradespeople, though, think of their job as a profession and take pride in their skills. Many people become nurses, teachers, mechanics, electricians, organizers, or actors because they feel a calling to that work.

Not only are the “professional” issues central to these workers, their knowledge and skill give them tools in the battle to control the workplace. Craft unions lend themselves more naturally to on-the-job organization. Industrial unions that ignore these issues may see members leave to form their own craft unions, as Emergency Medical System workers and electrical technicians in SEIU did in the Bay Area.

At the same time, focus on craft issues can become a diversion or obstacle in periods of rapidly expanding class consciousness and sweeping social movements that capture the imagination and drive change in the labor movement as well as in the society at large.

This is not to say that industrial unionism solves any of these problems automatically. An industrial union, too, may fight only for its own members rather than for workers as a whole.

The United Auto Workers (UAW), for example, fought for decades against fuel-economy standards in order to defend the Big Three’s gas-guzzlers. On the other hand, the nurses-only CNA fights for single-payer health care.

Both the craft and industrial models address important parts of our work experience. Any union movement that wants to win power for workers needs to address both.

Likewise, craft unions can form councils to deal with a common employer. A bargaining council at a university, for example, could bring together separate unions for professors, teaching assistants, lab techs, clerical workers, and maintenance.

Central labor councils in theory represent the common class interests of all the workers in an area.

But it turns out that these solutions don’t work as well as they should. Anti-labor laws make it hard to take solidarity action across union lines. It could be an unfair labor practice, for example, for a union to refuse to settle its own contract because other unions bargaining with the same employer have unresolved issues.

More important, cross-union bodies, relying primarily on voluntary participation, are notoriously weak and underfunded. They usually restrict themselves to the least common denominator—activities that don’t antagonize any of the constituents. Rarely does a bargaining or geographic council take on the racial or gender biases that tend to be reinforced in craft unionism.

While industrial unions more readily solve some of these problems, they also pose different ones. As Detroit labor historian Steve Babson points out, industrial unions pose special problems in hierarchically organized workplaces where some workers have a degree of authority over the work process.

Nurses typically provide direction for nursing assistants. RNs themselves often take assignment from one of their own—a “charge nurse.” In almost any kind of workplace these days, some workers are “team leaders.”

Such power relations can influence work assignments and scheduling. Being at the top of a work hierarchy can reinforce arrogance and a sense of power, and if these workers also dominate within the workers’ “industrial” union, the problem is magnified. Those at the bottom may feel they need their own union to protect them.

What is needed is unions that pay attention to life on the job and the advancement of craft skills as well as to common issues and common mobilization against the employer—indeed, to the issues common to all workers.

Organizational forms are not magic. There is no single form that protects against self-serving bureaucracy nor that guarantees solidarity. These stances come only from struggle, education, vision, and the continuous development of new leaders.

If I disagree with Lloyd, its that, while certainly all workers are deserving of unions, the intrinsic strength (due to legal jurisdiction, amount of schooling, and nature of the work) of RNs cannot be found, ever, amongst groups whose licenses and workloads are severely restricted such as CNAs and others are. And certainly the wage difference will never (and in my mind, considering the differences, shouldn't) be covered fully between CNAs and RNs, even if hospitals were to be organized on an industrial model.

The appeal of craft unions, especially in the nurse setting, is that they speak to exclusively craft purposes and goals. CalNurses focus on RN-Patient ratios, for instance, would never fly with an industrial model; it, after all, promotes the use of RNs over less qualified staff. I see industrial organizing, without respect to the very real differences between work groups, leading to a situation where lower paying jobs are actually promoted, and deskilling encouraged, inside hospitals.

Not to be too crass, because I've got a lot of friends who are nurses who work hard in a tough environment, but this article misses the main problem with craft unions: they organize the most skilled workers and leave the most vulnerable workers out to dry.

Does having the California Nurses Association or another nurse craft union at a hospital make it more or less likely that the service and certified staff will get a union or be paid more? I'm ready to be wowed by CNA boosters ready to show how nurse contracts benefit janitors and Nurse Aides, but I don't think it'll hold water. Nurses have hard jobs where they work long stressful hours but so do nurse aides. The difference is that nationally, the mean hourly wage for RNs in a hospital is $30.64, while for a nurse aide it's just $12.09 - who needs a union more?

Unions have more success organizing RNs (which is exactly why the CNA and SEIU both want them) because the RNs have the power in a hospital. While Mr. Parker lets the CNA off the hook by saying they use that power to fight for single payer health care, I'd be more impressed if they used that power to help SEIU or another union organize the rest of the workers in the industry AND fight for single payer.

And lets not just get hung up on Labor Notes crush on the CNA. Craft unions are bad for the construction industry too. By not even attempting a full scale organizing drive on the national construction companies, the building trades let the residential housing boom with its tens of thousands of jobs get built non-union. Residential construction is almost exclusively non union and national companies exist, that if organized could have move unions into the south and southwest. Because the trades only had to worry about getting their members jobs that were getting public financing and spent their time and political energy enforcing prevailing wage laws, the labor movement lost that opportunity. Imagine what 30,000 or more construction union members in Georgia, New Mexico and North Carolina who just got fired because of the housing bust and are about to lose their union sponsored health insurance could have done for advancing single payer.

Medical unions are especially prone to organizational problems due to the nature of medical profession licensing and the work itself. The reality is that a CNA, an LPN, an RN, and a APN are on vastly different skill levels. Add in other professionals like physical therapists, psychologists, social works, and of course, doctors themselves, and you have a byzantine command structure that spiders out floor by floor. Even amongst those specific licensees theres a hierarchy of command, with individuals in charge of specific wards and then a layer of supervisors who are essentially executives who are in charge of everyone in a specific class.