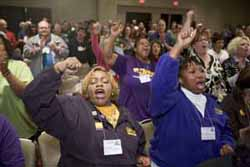 More than 1,000 union activists and supporters met at the Labor Notes conference April 11-13 to strategize and debate how to rebuild the labor movement's power.

Media attention has been given to the attempted disruption of the conference by several hundred staffers and members of the Service Employees International Union (SEIU)—some of whom became violent when conference participants refused to allow the chanting protesters to enter the hotel’s banquet hall (See full story).

The fact is, however, that the business of the conference went on as planned. With the exception of a handful of earlier workshops in which speakers were shouted down by SEIU staffers, participants gathered in 110 meetings with members of their own unions and across unions, learned nuts-and-bolts tactics, debated grand strategies, networked, agreed, disagreed, and inspired each other.

The conference was dedicated to Santiago Rafael Cruz, an organizer for the Farm Labor Organizing Committee in Mexico, who was murdered by employer-paid thugs.

Perhaps surprising, given the weakened state of the labor movement, is the fact that this was the largest Labor Notes conference since 1997, with more than 1,000 registrants. Although discussions were sober, participants still found inspiration in encountering so many others who were, as one session was titled, "troublemaking for the long haul."

Labor Notes is a monthly magazine and education project that since 1979 has been a center for communication and inspiration for rank-and-file union members and labor activists.

Labor Notes publishes the only national independent cross-union monthly. Subscribe to Labor Notes for $40 for two years (24 issues) by going to www.labornotes.org/subscribe.

Related
Teamster Insurgents Plan for a Win—And What Comes After »
Countdown to a Strike Tonight at John Deere »
The Real-Life Auto Strike Behind the Runaway Netflix Hit Squid Game »
Interview: A Mexican Auto Worker on the Fight for a Real Union at GM's Silao Plant »
John Deere Workers Overwhelmingly Reject Contract, Could Strike Wednesday Night »