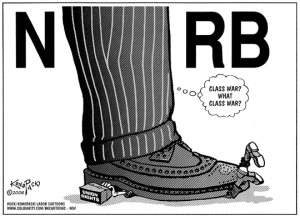 The National Labor Relations Board (NLRB) rewrote in September a 40-year-old doctrine that will undermine one of labor’s more successful organizing tactics—card-check recognition. Card check allows workers to gain union recognition by a simple majority show of authorization cards.

This tactic is usually spelled out in a “neutrality” agreement in which an employer agrees not to attack the union while it recruits the majority necessary to gain recognition. Card check, neutrality, and other forms of voluntary recognition have been considered legitimate since the National Labor Relations Act was validated by the Supreme Court in 1937.

The September ruling, known as Dana/Metaldyne—the name is drawn from the two auto-parts plants involved—concerns a pair of factories where the United Auto Workers gained recognition through card check in 2003. In both cases, the UAW had contracts at other units with the companies and had negotiated a neutrality and card-check agreement. Also in both cases, anti-union employees filed a decertification petition within weeks of recognition.

While not outright banning card check or neutrality agreements, the NLRB may have undermined their effectiveness. As soon as a majority gains recognition by a show of cards, the board decided anti-union employees can file for decertification if 30 percent of workers petition for it.

At Dana a minority of 35 percent of employees called for a decertification election within weeks of the union’s recognition.

THE RISE OF CARD CHECK

An effective tactic, card check has been on the rise since the mid-1990s. The AFL-CIO says that between 1998 and 2003, 80 percent of the three million workers who joined unions were recruited outside the NLRB procedures.

In 2005, the last year of a united AFL-CIO, the federation said 150,000 workers joined unions through card check or expedited elections conducted under a neutrality agreement. This included 4,700 janitors who joined the Service Employees (SEIU) in Houston in 2005. Since then, the Communications Workers (CWA) has recruited 19,000 employees at AT&T Mobility (formerly Cingular) by card check.

The industries in which it was used most frequently by the late 1990s were hospitality, casinos, telecommunications, and auto. In 2004, UNITE, HERE, and the UAW all reported that a majority of new members came through card check.

Indeed, studies say most neutrality agreements are in companies where the union has a prior bargaining relationship, as at AT&T, Dana, and Metaldyne, or in areas with a high union density in the target industry, such as casinos and hotels in Las Vegas.

One of the weaknesses of neutrality and card-check agreements is that most of them depend on the cooperation of the employer. While some employers, typically those with existing bargaining relationships, favor card check, most do not. The vast majority with no union presence do everything possible to keep it that way.

The U.S. Chamber of Commerce has launched a campaign against card check, while the Republicans are backing a bill in Congress to outlaw the practice. The unions, on the other hand, are pushing for the Employee Free Choice Act, which would specifically underwrite card check. While it has considerable Democratic support in both houses of Congress, it is unlikely to pass in the near future, because backers need 60 votes in the Senate to defeat the Republicans’ blocking maneuvers.

Card check and neutrality are not panaceas for the revitalization of unions if only because most employers oppose them. In those cases where unions win, as the SEIU did in Houston, it usually takes a prolonged and costly campaign of external pressure.

Another problem is that neutrality agreements do not only limit the actions and statements of the employers, but in three-quarters of such agreements the actions of the union are also limited. Most commonly this means a gag on “denigrating or disparaging the employer,” as one UNITE attorney described it. Some agreements ban picketing or strikes during the campaign.

One of the arguments made by this same lawyer is that neutrality agreements “curtail the industrial strife common to organizing drives.” In some cases this is taken further, to a form of partnership or even the sort of “value-added unionism” advocated by SEIU’s President Andy Stern, in which the union promises to improve company performance in return for what amounts to voluntary recognition. In other words, such agreements can edge toward a sweetheart deal.

Because most employers are not about to grant card check and/or neutrality, those unions that do the most organizing still use the NLRB. SEIU, which targets the units it pursues carefully in line with its three major sectors (health care, building service, and public service) has a very high rate of success—72 percent.

The Machinists come second among private unions with a 66 percent win rate from 1999 to 2004. The Teamsters, at the other extreme, pursue hundreds of NLRB elections each year in a wide variety of industries and occupations, with a win rate of 40-45 percent.

Nevertheless, the turn to card check and neutrality agreements is a consequence of the undermining of the NLRB procedures over the last 30 or more years.

An indicator of the employers’ willingness to break the law has been the rise of Unfair Labor Practices associated with NLRB elections. According the NLRB Annual Reports, the ratio of ULPs to representation elections rose from 2-to-3 in the mid-1950s to almost 9-to-1 in 2006.

Another indicator of illegal employer resistance is the number of ULP cases in which union activists fired during a campaign win back pay. Even though the number of representation elections has slumped over the years, the number of back pay awards has risen dramatically.

The trend continues to grow. The past four years saw an annual average of 2,500 elections and 28,000 back pay awards.

The Dana/Metaldyne decision is just one of 61 rulings pushed through by the Bush-appointed board in September, almost all of which are anti-union. For example, St. George’s Warehouse shifts the burden of proof from employers to fired workers in back pay cases.

As Mineworkers President Cecil Roberts said at a rally protesting these NLRB decisions, “This is Bush’s board. This is the Chamber of Commerce’s board…This sure as hell ain’t the labor board.”

Labor’s response, while angry, has been largely symbolic so far. Hopes are pinned on the 2008 elections and the passage of the Employee Free Choice Act in 2009—a long time to wait for a long shot.

Related
How Starbucks Workers Won in Mesa »
If the PRO Act Were Law, The Amazon Union Election Would Have Looked Very Different »
Viewpoint: Who Invited Them? Employers Like Amazon Should Have No Say in How Workers Organize »
Goodbye and Good Riddance: Biden Fires Labor Board’s Peter Robb »
Trump’s Anti-Worker Labor Board »