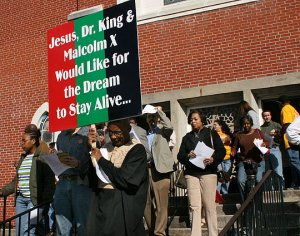 Hundreds of meatpackers, who are trying to organize a union at Smithfield Foods’ hog processing plant in Tar Heel, North Carolina, took January 15 off to attend a Martin Luther King Jr. Day rally. The company has refused to give workers the holiday. Photo: UFCW.

Update: 21 immigrant meatpackers were arrested by Immigration and Customs Enforcement (ICE) officers January 24 at the Smithfield Foods plant in Tar Heel, North Carolina. ICE spokespeople told the Associated Press that workers were arrested on “administrative immigration charges,” but United Food and Commercial Workers (UFCW) organizer Eduardo Peña, who’s been organizing at the plant for more than four years, believes the ICE raid was an act of retaliation. To learn more about the Smithfield workers’ struggle, go to Justice at Smithfield.

Hundreds of meatpackers from the Smithfield Foods hog processing plant in Tar Heel, North Carolina honored Martin Luther King Jr. Day at a January 15 rally in nearby Fayetteville, where they lambasted the company for its refusal to give workers the holiday off.

Smithfield’s 5,000 Tar Heel workers, the majority of whom are Black and Latino, have been trying to organize into the United Food and Commercial Workers (UFCW) since the early 1990s. The company has responded with, in the words of one federal court ruling, “intense and widespread coercion”: retaliatory firings, intimidation, and beatings by plant security.

According to UFCW organizer Eduardo Peña, support for Smithfield workers at the Fayetteville rally was “overwhelming.” Some 700 people attended the rally, where community and religious leaders attacked Smithfield for its treatment of the Tar Heel workers, while many workers made the connection between their struggle and Dr. King’s legacy.

“He died for the workers,” Smithfield worker Johnnie Davis told the Associated Press, referring to King’s involvement with a Memphis sanitation workers strike at the time of his assassination. “He died for us.”

In early January, 4,000 workers at the Tar Heel plant signed a petition requesting a paid holiday on Martin Luther King Jr. Day, which is recognized as a state holiday in North Carolina. When they presented the petition to Smithfield Vice President Larry Johnson on January 9, he refused to accept it.

According to Smithfield worker Keith Ludlum, the company explained its refusal in part by noting that workers were recently allowed to vote on whether they could have a paid holiday for Martin Luther King Day or Easter. The workers chose Easter, but Ludlum said that the vote left a bad taste in his mouth.

“What we’re telling the company,” said Ludlum, “is they’re asking us to choose between Jesus and Martin Luther King. We think they’re both important and we should honor both of them.”

Ludlum said that Tar Heel workers were “extremely upset” that Smithfield refused to even consider the petition. According to Ludlum, “It got a lot of workers saying they’re not going to show up for work, or that they’ll show up, get the line started, get some hogs killed and hanging, and then walk out.”

Campaigning around Martin Luther King Day allowed UFCW organizers to tackle one of their biggest obstacles: the divide between Tar Heel’s Black and Latino workers. Last spring, when immigrants rallied across the country demanding fair immigration reform, many of Smithfield’s Latino workers walked off the job in solidarity, while most Black workers remained at work.

Ludlum explained that the vote to choose between Easter and Martin Luther King Day reflected, and exploited, those divisions: “A majority of the workers at the plant were Latino and immigrant, they didn’t know the history of Martin Luther King, but of course they know what Easter is.”

To bridge the Black/Latino divide, Smithfield workers organized an educational campaign during the lead-up to Martin Luther King Day. Said Ludlum, “We’ve been passing out flyers in Spanish explaining the history of Dr. King, the fact that he fought for all people, that when he took the bullet he was supporting sanitation workers in Memphis who wanted to be treated with respect.”

According to Eduardo Peña, who’s been organizing in Tar Heel for more than four years, the educational work paid off. Said Peña: “We’ve got Latino workers here ready to walk out for the holiday. I hear them saying things like, ‘People assume that we don’t know who King was—his struggle was the same struggle we’re going through now.’”

As buzz about the Martin Luther King Day walkout spread, Smithfield announced January 11 that workers who took the holiday off could be fired. “Some of the workers were intimidated,” said Peña. “The company publicly threatened them—in the media, with a press release.”

Peña said management also pressured workers individually to come to work on the holiday. Said Peña, “They targeted senior workers, people who already had points against them, told them, ‘If you go out, you’ll most likely lose your job.’”

According to Peña, Smithfield also went after recent hires, telling them flatly, ‘If you walk out, you’re fired.’

The threat of retaliation had convinced many workers who signed the original petition to show up for work on the holiday. Despite that, the union estimates that between 400-500 workers didn’t work on Martin Luther King Day, with many of them heading to Fayetteville for the rally.

In the plant, the walkout had a serious impact. According to Peña, first-shift production was dramatically reduced, while some managers had to work until midnight to meet production goals.

Said Peña, “In this type of facility, just a few workers missing has a big impact. If you’re working one of those specialized jobs and you don’t show up, everything slows down. In some departments, dozens of people were missing [on the holiday] and the lines were moving very, very slow.”

When workers returned to the plant, they found the company had backed down from its threats of disciplinary action. Management posted an announcement saying that there would be no retaliation against workers who walked out.

Said Peña, “Workers that ended up working [on the holiday] are very angry…we told them, ‘If we stick together, the company doesn’t have the ability to discipline us.’”

Peña said that by backing down from its threats, Smithfield has also given the union more credibility. “The company is making it easier for us to do our work,” he explained. “We’re telling workers, ‘See, the company only responds to action. We can’t win by negotiating, we win by walking out, by taking action.’ And it’s working.”

Beyond affecting production, Peña said that the workplace education around Martin Luther King Day could have a lasting impact. “You don’t build African-American/Latino unity by doing a flyer or coming up with a catchy phrase,” he said. “You do it by educating workers and letting them decide what they’re going to do.”

Peña believes that the walkout, and the Smithfield plant’s legacy of militant action, is laying the foundation for a strong union in Tar Heel.

“This local union will be established with a history of struggle,” said Peña. “When the bargaining committee sits down with the company, there won’t be any question in the company’s mind of whether the union will be militant—they’ve already seen walkouts, demonstrations.

Peña concluded: “Nothing’s been easy here. There won’t be any secret ballot election to win the union. It’s a question of whether the workers want to fight for it or not. That’s why the company is so afraid. That’s what’s going to make it so sweet.”