This handout illustrates how the union builds power. Print out, fold it up the way these shop stewards did, and use it when you talk with your co-workers. Photo: SEIU Local 205. 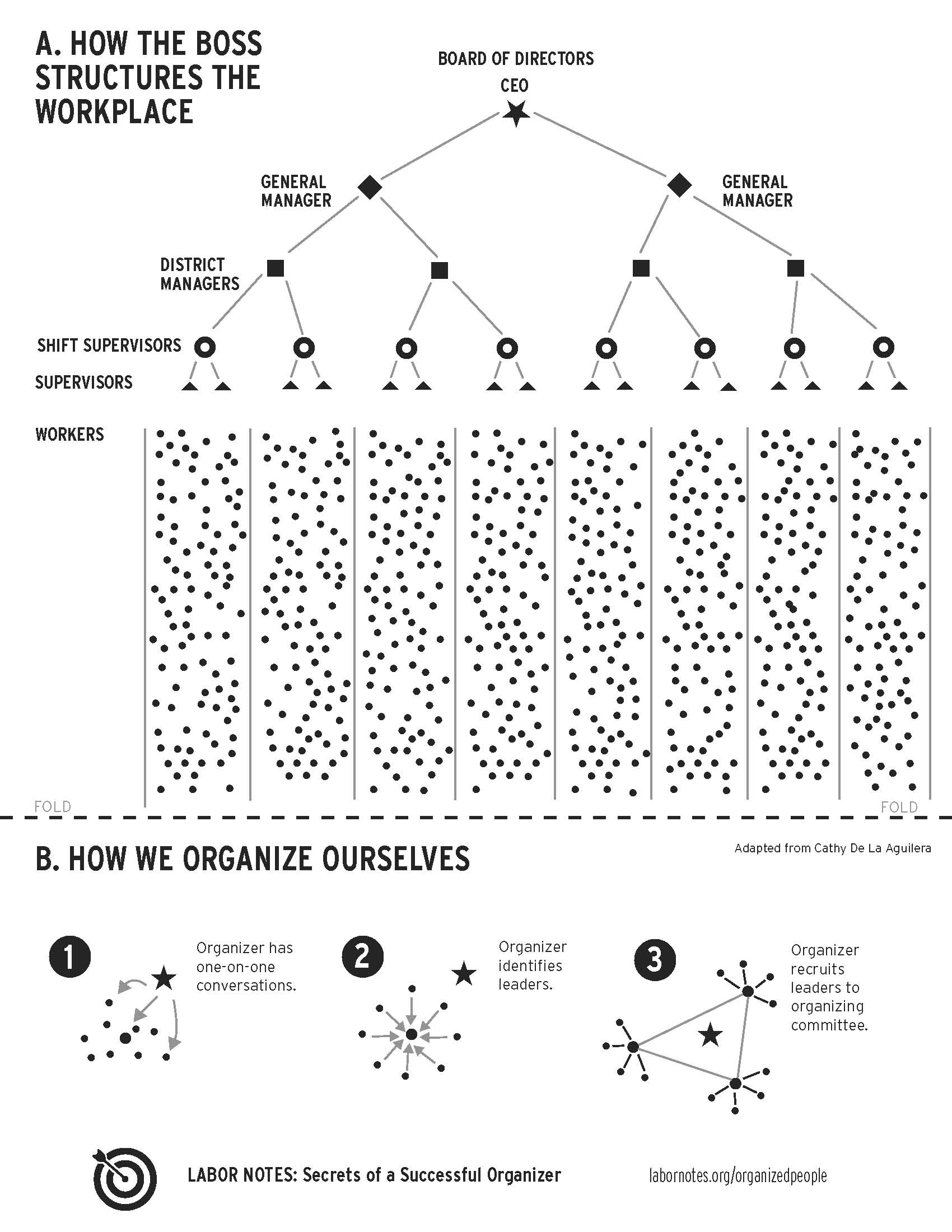 This page is designed to be printed out (double-sided), folded up, and tucked in your pocket. Use it when you’re talking with co-workers about how the union works. Click here to download it now.

Are you looking for a simple tool to help your co-workers understand what the union is all about? Click on the handout at right to enlarge it. It's designed to be printed out (double-sided), folded up, and tucked in your pocket to use when you’re talking with co-workers.

We use this handout in our trainings. It’s called “Organized People Have Power,” and it’s adapted from a diagram by organizer Cathy De La Aguilera. When the sheet is laid flat, you see an unorganized workforce. Fold up the bottom third of the page, and you’ll see how a worker committee redraws that picture, building an organization that can rival the power of management.

In Labor Notes workshops we often ask, “How many people here feel like they’re part of a small number of activists who are doing the majority of the work in their union?” Nearly every hand in the room goes up. Even scarier, if we polled our bosses, many would see our unions the same way.

The activists who attend our workshops and raise their hands often form the inner core of their unions—the center of the bullseye that we use in all our trainings and even put on the cover of our book Secrets of a Successful Organizer.

To win, organizers need to move many more co-workers into action, filling out the rings of the bullseye. That’s why our trainings focus on the skills you need to make that happen: effective one-on-one conversations, mapping and charting a workplace, recognizing a good organizing issue when you see it, recruiting the right leaders, and turning workplace issues into campaigns that shift the balance of power.

TOOLS YOU CAN USE

Back in January, Labor Notes made some New Year’s resolutions: to provide more organizing resources, train more rank-and-file organizers, and create more opportunities for sharing and collaboration across unions in 2017. Four months later, we’re well on our way.

Would you like to host a workshop at your local? How are you using our book, handouts, or online course? What organizing tips or ideas can you share with us? Email training[at]labornotes[dot]org.

A version of this article appeared in Labor Notes #457, April 257. Don't miss an issue, subscribe today.
Related
Review: Don’t Bleed in the Shark Pool »
Viewpoint: Confronting the Nature of Work »
Every Boss Has a Weak Spot. Find and Use It. »
Viewpoint: The NLRB is Underfunded and Understaffed—And That’s a Big Threat to the Current Organizing Wave »
Review: On the Line: A Story of Class, Solidarity, and Two Women’s Epic Fight to Build a Union »