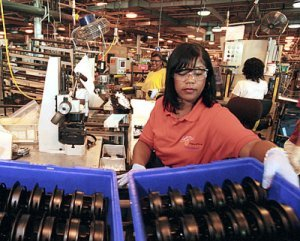 A worker at the Delphi plant in Flint, Michigan. Photo: Jim West

In the right hands rules can be powerful tools. Just-in-time inventory—which demands that no more stock be available on site than is immediately required for production—makes the production system exceedingly vulnerable to “work-to-rule” strategies.

In Surrendering the Shop Floor, Charley Richardson suggests the union should be notified in advance of every change in the work process. The United Auto Workers has had this contract stipulation with the Big Three auto makers for years, yet this has done little to prevent job loss or to exert control over the day-to-day production process.

The problem isn’t that we lack contract language. The problem is the UAW has emasculated shop floor militants with cooperation programs and official representation. Leaving shop floor power struggles in the hands of UAW office rats is like expecting a secretary to record the minutes with a ball peen hammer and a socket set. We need to stop fiddling with language and start splitting knuckles.

By definition, high-tech machinery and lean production standards put more power in the hands of each individual worker. Every worker in a lean system has more responsibility and hence more leverage. High-tech machines and “First Time Quality” standards require more training and experience than the old-fashioned drill press routine. In lean manufacturing, first-time quality is urgent. The standard can be wielded like a hammer to drive home the point of worker power on the shop floor.

Auto parts suppliers—like Delphi, where I work—don’t have repair yards. They have no tolerance for lag time, under the demands of just-in-time delivery. Tight schedules exert enormous pressure.

If a machine is producing substandard products, it must be fixed promptly. An interruption at any link in the production process not only hinders the supplier, it obstructs the auto assembly plant and ultimately every one of its suppliers. In the past, suppliers maintained stockpiles to offset downtime, but now stockpiles are obsolete. Stockpiles are considered waste by lean, just-in-time standards.

Like most manufacturing facilities, we have a shop rule against producing scrap in our plant. I notify my supervisor right away if my machine produces any scrap. If he demands that I continue running, I request that he put the order in writing so I will not be fired. Then he or she is responsible.

You see, we can use management’s rules as tools against them in job fights. And as singer-songwriter Ani DiFranco once said, “Every tool is a weapon if you hold it right.”

For example, in an effort to show how committed corporate managers are to quality, GM devised contract language that has, in the right hands, proved to be a valuable tool. It’s called “Document 40.” It states in part, “It is acknowledged that it is ultimately management’s responsibility to establish and assure product and service quality requirements.” It sounds harmless enough, but here’s how it works in the right hands:

I’m a production worker. I detect a quality problem. I notify my supervisor. If nothing is done and the problem persists, I call out my committeeperson (steward) and together we discuss the issue with the supervisor and document the discussion.

If the issue remains unresolved, it goes up the ladder, just like a grievance. Ultimately, it could go all the way to the top of the corporation. No manager in their right mind would let that happen. That’s the promise of “Document 40.”

Most times, the quality issues we encounter in the auto parts industry are inconsistent. That is, a percentage of the parts produced are substandard. The supervisor may justify allowing some scrap to be produced in order to meet just-in-time delivery.

The problem is, parts suppliers are expected to deliver perfection. Any defect can be costly if it is not detected before it reaches the customer. One out of 100,000 is an unacceptable level of defects. The supplier is required to reimburse GM for time lost on the assembly line due to defective products. GM demands perfection from suppliers. Who do you think really controls quality? Management?

Recently a new supervisor tried to exert authority. I pulled a “Doc Forty” on him. He quickly learned that he doesn’t have the power to fix anything. All he has is the contractual responsibility. The real power to fix things is in the hands of machine operators, job setters, electricians, tool makers, etc. Without us, he’s all alone on the teeter-totter. The arrogant supervisor was forced to recognize and respect our authority on the shop floor.

Lean manufacturing and just-in-time delivery make “work-to-rule” strategies more effective than strikes. But union bureaucrats don’t know how to utilize the tactics. They are too out of touch with the shop floor.

I think most company negotiators, in most industries, would be willing to sign on to a “Doc Forty” type agreement. How could they justify a refusal to hold management accountable for quality? Besides, the managers wouldn’t fear the language. They always insist that “management has the right to manage.”

The effectiveness of working to rule derives from the manipulation of rules into tools, and tools into weapons. Of all the tools in my box, “Doc Forty” is the most powerful persuader.