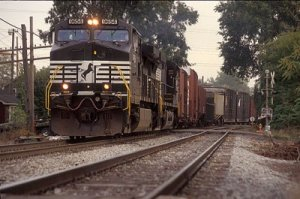 With a technology known as “positive train separation,” it may soon be possible to begin limited operation of some trains with no operator whatsoever. Photo: Jim West

Like many other industries, railroads have undergone dramatic restructuring over the past few decades. Advances in radio, telecommunications, computers, and other forms of technology have decimated the ranks of the nation’s railroaders, from brakemen and switchmen to clerks and car inspectors.

For train and engine crews, perhaps the biggest threat comes from Remote Control Operation (RCO) in the rail yard and from single-person operation of over-the-road trains. In fact, with a technology known as “positive train separation,” it may soon be possible to begin limited operation of some trains with no operator whatsoever.

RCO was implemented on a broad scale on most of the nation’s major railroads in 2002 (see Labor Notes, May 2003). Once in place, RCO eliminates the need for an employee at the controls of the locomotive, thus reducing crew size (and saving the employers money in wages and benefits).

The employees on the ground, who couple and uncouple the rail cars, join the air hoses, and perform a host of other tasks, are now able to operate the locomotive by manipulating the buttons and switches on their “belt-pack” devices.

A myriad of other technologies now conspire to make single-employee operation of over-the-road trains a possibility. First attempted—and then backed away from—by the union-busting Wisconsin Central in the 1990s, the practice has been waiting on the back burner. Various states, including Wisconsin, have adopted two-person crew laws in a union-sponsored effort to protect their membership and provide a safe work environment.

No single technology is responsible for the shift towards single-person crews. Centralized Traffic Control, whereby a train dispatcher has control over the entire piece of railroad (including remote control track signals and switches), eliminated the need for a head brakeman and rear flagman in many cases.

Automatic trackside detectors contributed greatly to the demise of the caboose, and made train inspection by an on-board crew stationed at the end of the train no longer mandatory. Advances in radio have allowed the dispatcher to speak directly to the train crew through base stations, so that s/he can communicate immediately with the crew regardless of the train’s location.

Taken together, these and other technologies have reduced the responsibilities of the train crew.

The national freight carriers appear poised to attempt to force the rail unions to accept the elimination of the road conductor. They are pushing for trains run with a single-person crew, a “transportation employee” who will not only run and take charge of the engine but will also assume the conductor’s duties (see page 3).

Rather than call signals to each other across the cab, the lone employee will call them over the radio. Rather than have the conductor handle necessary switches in front of the train, the employee would now dismount from the locomotive and throw them, or have an all-purpose “utility employee” tend to the switches.

The lone employee would no doubt also be expected to handle all of the paperwork for the train, keeping track of waybills, orders, hazardous material information, and more during his/her tour-of-duty.

Rail workers have suffered under years of union infighting, since they are represented by an array of different organizations. The application of new technologies, such as RCO, has often exacerbated this division, as members of one craft scramble to protect their own at the expense of their brothers and sisters in a different craft.

The Brotherhood of Locomotive Engineers (now part of the Teamsters) has historically represented the vast majority of the nation’s engineers. The United Transportation Union has represented the trainmen.

But rather than unite and fight on the RCO issue, the two unions are at each other’s throats. Why? Because with the looming threat of this new technology, jobs were going to be lost in droves.

Would these job losses be engineer jobs or would they be conductor jobs? Rather than collectively resist technology changes, neither union trusted the other.

The rail carriers have skillfully managed to undermine the natural solidarity of train-and-engine employees, whose work environment provides for an extremely close relationship. The carriers have been able to divide-and-conquer the workforce by exploiting a powerful combination of new technologies and outdated craft unionism.

Currently, there exists no official workplace strategy to combat RCO. The Teamsters have been conducting an ongoing campaign, with some success, to lobby local and county governments to outlaw RCO as an unsafe technology.

There are rumors among train crews that railworkers around the country are informally working to rule with the new RCO technology. Over the last 18 months, many rail terminals around the country have become congested and backed up, contributing to big delays on the mainline.

As for a fightback on the question of single-person operation of road trains, neither union’s leadership has discussed the subject. Now that the carriers apparently plan to open that can of worms and push for reduced crews aboard road trains, the unions will be forced to articulate a position. What kind of fight they mount, how effective it will be, and with what degree of inter-union solidarity, remains to be seen.

Ron Kaminkow is an engineer in BLET District 27.