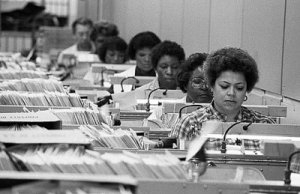 Workers used letter sorting machines at the Detroit post office in the 1980s. Newer technology puts workers farther away from each other. Photo: Jim West

In 1969 the rock band Zager and Evans sang, “In the year 5555, Your arms hanging limp at your side. Your legs got nothing to do. Some machine doing that for you.” In almost every industry, automation and technology have “de-skilled” workers—bringing some reality to these 35-year-old lyrics.

Postal workers are not immune. As more automation comes in, more postal workers go out. Sitting or standing in a case sorting mail alongside a co-worker is rare today. Now workers are electronically tethered to some kind of machine.

First, a machine called an LSM (letter sorting machine) upped productivity by virtue of the fact that it can sort one letter per second per console. A typical LSM had 12 consoles, each sorting about 3,000 pieces of mail per hour.

Often clerks were grouped as teams of three, sitting stationary to “key” three digits of a zip code for 40 minutes, within talking distance of three or four people. For 20 minutes, each clerk would pull mail from the back of the machine alongside one or two other people. The first team’s non-keying person loaded mail onto the machines for keying. There was always somebody close by to converse with.

This time has been greatly diminished by the newest mode of technology, the Delivery Barcode Sorter. This machine sorts 40,000 pieces of mail per hour, with two people staffing it. They don’t work in close proximity as in the past, and mail must be cleared from the sorting bins at a faster rate. If a machine isn’t running, a supervisor head-locked into a computer will be on the worker right away.

This equipment usually takes up a lot of space in the facility, so workers are around a smaller group of co-workers. They are usually kept so busy there isn’t time to do anything but keep the machines running. Breaks are staggered so workers don’t get as much quality group time.

This equipment is downsizing the workforce; there are fewer employees and fewer union members. Human interaction has been minimized.

Management also pits workers against each other. Certain machine crews get good, fast-running mail, resulting in good numbers, while another crew gets mail that is more difficult to run, and their numbers will be less. This tactic tends to create problems on the work room floor.

If one shift of people is designated to run the heavier mail every day, or one person is assigned to a machine working the bulkier mail even two days in a row, strain on the body is greater. Old machines caused repetitive motion injuries, most often in the wrists; new automation affects a larger number of body parts—hands, elbows, shoulders, back, neck, hips, and feet.

Unions are mostly unable to dictate management’s internal mail processing policies, unless they violate the contract—who gets what mail is generally not a contract violation. Sometimes an individual may be able to show disparate treatment on machine assignment. Considering the concern for ergonomics now, there may be an opportunity for unions to appeal such treatment on the basis of injury prevention.

More union officials and stewards, if not working their daily job—tethered to a machine—are processing and investigating individual and class action grievances, usually in a room off the work room floor. Again, productivity is of utmost importance to management, so grievances are not tended to immediately, which causes a backlog of problems.

In the old days, when the union steward went around and collected union dues, it was one of the most effective means of building solidarity, giving the union a presence and the power that came with that presence.

Today, management frowns on “talks” by the union with employees, thus inhibiting a good-faith relationship. Even union officers who are full-time must work in daily meetings, arbitrations, and phone calls, and be on all three tours (24 hours) seven days a week, often at numerous locations.

As much gloom and doom as the Zager and Evans song may paint, as we watch technology change daily in the U.S. Postal Service, unions can’t sit back and just accept it. The floor dues collection days are gone, but that doesn’t mean that the union’s presence on the floor has to go with them.

Lance Coles is president of the Des Moines, Iowa local of the American Postal Workers Union.