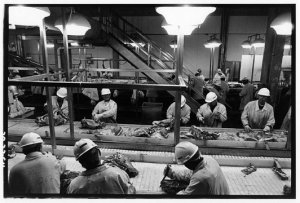 A majority of the workers are Guatemalan at the Excel beef packing plant in Schuyler, Nebraska. Immigration officials say they have tripled workplace raids in the last year. Photo: David Bacon

Update: 21 immigrant meatpackers were arrested by Immigration and Customs Enforcement (ICE) officers January 24 at the Smithfield Foods plant in Tar Heel, North Carolina. ICE spokespeople told the Associated Press that workers were arrested on “administrative immigration charges,” but United Food and Commercial Workers (UFCW) organizer Eduardo Peña, who’s been organizing at the plant for more than four years, believes the ICE raid was an act of retaliation. On January 15, Martin Luther King Day, hundreds of Tar Heel workers—including many immigrants—refused to come to work, protesting Smithfield’s refusal to give them Martin Luther King Day as a paid holiday. To learn more about the Smithfield workers’ struggle, see the articles from our August 2006 and February 2007 issues. To learn about how you can support the Smithfield campaign, go to Justice at Smithfield

Heavily-armed federal agents stormed six Swift meatpacking plants last month and rounded up nearly 1,300 immigrant workers in one of the largest workplace raids in U.S. history. The raids represented the climax of a year in which Immigration and Customs Enforcement (ICE) ratcheted up its workplace operations.

As recently as June 2005, the federal government’s General Accounting Office testified that ICE was making worksite enforcement a low priority after shifting internal resources to border control and anti-terrorist programs in the wake of September 11. So why the sudden crackdown?

While the recent political furor over immigration undoubtedly sparked the wave of raids in 2006, immigrant workers’ increased willingness to challenge abysmal conditions in the meatpacking industry fanned the flames. Employers have become increasingly anxious as fed-up immigrants’ walkouts and other self-organized activity have re-ignited hopes by unions of winning back lost parts of the industry.

Despite the lack of offshore competition and the real--or perceived--economic crisis faced by other U.S. industries (such as auto, airlines, and steel), meatpacking companies in this once-union heavy industry have been steadily attempting to drive down workers’ power and profits up since the early 1960s. This decline has transformed meatpacking jobs while a massive influx of mostly Latino immigrants has transformed the workforce.

Unlike many industries, notably auto manufacturing, meatpacking has not grown dramatically leaner over the past few decades. Labor historian Roger Horowitz explained: “Improvements in productivity due to mechanization in the industry are very limited. The big problem for firms in meatpacking is that it still takes lots of people standing shoulder to shoulder wielding knives to process animals. Since they can't increase productivity through machines, they can only do so by keeping wages low and making workers go as fast as they can.”

Since meatpacking companies couldn’t get leaner, they got a lot meaner—forcing a free fall in real wages and benefits, and speeding up the killing floor to dangerous levels. Real wages dropped for meatpacking workers from $20 per hour in 1977 down to $10.50 in 2001, while on the shop floor workers now face one of the highest accident and injury rates in the country: over 25 percent.

The restructuring drive began with the closings of older, unionized, urban plants in the Midwest and Northeast. As these plants closed the work became more and more concentrated in newer, non-union plants in rural areas. The meatpacking companies themselves helped nudge this trend with recruitment programs targeting recent immigrants.

Following this shift, millions of immigrants came to these same rural areas in the 1980s and 1990s in search of farm work. Many immigrants drifted into the new meatpacking plants as native-born workers were driven out by worsening conditions.

"The 1980s marked a turning point in the character of work in the meatpacking industry, from a blue collar, middle class job to employment of last resort,” said Horowitz. “Union jobs that once allowed packinghouse workers to achieve a good standard of living became poverty level occupations. Real wages fell 30 percent in the 1980s. Workers fled the industry to find better jobs; in their place entered workers with limited job options, especially recent immigrants."

Undocumented workers currently may constitute more than 25 percent of the total workforce in the industry according to a 2005 Pew Hispanic Center report.

The United Food and Commercial Workers (UFCW), born of the 1979 merger between the Retail Clerks and the Amalgamated Meat Cutters unions, was unable to mount an effective response to the downward restructuring spiral in meatpacking.

The 1979 merger put leaders of the retail division into the top offices of the new union. “The old line was the UFCW stood for ‘U F-cking Clerks Won’,” said retired UFCW local president Bill Pearson. “Essentially, the historically more militant attitude of the meat cutters was watered down.”

The new UFCW officials let the old packinghouse unions’ strategy of aggressive national bargaining, packing committees, and workers chains (company-wide committees made up of local leaders and rank and filers) erode. Instead, the UFCW gave companies concession after concession on compensation and working conditions in an effort to appease aggressive employers eager to throw out the old pattern agreements. Well-publicized defeats such as the Hormel strike of 1985-1986 only added more fuel to the fire.

The UFCW also failed to organize the new plants and the industry’s increasingly immigrant workforce. Consequently, union density in meatpacking fell through the floor, dropping from 40 percent in the 1970s to a little over 16 percent in 2003.

Since the late 1990s, however, immigrant workers in the industry have at times been more willing than union officials to fight for better conditions in the plants.

Teamster meatpackers threw three wildcat strikes at plants from 1999-2001, despite the lack of backing from union officials. In September 2001, over 700 mainly Latino immigrant members of Teamsters Local 577 walked out of their Amarillo, Texas plant to protest safety and health problems, understaffing, abusive treatment, and poor representation by local union officers.

After organizing a wildcat strike against Iowa Beef in 1999, reform-minded Latino meatpackers in Pasco, Washington took over the leadership of Teamsters Local 556 from incumbents who had refused to fight plant management.

In Ft. Morgan, Colorado, (close to the site of one of the largest of the Swift raids in Greeley) Latino-led rank-and-file meatpackers in IBT Local 961 also held wildcat walkouts in February 2001.

More recently, immigrant meatpackers staged wide-scale walkouts in support of immigrant rights rallies last Spring. Industry sources reported that over half the butchering operations in the United States came to a halt during the May 1, 2006 immigrant rights rallies. Tyson, one of the world’s largest meatpacking companies, admitted that six of its nine beef-processing plants and four of its six pork-processing plants were shutdown on that day.

Although workers organized much of this activity without direct union support, some unions seem to be catching on. The UFCW has worked with and defended immigrant workers throughout its recent large-scale meatpacking organizing campaigns in Tar Heel and Omaha, Nebraska.

When meatpacking giant Smithfield Foods fired dozens of immigrant workers at its Tar Heel, North Carolina plant in November 2006 over no-match letters, several hundred workers walked off the job in multiple shifts. Hundreds of workers at the plant had previously walked out in support of immigrant rights rallies in May. UFCW organizers built national solidarity efforts around both walkouts.

The union condemned the Swift raids and filed for a federal injunction in an attempt to stop further ICE raids. UFCW locals have also helped organize protests against the raids and in support of affected workers’ families. ICE agents were called into a Denver court January 12 to answer allegations of abusive treatment and due process violations filed by UFCW Local 7, which represents 260 detained Swift workers in Greeley.

“Local union officers are feeling the heat over supporting members who have been accused of having false documents,” said UFCW Local 789 President Don Seaquist about his Minnesota local’s efforts to build bridges between immigrant and native-born workers. “We must move our own members while fighting a larger social, legal, and political battle over immigration reform.”

“The challenge before the labor and immigrants’ rights movements is to find common ground, develop a mutual respect for the role of each, and maintain open communication and dialogue,” stated California immigrant rights leader Nativo Lopez. “The importance of strengthening relations [between the two groups] is not solely for the purpose of pursuing federal immigration reform…Immigrants will not progress socially without joining the labor movement and obtaining a collective bargaining agreement. If this applies universally to all workers, it most certainly applies to the immigrant worker.”