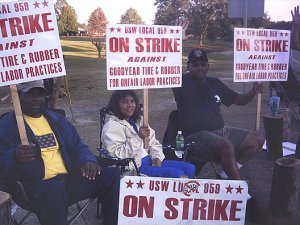 More than 15,000 members of the Steelworkers (USW) at 16 Goodyear Tire and Rubber plants in the United States and Canada went on strike October 5, rejecting a proposed contract that would have closed two plants and imposed steep concessions. Goodyear’s proposal reportedly included a 50-percent wage cut for new hires, the creation of a four-tier wage system, and health care and pension cuts.

“We’ve drawn a line in the sand,” said Dave Prentice, benefits representative and political coordinator for USW Local 2 in Akron, Ohio. “When the top officers [at Goodyear] share $38 million in bonuses at the expense of the people who generated the profit, that may be legal, but it’s immoral.”

Immediately after the strike was announced, hundreds of workers began picketing outside of Goodyear’s Akron, Ohio headquarters and at plants around the country. Eight of the 12 struck plants in the U.S. make tires, while the other four make hoses, belts, and other rubber products.

Goodyear is also preparing for a war of attrition, having borrowed nearly $1 billion in cash to get it through the strike. According to Ranick, “they got that money now because if this strike lasts for a while their creditors are less likely to give them a loan. They know we’re ready to stay out for a while.”

Although the company has claimed it’s maintained operations with minimal disruption since the strike began, Ranick said, “The fact is there’s not enough people in the plants. They’re trying to run things with supervisors. They’re getting no real production.”

Business analysts estimate that the strike is costing Goodyear anywhere from $14 million to $43 million a week in lost production.

“If I were [Dale Earnhardt] Junior, I wouldn’t want to be driving 200 miles per hour on a straightaway not feeling confident about my tires.”

“They’re hanging tough,” Fulmore said of the strikers, “they know they’re in it for the long haul. They were real glad to see us out there with them.”

Dee Rucker-Ash, a Goodyear worker and benefits representative for Steelworkers Local 959 in Fayetteville, said that spirits remain high for the 2,000 union workers from her plant. On October 21 the local union hosted a prayer vigil. “A lot of people showed up,” said Rucker-Ash. “There was a real feeling of fellowship.”

Pete George, a founding member of USW Local 831 in Danville, Virginia and now a retired Teamster, has been joining Danville strikers on the line. George said that of 2,200 Goodyear workers in Danville, only one had crossed the picket line.

“They’re not going to give in,” he said of the strikers. “Goodyear’s trying to say they need these cuts because of foreign competition. Everybody knows that’s baloney.”

Fulmore, who’s been bringing her two-year-old daughter to the pickets, said that the mood around Fayetteville is supportive of the strikers. “The pickets are right by the highway,” she explained. “People driving by are giving us the thumbs up, honking their horns—especially the truckers.”

Ranick said the public is behind the strike because the Goodyear conflict “goes beyond union versus management. People see the constant loss of good-paying manufacturing jobs. People in communities see the negative impact when a plant closes.”

Prentice agreed, noting that in Akron, “any of these closures not only hurt our members, they cause great harm to the local community.”

In Danville, said Pete George, strikers know how high the stakes are. “These are some huge cuts Goodyear’s asking for. A fifty percent pay cut? Management just wants to see how far they can push, and now they’re finding out.”