Pensions: The Next Casualty of Wall Street 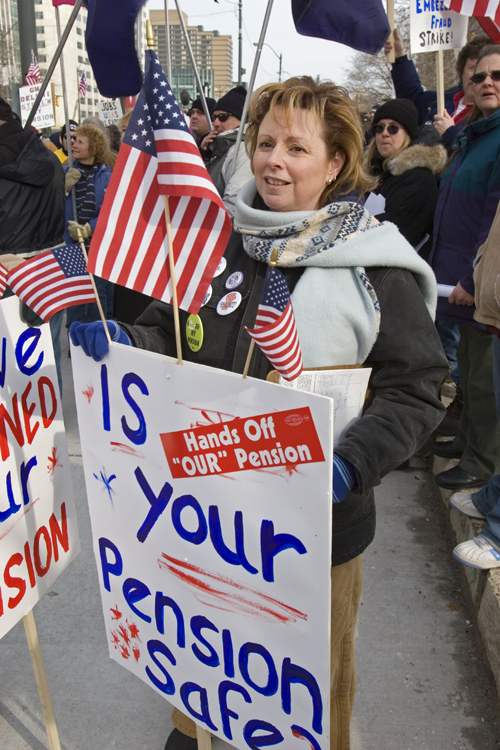 Nobody wants to admit it, but the next casualty of the Wall Street meltdown will probably be your golden years. For years corporations have been trying to choke the life out of traditional pensions, working hard to get out from under the risk--and the cost--of providing for their retirees.

Nobody wants to admit it, but the next casualty of the Wall Street meltdown will probably be your golden years. For years corporations have been trying to choke the life out of traditional pensions, working hard to get out from under the risk—and the cost—of providing for their retirees. Between last year’s credit crunch and changes to federal pension laws, they may get their wish.

Nearly $4 trillion worth of retirement savings were wiped out in the first weeks of the 2008 financial freefall. Half of the drop was concentrated in traditional pension plans, also known as defined-benefit plans. While most workers in these plans haven’t had their monthly benefits cut, unlike the 46 million people riding the stock market with 401(k) defined-contribution plans, the storm clouds are gathering.

Labor needs a strategy to protect what we’ve won. But holding our ground requires moving from defense to offense. If the pension crisis is going to be solved for union members, it has to be solved for everyone.

Driving the decline were employers looking to get off cheap, eliminating pensions entirely when they could get away with it, and when they couldn’t, shifting to 401(k)s. These programs were legalized in 1978 and were originally designed to supplement traditional pensions. Now they’re choking them out like kudzu.

Corporations got a great deal, paying about half what they used to towards their workers’ retirement by the ’90s. Even more important—as anyone who has opened their 401(k) statement recently can attest—the move shifted risk off companies and onto us.

Traditional pensions were a collective solution to a collective problem. Young and old contributing together smoothed out insecurity for all. Now it’s just you and the stock market—with far less in your pocket.

Even before the crash, studies showed that 401(k)s leave workers with 10 to 33 percent of what traditional pensions provide. Given the 30-year squeeze on wages, most people haven’t saved much either, which explains why more than half of all 401(k) participants have less than $75,000 when they retire.

Even for those with superior defined-benefit plans, the last 20 years have been rocky. Companies spent much of the 1990s gaming the system, siphoning off pension funds to pad the bottom line.

At the start of this year the nation’s defined-benefit pension plans had only about 75 percent of what they owed participants. Companies may need to contribute as much as $100 billion to cover these gaps.

Although Congress waived compliance with new pension rules this year, the law will eventually take effect, and will force employers to cover these pension gaps. Rather than clean up their act, more and more employers are looking for the exit. By April of this year nearly a third of America’s largest companies had frozen their pension plans.

Many others are invoking the nuclear option, declaring bankruptcy as a way to unload their pension plans on the taxpayers. Unfortunately, the Pension Benefit Guaranty Corporation (PBGC), established in 1975 to backstop private sector pensions, is already reeling from a decade of high-profile and expensive pension defaults at companies like United Airlines and steelmaker LTV.

Nine of the 10 largest pension defaults in history occurred since 2000, leaving the PBGC with a deficit of $11 billion at the end of 2008. That gap could swell to more than $100 billion over the next few years, amounting to a backdoor bailout for big corporations, and a bitter pill for abandoned retirees.

Workers at Republic Steel saw first hand how it works when they had their pensions cut by $1,000 a month in 2002 by the PBGC and then cut again in 2004. Five workers from the Lorain, Ohio, plant committed suicide after the first time their pension was diminished. In the second round of cuts, retirees like Bruce Bostick, former grievance chair for USW Local 1104, saw their retirements fall from $1,047 a month to $125.

The situation for public sector workers isn’t much better. Although 80 percent of public employees have traditional pensions, those benefits are now in the cross-hairs of conservative and liberal politicians. Two-thirds of public sector pension plans are underfunded—to the tune of $430 billion—and state and local budget crises are pitting taxpayers against public employees from California to Maine.

For nearly 20 years the various financial bubbles—from the dot-com frenzy of the 1990s to the recent housing market run-up—papered over the urgent need to address the faltering retirement system.

Wall Street’s collapse last year revealed how the current patchwork of retirement plans is failing almost everyone. As with health benefits, union workers with stable pensions increasingly find themselves on an island of security in a sea of uncertainty.

But the water is rising rapidly.

As the debate over the auto bailout and state budget crises revealed, defending your own decent pension is tough work when half the workers in the country don’t have any retirement at all.

The PBGC—which has been swimming in red ink since 2002—is currently set up to pay less than half of what people were promised. If the funding gaps widen, it could fall to pennies on the dollar.

There will be calls to bail the PBGC out—which needs to happen—1.2 million people now depend on it. A sensible demand is to make it function more like the FDIC, by guaranteeing 100 percent of pension benefits up to a reasonable threshold.

But reform can’t stop there.

If it does, workers are on the same path as before the economic collapse, with a temporary reprieve. Employers will still seek to drive union workers down to non-union standards and dump more risk onto individuals.

We need to return to the original vision of Social Security: a program that (like in Western European nations) can actually pay for most of your old-age living expenses.

A version of this article appeared in Labor Notes #367, October 2009. Don't miss an issue, subscribe today.
Related
Viewpoint: UNITE HERE International Should Keep Its Hands Off Local 2’s Pension Fund »
St. Louis Boeing Plant Workers to Strike »
Review: How Workers Can Safeguard Pensions »
No One Else Was Going To, So These Teamsters Saved Their Own Pensions »
Gas Workers Defend the Next Generation, As Lockout Enters Fourth Month »