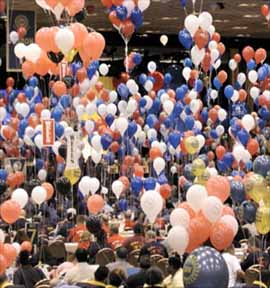 Festive campaign balloons obscured delegates' view of the podium as officers were nominated on Day 3 of the UAW convention.
Photo: Ellis Boal.

As United Auto Workers President Ron Gettelfinger opened the union’s Constitutional Convention in Las Vegas June 12, discontent from the ranks rumbled around him. Bankrupt Delphi Corp. reported more losses, workers had to decide whether to jump ship with a buyout, and DaimlerChrysler workers’ contracts were being gutted local by local.

Gettelfinger defended his union’s decision to begin rolling back retirees’ health benefits, reporting that “declining market share, large numbers of retirees, and escalating health care costs had combined to create a situation that was simply unsustainable.”

Gettelfinger said that established employers with many retirees faced an “unfair burden” with these costs.

Gettelfinger did speak on the importance of resisting Delphi’s demands for enormous concessions, saying, “We need to stop dead in their tracks those who would seek to void contracts with their workers while lining their pockets with everything of value.”

Some workers wondered if this bluster was too little, too late.

Gary Walkowicz, a member of Local 600 in Dearborn, Michigan, said, “It’s disappointing that there hasn’t been a lot of discussion on the floor about the problems facing the UAW— like the deep concessions at Ford and GM and the attack on Delphi workers.”

He added, “The main business of the convention should be about how to organize a fightback.”

A number of opposition delegates united under the banner “Draw the Line at Delphi,” leafleting delegates and at times taking the floor.

This group encouraged the delegates to discuss a strategy for fighting Delphi’s demands, protecting retiree benefits, stopping the outsourcing of union jobs, and ending “shelf agreements” like the ones recently negotiated between the UAW and Daimler-Chrysler.

On the floor, Delphi worker Gregg Shotwell spoke against outsourcing, reminding delegates that the outsourcing of GM workers to Delphi has ended in crisis: “We didn’t fight. We chose to negotiate. We failed.”

In a move heralded by many, delegates ratified a proposal to divert $60 million of the union’s over $900 million strike fund to organizing new workers. Media reports failed to acknowledge, however, that the money will go into the union’s general fund, with the International having the right to use the money as it sees fit on organizing, education, communications, or political action.

Membership in the UAW is steadily declining. Said Shotwell, “Workers in transplants [foreign-owned factories] want health care, pensions, better work rules, democracy—and the union is giving these things up. When the union is in concession mode no one has motivation to want to join it.”

Just days before the convention opened, the UAW agreed to another early retirement “buyout” plan from Delphi and GM (Delphi’s former owner) that would offer incentives for all Delphi workers to leave the company. Workers with more than 10 years’ seniority are being offered $140,000 to sever ties, while those with less than 10 will get $70,000.

Earlier buyouts were offered to only a portion of Delphi workers. Dissidents argue that by supporting the buyouts, the UAW undermines solidarity and any chance of a fightback.

According to Shotwell, the mood of the convention was low and there was little sense of a coherent strategy: “Here we are in a critical time—this union is threatened with extinction and it’s not coming up with a strategy, let alone rhetoric that would rev members up.”

Walkowicz said that there was little opportunity to talk about the future of the union from the convention floor— and many delegates succumbed to the intimidating environment: “The delegates I talked to aren’t satisfied with what’s going on with the union, but there wasn’t an openness to discuss this on the floor.”

ONE LOCAL AT A TIME

Even for workers not facing immediate job loss, pressures are mounting. At DaimlerChrysler, the company has practiced classic whipsawing, demanding “shelf agreements” at local after local. In this scheme, the company says it will consider future work for a plant only if the local agrees in advance to deep concessions. The agreement stays “on the shelf ” until the new work arrives.

A memorandum outlining the agreement at the Trenton, Michigan facility reads, “The parties agree that a flexible, non-traditional labor force is required to produce the new V6 engine in the Trenton area.” This means one with longer work days, less rest time, restricted overtime benefits, and reduced work classifications through outsourcing.

The agreements were initially kept under wraps, allowing local after local to ratify them in isolation. Workers in the Toledo Machining Facility were told their plant would close if they did not ratify. A similar agreement was passed at the Kenosha, Wisconsin plant.

Workers question why the UAW International allowed concessions to be made local by local. Local 1700 delegate Mike Parker wrote in a leaflet, “With this kind of approach by Chrysler management and the assistance from the UAW International, every local in every UAW-represented plant can expect the same kind of contract forced down its throat within the next 6 years.”