Auto Workers Taken for a Ride 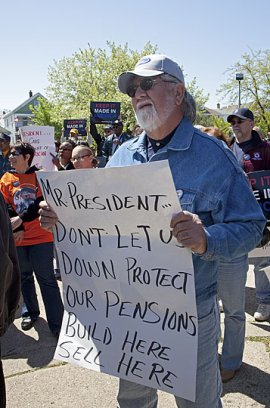 Michigan auto workers joined rallies organized by the Steelworkers May 11 and 12 to save manufacturing jobs in the U.S. Photo: Jim West/jimwestphoto.com

Chrysler’s concessions-or-die deal is the end of auto as the pace-setting, high-wage industry that it was for 60 years. No longer will it set standards all blue-collar workers could aspire to—nor outmatch many white-collar jobs. From now on, working for the auto companies will be just another bust-your-hump factory job.

The government said Chrysler workers should take deep cuts to fend off bankruptcy. But the company decided on bankruptcy anyway—so the downsized new contract now becomes the ceiling. In court, wages and benefits will be ratcheted down from there, and GM and Ford workers will likely be asked to match them.

The retirees’ health care fund, the Voluntary Employee Beneficiary Association (VEBA) run by the United Auto Workers (UAW), will be drastically underfunded, with devalued Chrysler stock. Benefits were cut immediately, but the bigger question is how long the fund will last at all.

Under the new contract that’s now up for grabs, wages for new hires would be cut in half, from $29 to $14, with no raises or bonuses for six years. New hires would also have reduced health care benefits and only 401(k) plans for retirement. That gives the company strong incentives to oust current workers.

Detroiter and Local 1700 member Tony Browning predicted that the new system would set bottom-tier workers against top-tier ones, by giving the low-paid workers incentives to bring well-paid ones down.

See also:   Getting Detroit Back to Work

As GM and Chrysler’s retrenching deepens, the two companies have announced that together they will shutter 24 plants. Rank-and-file job losses will likely total in the tens of thousands. . . .

“Look around the country—whenever they get two-tier, in the next contract they go for one-tier,” Browning said. “Sometimes they don’t even wait till the contract is up. Contracts don’t seem to carry the weight they used to carry.”

WHAT’S LEFT OF IT

The growth of the second-tier workforce might be slowed somewhat by the fact that eight factories in Michigan, Missouri, Ohio, Delaware, and Wisconsin will close, and workers laid off there will have transfer rights to remaining plants.

Chrysler bargainers did not mention the plant closings to the union negotiating committee, nor are they referenced in the contract workers approved. In fact, a contract letter said that the company was studying how to keep open one Ohio stamping plant.

The next day, after workers voted, it became clear that plant closings were part of the plan all along. The decision to close the Ohio plant and seven others became public only via the Chrysler bankruptcy website.

• The union gave up the right to strike when it bargains the next four-year contract, in September 2011. Unresolved issues will go to binding arbitration, with the stipulation that wages and benefits must be pegged to those of Chrysler’s U.S. competitors—including the non-union auto companies.

“That was our only power,” said Browning, adding that he doubted whether union members would even be allowed to vote in 2011. “It’ll be between the UAW and management,” he predicted. “They’ll make that untouchable for us.”

• Most skilled trades workers will be placed in just two classifications—a long-held management goal—with no restrictions on contracting out skilled work. What this means is that pipefitters, for example, will also do painting, carpentry, welding, and die-making.

“We’ll be doing just about anybody’s work,” said Alex Wassell, a welder-repairman with 16 years’ seniority at a Warren, Michigan, stamping plant. “In the long run it will have a serious impact on the numbers. That’s why they wanted it.”

• There’s one silver lining under the new regime—the second-tier workforce will be younger and better able to withstand a maxed-out work pace. All plants will operate on the “team concept,” which enhances management’s flexibility to deploy workers at will, without regard to seniority. Temporary workers may be used more freely.

• Plant managers may switch to a schedule of four 10-hour days, paid at straight time. Break time is reduced by 13 percent. Vacations and holidays are cut back.

VOTING FOR A REPRIEVE

Wassell and others passed out flyers against the contract from the rank-and-file Autoworker Caravan opposition group. Despite the overall 80 percent vote in favor, he said, people didn’t like the terms. “They were in favor of holding onto their jobs for the next six months,” he said.

Negotiations with GM are up next. Welder Don Kemp of GM’s Truck and Bus plant in Flint is baffled by the UAW’s failure to involve or even inform members. “We’re in a blackout from our union,” Kemp said. “We hear more from the news.” At a meeting called to talk about the plant’s local contract, Kemp said, officials announced up-front that no national issues would be discussed.

“The UAW is letting a really good opportunity go by to tell our story,” he said. “I think they need to come out and start telling people how much they need the auto industry.”

For Bill Parker, local president at a Detroit-area plant that’s slated to close, the situation shows the folly of bargaining benefits company by company.

As corporations eliminated such decencies as health care for retirees—or even defined-benefit pensions—Big 3 workers’ benefits stood out like a sore thumb, waiting for the hammer to fall.

At the very least, Parker said, the UAW should have responded to the huge changes in the industry over the last 20 years. Multinational companies from Asia and Europe set up shop in the U.S., expanding the non-union sector. The Big 3 spun off parts-making divisions, and the parts sector became more and more non-union.

The union should have fought for a benefits plan that transcended particular employers, he said. Now, retirement for people who spent their lives on the assembly line looks anything but golden.