Getting Detroit Back to Work 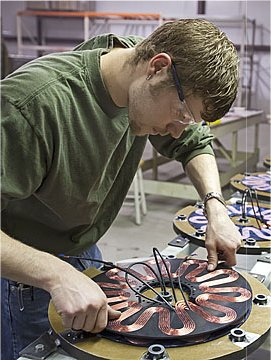 As GM and Chrysler’s retrenching deepens, the two companies have announced that together they will shutter 24 plants. Rank-and-file job losses will likely total in the tens of thousands.

Bill Parker, who heads the local union at a Detroit-area Chrysler plant, wonders why the administration’s restructuring plan will empty auto factories and disperse thousands of skilled workers in the Midwest who’ve spent a lifetime shaping metal into useful things.

Why not retain workers who already know how to manufacture complex machines, Parker says, and make use of exhausted auto factories, rather than letting them crumble?

The government, already doling out $500 million this year to train workers for “green jobs,” could save wads of cash.

He points out that achieving the carbon emission reductions President Obama wants will require billions of dollars invested in green energy, including building those wind turbines that swooped through so many of his campaign ads. A Department of Energy report says producing one-fifth of the nation’s electricity from wind could support 3 million jobs in the United States—and would require a $500 billion investment.

Chrysler’s concessions-or-die deal is the end of auto as the pace-setting, high-wage industry that it was for 60 years. No longer will it set standards all blue-collar workers could aspire to—nor outmatch many white-collar jobs. . . .

If Obama wanted a blueprint for how to do it, he could do worse than copying the Gamesa model. The Spanish wind-turbine manufacturer moved into the shell of the old U.S. Steel Fairless Works outside of Philadelphia three years ago, lured by rail links, a port, and a commitment by the state of Pennsylvania to generate 18 percent of its power from clean sources in a decade’s time.

The Steelworkers union traded political support for the governor for his help in retooling the “brown belt” of abandoned factories dotting the state. Gamesa’s investment netted the union not just jobs in a struggling industrial area but a card-check recognition agreement covering its 600 workers. (That number has shrunk, however, as the firm has sought bigger manufacturing facilities elsewhere in Pennsylvania.)

Wages in the first contract at Gamesa were quite modest, starting at $12.73 for production workers and $20 for skilled. Workers pay a quarter of the cost for family health care coverage.

Jim Bauer, who operated a crane at the Fairless Works for 25 years, now heads a Steelworkers local at Gamesa. The company sent him to Spain for three months to learn how to make the giant hubs that house a turbine’s bearing assembly.

Turbines have about 8,000 parts, more of which are being produced in the U.S. now, Bauer said, as Gamesa learned that shipping parts from overseas exposed them to deterioration from salt water. Now, other European vendors are following Gamesa into Pennsylvania, replacing old coke and blast furnaces with green-energy manufacturing.

“It’s coming back,” Bauer said. “The buildings are the same, the cranes are the same—we’re just lifting different material now.”

And another new company is hiring at the Fairless Works as well, lured by state incentives. It makes components for solar cells.

It is a shame to put skilled labor out of work. Local governments should do all they can to bring industry to the area that would need our skilled labor. Turbines are an excellent place to start.

Hello, This is fantastic. I read an article the other day about a guy in Hart Michigan. His home remodeling business was falling off. So, he became a dealer and began installing and selling home wind systems. I was reading that these systems they are putting in are far more efficient and cheaper than these vertical ones. The WindEnergy7 systems use solar AND wind in a wind/solar hybrid. They are cheaper and make power even when there's no wind at all. This is great, this is how we can re-shape our economy and get people in Michigan back to work here. Bravo!