Restructure the Big 3, but Not with Bankruptcy 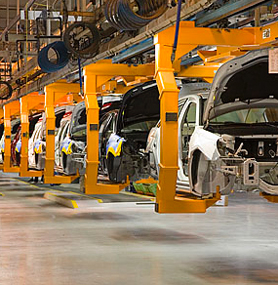 GM’s auditor predicted in early March that bankruptcy could mean 47,000 jobs lost and 14 additional plant closures. Bankruptcy, unless we rewrite it, will be a one-way ticket to disposable jobs in a hollowed-out Midwest. Photo: Jim West, jimwestphoto.com

Bankruptcy talk for the troubled automakers GM and Chrysler is accelerating, and President Obama—as well as the companies themselves—is raising the frightening prospect of mass layoffs and plant closings.

If the car companies are too big to fail, too poorly run to put right, it’s time to take them over. But Obama made a point of ruling out a takeover this week, saying that the government doesn’t want to run the companies. If they can’t present turnaround plans that restore them to profitability, he prefers bankruptcy—which, without significant alterations, will be a disaster for wide swaths of the Midwest.

Obama insists that GM and Chrysler submit to “fundamental restructuring.” He issued a call for the auto industry to remake itself along the lines seen in World War II. Then, the U.S. desperately needed war material, and Detroit had the factories and the willing workers. Within weeks the “Arsenal of Democracy” was churning out machines of war instead of four-door sedans, and the government poured money into Michigan to make it happen, spending $56 billion in today’s dollars over the war years.

The Arsenal of Democracy resulted not from private initiative, not from patiently waiting for the “ingenuity” of executives, but because government demanded it.

This moment is crying out for that kind of resolve, not the half-hearted jawboning Obama described on Monday. GM’s problems can’t be solved by a symbolic (and well-compensated) firing of the CEO. What’s needed is to transition shuttered auto plants into a new transportation and energy sector that can wean us from oil. Obama should insist that the dozens of excess auto factories be put to work building clean cars, mass transit, and those 6,000 components of a wind turbine.

While he’s at it, he should dump the employer-based health care system that, at the Big 3, is about to collapse.

That’s because our jobs, health care, energy, environment, and transportation problems are all linked, and solving them means connecting the hip bone to the thigh bone: With car sales plummeting 41 percent last month and no bottom in sight, Detroit’s automakers could shutter upwards of 30 factories and still meet current demand. Auto workers face tens of thousands of job losses and billions of dollars in benefit cuts. A million retirees and their families could lose health care. The highways and bridges we depend on are falling to pieces. Those highways feed sprawling suburbs brimming with foreclosed homes.

Let’s address all those problems at the same time. In other countries, it’s called an “industrial policy,” a comprehensive strategy to make sure we’re investing wisely. (It’s no accident that Spain and Denmark make the world’s wind turbines now, and that France and Japan make its railcars.)

The alternative is putting failing auto companies through what industry insiders are calling a “quick rinse”: a pre-packaged bankruptcy that would start by tearing up the contractual obligations made to former workers as they labored for decades. First on the chopping block are “debt obligations,” the code name for money promised for retiree health care through the voluntary employee beneficiary association (VEBA).

Obama furthered the likelihood of bankruptcy this week by guaranteeing that service warranties would be honored if that happened. GM, too, has softened its tone on bankruptcy recently.

Company executives must be coming to understand what other corporations have long known: a trip into Chapter 11 has been the excuse for airlines, steelmakers, and other companies to gut union contracts, impose layoffs, and destroy the jobs that promised a pension, health care, and decent wages in exchange for 30 years of intensely demanding work.

In bankruptcy, the company proposes a restructuring plan to the bankruptcy judge, which in three months must settle all debts, restructure contracts, and pay off the financers who kept the business running during bankruptcy. (These financers are known as “debtors-in-possession.”)

Bankruptcy judges and their “bankruptcy masters,” who are appointed by the court to handle the day-to-day negotiations, use the power granted to them in the bankruptcy code to shred contracts and force unions to take concessions.

Though their future wages, pensions, and benefits are being decided, workers often have no say in these negotiations, under current rules.

Usually the best case for labor is to get a rump-end seat on the least-important committee, the unsecured creditors committee, where labor reps can plead with other committee members and the bankruptcy master to try and get a few scraps thrown their way.

The debtor-in-possession financer, meanwhile, jumps to the head of the line in terms of who gets paid first by the bankrupt company.

Not only is it paid first, the debtor-in-possession is also the key decision-maker in restructuring. Workers at auto-parts supplier Delphi discovered this when the private equity firm Appaloosa Partners provided bankruptcy financing and dramatically reshaped the company.

ANY LIGHT IN THIS TUNNEL?

GM’s or Chrysler’s bankruptcy would be disastrous for millions of workers and their families. Entire communities would be emptied of decent jobs and retirees could see pensions and health care coverage gutted. GM’s auditor predicted in early March that bankruptcy could mean 47,000 jobs lost and 14 additional plant closures. That doesn’t even begin to suggest the impact of the failure of up to 100 parts suppliers, a likelihood, according to a UAW researcher’s estimates.

The time is ripe for bolder action, but if Obama insists on bankruptcy, he should rewrite the script for bankruptcy proceedings to avoid this kind of devastation. Here’s three modest proposals.

Have the government function as the “debtor-in-possession” financer. Running the show would give us the leverage we need to break with car-dependent transportation and put the engineers and the plants to work on the transit of the future.

Don’t let the car companies shop around for friendly judges. Bankruptcy courts are often chosen by companies based on their willingness to rule in favor of employers. That should be out of the question. And because the government is driving the reorganization, the bankruptcy master should be designated by the White House, the Department of Labor, and the Department of Transportation.

Set up a labor committee. Instead of shunting labor to the side, put it on an equal footing with the creditors’ committees. Give the labor committee input into the governance and planning of the company under bankruptcy, including veto power on the “plan of reorganization.”

Of course, the bankruptcy czar could just push for concessions, and a labor committee under the control of the current UAW leadership could just stand meekly alongside the same executives that dragged the companies into the ground. They’ve chosen to do so, so far.

But that’s what he and his boss are doing with the auto industry—throwing billions at a sinkhole and making workers pay for their bosses’ mistakes.

We could use this moment to craft an industrial policy that marries good blue-collar jobs, pensions, and health care to a green economy. Bankruptcy, unless we rewrite it, is a one-way ticket to disposable jobs in a hollowed-out Midwest.

Urban planner types like me conclude the end of the road is near for the auto industry as we know it. The 4 basic modes of urban/suburban travel, (cars/trucks, transit, walking, bicycling), must all function. When trips by car dominate this modal split, not only do the other modes face a severe impediment, travel by car also fails to function optimally. We've created a transportation monopoly and an actual Constitutional Inequity. Build cities and suburbs as if the only mode of travel that may function is driving, and we take our lives in our hands to walk across streets and ride bikes. When daily trips are to destinations far removed from home, they're inconvenient for walking and the development pattern is too impractical to arrange mass transit.

The vehicle technologies to promote are electric-motor drive hybrids and the next-generation Plug-in hybrids. The advantages and benefits these offer far, far exceed mere fuel economy. Their 'invaluable' safety features should not go unreported while ridiculous claims of safety hazards dominate the press. They're a perfect match with rooftop photovoltiac solar panels, offering a household the means to power basic electric devices in the event of a grid failure.

Their most important feature may be the effect they have upon land-use and development. A car powered by less expensive electricity as little as 10 miles creates an incentive to drive less, especially when a household is offered the choice of driving or keeping the lights on or the fridgerator running. Their compatability with smart grid systems guarantee energy conservation. Over time, more destinations become accessable without having to drive. This is how walking and bicycling will become viable travel options. The change in land-use patterns make mass transit more practical to arrange.

Hydrogen fuel cell vehicles will only fill niche applications like battery-only electric cars that fail to serve real-world needs. Bio-fuels achieve most efficient combustion in a hybrid drivetrain. GM's volt is aimed at the niche luxury car market and like Chrysler plan to cancel their models (Saturn and PT Cruiser) that have begun to make the switch to hybrid.

If GM were file for bankrupcy, could Chevrolet, Pontiac, Buick, Saturn and Crapillac go on making practical hybrids without GM dictating its middleman terms? Isn't it about time GMC redesigned its paratransit vans? How much longer will municipal transit agencies buy cumbersome high-floor, lift-equipped paratransit vans while their main bus fleet is shifting to sensible low-floor buses?

If the Big 3 restructuring ends up offering only standard drivetrain, fuel-efficient mini-cars, probably manufactured overseas, nothing's changed. We drive too much, too far, for too many purposes, at too high cost and impact. The automobile industry and lifestyle as we know it has reached the end of the road. I'm doubtful this Fritz Henderson guy is on the level. He seems to be sweating like a patsy or fall guy.