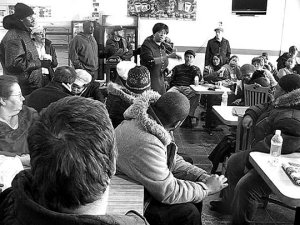 UNITE HERE had a lot to resolve at the three-day meeting of its General Executive Board in February—namely, the fate of the union.

Two presidents, UNITE’s Bruce Raynor and HERE’s John Wilhelm, forged an alliance in 2004, but as the union’s first convention approaches, the relationship has dissolved into out-and-out civil war.

Raynor first attempted to shore up support in a union where HERE members predominate by dispatching supporters to take over HERE-led locals in Detroit and Phoenix in recent months.

The executive board, dominated by HERE, responded by expanding its control over the union and voting to put three UNITE-led regional boards in the Northeast under trusteeship—a move they later retracted. Raynor and UNITE leaders then sued to separate the unions.

Factors in the complicated rift include power, money, ego, and disagreements over organizing strategies.

A week before the February 9-11 board meeting in Washington, D.C., Service Employees President Andy Stern invited UNITE HERE leaders to find a new home in SEIU. Wilhelm politely declined, but UNITE organizers say Raynor had already reached a deal with Stern before arriving in D.C.

On the meeting’s first day, Raynor and 23 vice presidents brought a resolution to dissolve the merger, deeming the 2004 tie-up a “dismal failure.” The board voted down the move by 62 percent.

Wilhelm said he would not give up on the merger and stressed the need to follow the union’s democratic procedures for resolving disputes.

Nearly all votes on resolutions were along party lines. Because of HERE’s large majorities on the union’s two most important decision-making bodies, both sides believe HERE leaders will unseat Raynor if the merger survives until the union’s June convention.

When the dissolution resolution fizzled, Raynor allies quickly turned to the courthouse. Leaders of 14 regional joint boards, a holdover structure from the former UNITE, sued for separation from the union in U.S. District Court in New York. It was the second lawsuit from Raynor’s camp, which had sued January 22 to halt HERE leaders on the union’s executive committee from exercising control over budget, staffing, and trusteeship matters.

The suit claims the terms of the merger allow joint boards to disaffiliate unilaterally, taking their money and members with them. UNITE owns the Amalgamated Bank, which has $5 billion in assets, and holds valuable New York property. Four years ago, it agreed to underwrite the organizing campaigns of HERE, which was larger but nearly bankrupt. Since 2005, the union has poured $61 million into hotel and gaming organizing.

Raynor accuses Wilhelm of failing to deliver membership growth equal to the investment—and seeking further “control of the union and UNITE’s assets…so he can then redirect them to the failed programs of a few of his favorite locals.”

WHICH WAY TO ORGANIZE?

Both sides agree on the need to grow the union, but their strategies differ. Wilhelm has recently criticized SEIU’s growth at all costs model, which Raynor has embraced. He worked with Stern to complete secret agreements with Sodexho, Compass, and Aramark, exposed in May 2008, that permitted SEIU and UNITE HERE to jointly organize housekeeping, laundry, and food service workers without company interference—so long as the unions limited organizing to specific sites and dropped others where campaigns were under way. The agreements also limited the total number of workers allowed to organize and waived workers’ right to strike.

“Such agreements should not be made at the expense of the very standards that are at the core of the union’s purpose,” Wilhelm said. “The union cannot expect to grow by making itself less relevant and beneficial to its members. Such a course would ultimately destroy the union.”

Wilhelm put forth a series of proposed changes to the union’s governance structure that would decentralize power away from the International presidents and ensure more power for the executive board, more autonomy for locals in negotiations and enforcement of contracts, and more local control of union funds.

Tensions between staffers have grown. UNITE-side organizers, through their staff union, have a grievance in arbitration against HERE’s choice of training methods. UNITE staff say organizers are asked to share traumatic events from their past with co-workers in team-building exercises; and object to gathering and sharing similar information about workers during organizing drives.

Members report that the jockeying for control of locals and resources has dented the union’s presence at work sites.

“Our union dues are paying for both sides, which are pitting member against member. And they’re spending our money with no resolution in sight,” said Ernest Lemond, president of Local 24’s Airport Division in Detroit.

UNITE leaders removed HERE veteran Joe Daugherty from his position as Michigan state director in January. At the executive board meeting, several ousted Local 24 leaders presented petitions to disaffiliate their local from the UNITE-dominated regional board, amid protests from other Detroit members.

The board voted to permit the disaffiliation and give the local more control over its dues. UNITE leaders abstained. While Joint Board officials stay put in Detroit, the case is poised for resolution in the courts. In the meantime, Local 24 remains out of sorts.

Jeff McCaffrey, who heads Local 24’s gaming division and tends bar at Detroit’s MGM Grand Casino, says the local has had to fight with the new UNITE-affiliated state director at the negotiating table over control of bargaining.

“Both sides are saying they’re the legitimate bargaining representative,” Lemond said. “Some of the companies have put union dues in escrow and have chosen not to deal with either side—they’re using this to their advantage.”

All eyes are on Chicago, where the June convention may be the next venue for UNITE HERE divorce court. After UNITE delegates walked out of the November convention for Canadian affiliates, preventing a quorum, the union’s Public Review Board asked the Department of Labor to ensure that the democratic process remains intact at the convention.

But UNITE HERE may not make it that far.

“This breakup is inevitable,” Lemond said. “They’re going to go their separate ways. It’s just how they do it.”

UNITE organizers say they’ve been informing members in their shops that a new marriage, one with SEIU—now poised to enter hotel organizing—is on the horizon.

The best thing that could happen to these two unions is they split and both go bankrupt and are never heard from again! After all, if your motto is pay up or be fired, where does that say we care about our members!!

since there is no real involvement of HERE in the casino's or management has fired a select amount of bartenders and re-hired them as part time without going through the proper steps we are now under the existing part timers and our seniority has been dropped. They are doing whatever they want without any concern of the associates. What is the point of a union or contracts if they are doing what they want when they want? WHERE ARE OUR RIGHTS? WHO IS REALLY FIGHTING FOR OUR INTERESTS?

The left-overs will ripe for Andy "the greedy one" Stern to organize (joke) merge into SEIU.

Too bad that we have these folks battling when we really shouldn't be buying into the corporate attempts to break us. We need to all start pulling together, remember what brings us together: EFCA and FAIR SHARE and all the other pro-union things that we MUST get passed in order to survive.

I wish those involved in the dispute would consider the difficulties of those of us attempting to organize in cities without UNITE or HERE. Our struggle is hard enough, and now we have to fudge the stability of the union we're supposedly fighting to represent us.

the members of local 24 should be allowed to vote, shop on shop, on which side of this disagreement would better serve them. One caveat, those elections MUST be secret and conducted by a third impartial party in a manner that seeks the highest member participation. Each side should also be free to make their case.

HERE was greedy, needing money to continue....Unite was greedy, wanting a significant growth in membership. This marriage was Divorce Court Bound the minute they said I Do!!!