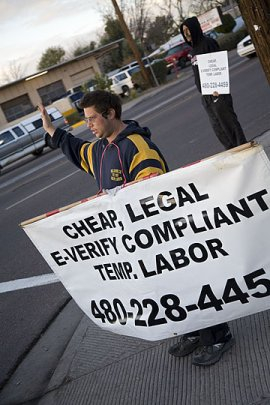 A temporary labor firm in Arizona advertises that it screens its workers with the E-Verify system. Critics say the database contains millions of mistakes and makes workers “more vulnerable to exploitation.” Photo: Jim West/jimwestphoto.com

California may become the latest of several states to put restrictions on an online system that attempts to verify whether a job applicant can work in the U.S.

Unions and immigrants’ rights groups—including the Service Employees and the California Immigrant Policy Center—are sponsoring a bill to limit use of the federal program, calling it a tool the government uses to target immigrants in the workplace.

“We’ve had members who’ve lost their jobs and been discriminated against because of erroneous, flawed information from the federal government,” said Allen Davenport, government relations director for the SEIU California State Council.

The program, known as E-Verify, allows employers to use the Social Security Administration and Department of Homeland Security (DHS) databases to check names and Social Security numbers against the I-9 forms that new employees must fill out.

The idea is to confirm whether applicants have authorization to work in the U.S.—no simple feat, given overlapping systems that contain millions of mistakes.

A range of forces, from unions to businesses to immigrants’ rights advocates to civil liberties lawyers, have resisted the program, citing its built-in flaws and potential for discrimination against workers, documented and undocumented alike.

Businesses say the system’s flaws put them at legal risk. Rights groups say E-Verify will push undocumented workers into unregulated and dangerous under-the-table jobs. The National Immigration Law Center (NILC) says E-Verify is “not the magic bullet that will curb the hiring of unauthorized workers” or stem immigration. Rather, employers can use the system as a threat, allowing them to depress wages and ignore health and safety complaints.

Though companies have used E-Verify voluntarily since 1997, debate around it has heated up recently in anticipation of its expiration in November. President Bush and many legislators have pushed to make it mandatory for all employers, and Bush signed an executive order in June that requires federal contractors to use the system.

Nationally, E-Verify is mandated in Arizona and Mississippi, but Illinois and Oklahoma have passed legislation curtailing its use. (Illinois’s rule is on hold pending a DHS lawsuit.)

IF IT’S BROKE, DON’T USE IT

It also appears to be biased against non-native workers.

According to an evaluation prepared by DHS in September 2007, foreign-born workers authorized to work in the U.S. are 30 times more likely than native-born workers to be flagged by the system. Naturalized citizens are the most likely to be rejected by E-Verify.

“We have a fatally flawed program here,” said Ana Avendaño, immigration program director for the AFL-CIO.

Because discrimination based on citizenship or national origin at the time of hiring is illegal, E-Verify can legally be used to check workers’ immigration or work status only after they have already been hired.

But in the climate of fear created by government raids—there were 4,940 workplace arrests of undocumented workers last year and already 3,875 as of May—advocates say employers are likely to abuse the system.

Though they are required to notify workers of a problem and give them time to fix it, some employers simply fire workers that the E-Verify system rejects.

The California bill would prohibit government agencies and discourage private employers from signing up for the program. It is the latest example of the pockets of opposition to E-Verify around the country.

E-Verify makes workers “more vulnerable to exploitation,” she said. “It makes people believe they don’t have any rights and makes employers believe workers can be exploited more.”

The Long Island Immigrant Alliance successfully pressed a local legislator who had introduced mandatory verification legislation to withdraw his bill.

On a national scale, the Low-Wage Immigrant Worker coalition (convened by several unions and immigrants’ rights groups) has campaigned against Carlyle Group, a private equity firm that requires its Dunkin’ Donuts and Baskin Robbins franchises to use E-Verify. Protests against Carlyle have occurred in New York, Los Angeles, Boston, Washington, D.C., Chicago, and Milwaukee.

With national immigration bills stalled in Congress, the emphasis of enforcement has shifted from the border to the workplace, and state and local governments are attempting to regulate immigration on their own.

Chris Newman, legal counsel with the National Day Laborer Organizing Network, argues that with E-Verify, anti-immigration hardliners—or nativists—are opting for a “strategy of attrition” to force out migrant workers by targeting them in the workplace.

“The strategy of the nativist movement is not to cause the mass deportation of 12 million people,” he said, “but by piecemeal to erode their rights.”

Activists believe that resistance to E-Verify has exposed the program’s weaknesses, making it harder for Congress to renew it in November. Similar electronic verification systems have been proposed, however, and workplace enforcement will remain central in the immigration debate.

Related
Viewpoint: Abolish the H-2A Program! »
Review: On the Line: A Story of Class, Solidarity, and Two Women’s Epic Fight to Build a Union »
Immigrant Textile Workers Win Long Strike Against 84-Hour Work Week in Italy »
Los Deliveristas Speak: How Delivery Workers Are Organizing to Take On the Apps »
Viewpoint: A ‘Union’ That Pushes to Deport People Is the Labor Movement's Opponent »