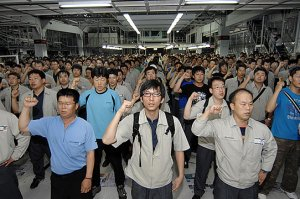 During their strikes against the U.S.-Korea Free Trade Agreement, workers held a rally at the Hyundai Motors factor in Ulsan. Photo: Korean Metal Workers Union


During their strikes against the U.S.-Korea Free Trade Agreement, workers held a rally at the
Hyundai Motors factor in Ulsan. Photo: Korean Metal Workers Union

Korean metal workers are on the front lines in the fight against the Free Trade Agreement (FTA) between the South Korean and U.S. governments. Protesting the agreement, which was signed on June 30, about 110,000 Korean Metal Workers’ Union (KMWU) members in 157 locals across the county organized a five-day strike starting on June 25.

Under the FTA, South Korea and the U.S. would loosen or eliminate trade regulations and restrictions on manufacturing goods in key industries, such as agriculture, textile, and automobile, as well as in the service, technology, and financial sectors.

The FTA will allow auto companies to export any car between the two countries as long as 60 percent of its value is made and assembled at home. This will likely accelerate shifting of auto parts production to countries where labor is cheap.

Employers and the government have urged workers to support the agreement, stating that the auto industry would see the greatest benefits. The Korean Alliance against the Korea-U.S. Free Trade Agreement (KoA) responded that even if the Korean industry might increase exports to the U.S., “any profits will go to capital and not to workers themselves.”

Hyewon Chong, director of the KMWU department of international affairs, said that the agreement threatens “workers’ wages and working conditions” and will “create the conditions that would tend to restrict the actual exercise of labor rights.” She also criticized the agreement as “anti-democratic,” noting that both Korean and U.S. workers were excluded from the decision-making process.

During the first three days of the strike, workers rotated two-hour stoppages from region to region and then escalated the struggle with a nationwide strike for the last two days. On June 29 strikers gathered in several cities and jointly held street protests and rallies with the KoA.

The KoA was formed in 2006 by a coalition of 300 labor, farmers’, and citizens’ organizations, including the massive Korean Confederation of Trade Unions (KCTU), of which KMWU is an affiliate. The KoA has organized a range of actions against the agreement, including vigils and hunger strikes. At the Seoul protest on June 29, over 25,000 metal workers and KoA members confronted riot police despite heavy rain.

Arrest warrants were recently issued against 27 local and national union officers, charging them with “obstructing businesses.” The government called the strike illegal because it was a “political” strike and arrested two KoA co-chairs on July 3 for organizing the “non-permitted” June 29 rally.

The FTA must be ratified by legislatures in both countries before it takes effect. The KoA has been organizing a global campaign to protest against the confinement of two co-chairs since July 4. Meanwhile, solidarity messages flooded into KMWU offices from 38 labor organizations in about 25 countries around the world, including the AFL-CIO, the UAW, and the United Electrical Workers.

At the June 29 rally, KMWU President Gabdeuk Jung announced, “This is the beginning of the struggle.”