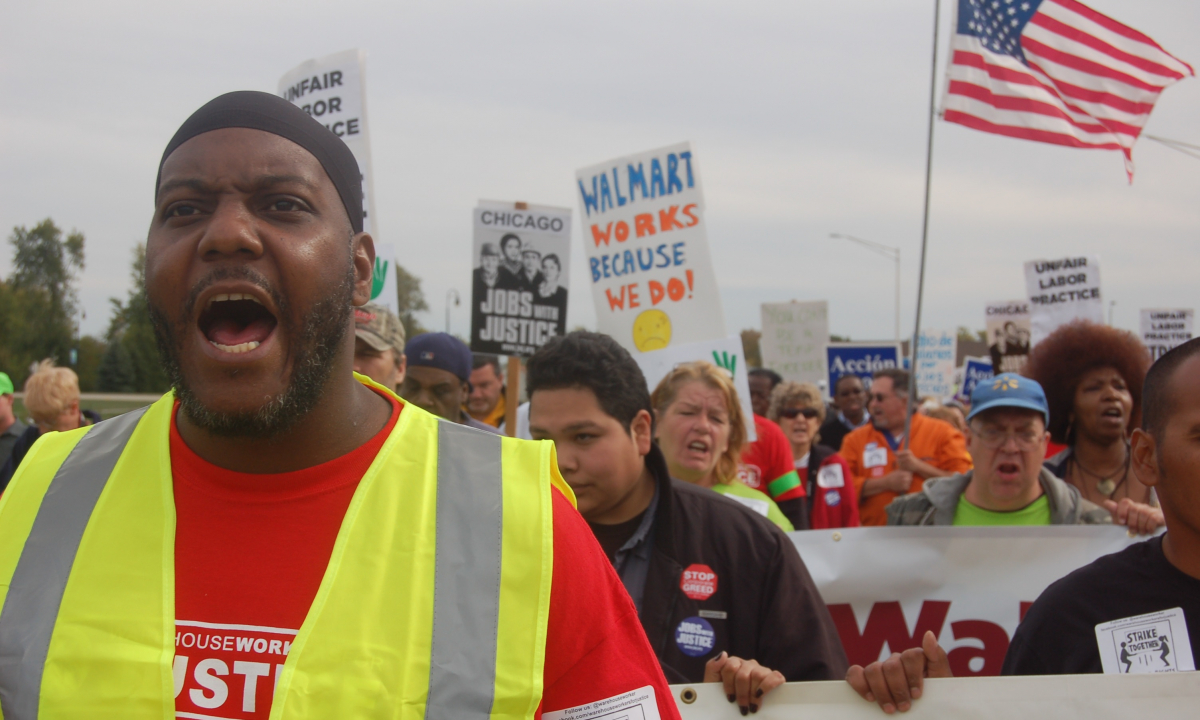 Thirty workers at an Illinois warehouse at the heart of Walmart's supply chain won a three-week unfair labor practice strike in 2012, returning to work with safer conditions and full back pay. “This place is very strategic,” said striker Phil Bailey. “It’s at the heart of Walmart. You clog it up, you can give Walmart a heart attack.” Photo: People's World (CC BY-NC 2.0)

Where’s our economy headed? This is part two of our interview with Kim Moody, co-founder of this magazine and the author of many books on U.S. labor.

Despite the hype about the “gig economy,” Moody argued in Part 1 that the bigger change most workers are experiencing is the rise of the crappy-job economy. On the bright side, he pointed out how just-in-time production has created huge concentrations of workers—and vast potential for organizing.

In Part 2, we ask Moody about corporate mergers, the changing demographics of the U.S. workforce, and what it will take to organize the South:

Labor Notes: Increased competition between corporations has led to massive mergers. What has been the impact on workers?

Kim Moody: It’s in the mid-’90s that this new mergers and acquisitions wave took hold. It was fundamentally different from the big mergers and acquisitions waves of the ’60s, ’70s, and ’80s. Those mostly were about conglomeration—companies buying up all different kinds of production, finance, and everything you can get your hands on. Diversification would be another word for it.

The mergers of the mid-’90s forward have gone in the opposite direction. More companies are shedding unrelated divisions. For example, General Electric and General Motors used to have huge financial divisions and they dumped those, even though they were moneymakers.

All these major industries have seen mergers that are creating bigger employers. In some industries the concentrations are huge. If you look at trucking, UPS is this massive employer that it wasn’t 20 years ago. UPS is in every field of logistics—not just in delivery or even in trucking, but also in air freight.

So companies are buying up things that are in their basic core competencies. The structure of ownership has been realigned in a way similar to the first half of the 20th century, when unions, including the CIO, organized these big corporations.

This concentration of ownership along industrial lines means that there are more economically rational structures now in which unions can organize.

So you would no longer see a situation where the union strikes one division but the company has plenty of unrelated divisions that are still making profits.

Right. And when you put that together with the logistics revolution, you begin to get a picture of what I’m calling “the new terrain of class conflict.”

We are dealing with production systems, of both goods and services, that are far more tightly integrated than they used to be, and companies that are bigger, more capital-intensive, and more economically rational.

So unions should be able to take advantage of the vulnerable points in just-in-time logistics and production to bring some of these new giants to heel. The old idea of industrial unionism might have a new lease on life if—and it is a big if—the unions can take advantage of this situation.

My view is that this is going to have to come from the grassroots of the labor movement. Or those who today are not organized, like the people in warehouses. There is a potential that really hasn’t existed in well over half a century.

The consolidation of industry and the whole logistics revolution: these things have only come together in the last 10 or 15 years. When workers and unions in these industries—and many of these industries have unions in pieces of them—look at this situation, it’s something they’re not used to yet.

It usually takes a generation for the workforce to realize the power that it has, and the points of vulnerability. This was the case when mass production developed in the early 20th century. It took pretty close to a generation before the upheaval of the ‘30s.

Another important change has been in the demographics of the working class. Can you talk about what those changes mean?

This bears not only on unions but on American politics. An obvious change that has taken place in pretty much the same period—the ’80s up until now—and will continue on is the change in the racial and ethnic composition of the entire population, but particularly concentrated in the working class.

For example, if you look at what the Bureau of Labor Statistics calls the “transportation and material moving” occupations in the ’80s, maybe 15 percent of those workers were either African American, Latino, or perhaps Asian. Today it is 40 percent.

Workers of color now compose a much bigger proportion of the workforce, much of it due to immigration. The biggest growth, of course, is among Latino workers. Workers of color are now between 30 and 40 percent of union membership.

It seems the right is making its own hay out of the changing demographics of the country.

This is happening everywhere in the West. It is much easier to blame immigrants for the lack of jobs or housing or crowded schools than it is to figure out how to deal with the powers that be.

So a lot of people turn towards these self-defeating ideas that they can solve their problems by closing off borders and sending people back, or by keeping Muslims out.

We have the potential to have a phenomenally different kind of labor movement. It is going to be different from anything we have ever seen in the United States, or pretty much anywhere else, for that matter. That is, if we have a multicultural, multiracial labor movement that is larger and is growing and is taking advantage of the new terrain that we just talked about.

A common tactic used by business is whipsawing workers against one another, using non-union areas of the country against union-dense areas. I am thinking of Boeing and South Carolina. Boeing got from Washington State the largest subsidy ever given to a company in the United States. And yet they still sent all those jobs to South Carolina, which also provided them with massive subsidies. How much of a hindrance has the inability to organize the South been for labor?

The answer is massive. This goes all the way back to the end of the Second World War, and the amount of manufacturing value-added that was produced in the South just grew until the ’80s.

The amount produced in the South continues to grow a little, but it has more or less leveled off. I have some ideas why.

If you look at the auto parts industry, for example, in the last 10 or 15 years it has dramatically reorganized, one of the most dramatic reorganizations of any industry that I have seen. You have many fewer companies, and those that remain have gotten bigger.

The bulk of them are in the Midwest and not in the South. A huge percentage of them are actually in Michigan. Of course, they are nonunion.

So I am not saying that the South is not important. You won’t crack manufacturing until the South is unionized. These big corporations do whipsaw. But given the new structure of these industries and the logistics revolution, there is a possibility of counter-whipsawing.

Say you have a union drive at a South Carolina plant and you want to cut off production there, to force management to recognize the union. My guess is that you can find suppliers, if they are unionized or can be unionized, whether they are in the South or Midwest, that can strike and close down that plant.

Given the rise of these tight new logistics systems, unions can counter-whipsaw by closing down suppliers or even the transport links, and thereby starve management at these Southern plants into submission. That would require the cooperation of many different unions—but they have to begin thinking about that if they are ever going to organize the South.

Chris Brooks is a staff writer and organizer with Labor Notes.chris@labornotes.org
Kim Moody is one of the founders of Labor Notes.
Related
St. Louis Boeing Plant Workers to Strike »
When Workers Swapped Segregation for Solidarity »
'We'll Never Be in This Position Again': Striking Deere Workers Hold Out for Better Deal »
Nabisco Workers Hope Strike Inspires Others: 'There's More of Us than There Are of Them' »
'Let's Put a Wrench in Things Now': Deere Workers Strike as Company Rakes in Record Profits »