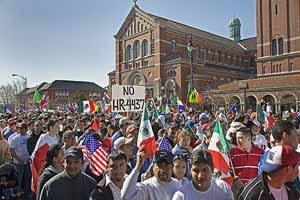 The massive immigrants rights marches in May 2006 may have been the largest political strike in U.S. history. Many were fired afterwards, and now the National Labor Relations Board’s general counsel says that’s OK. Photo: Jim West

An overlooked order by the Labor Board’s lead lawyer this summer dealt a serious blow to the rights of U.S. workers to protest government policies.

On May Day 2006, hundreds of thousands of immigrant workers walked off their jobs to protest restrictive immigration legislation. Some were fired, and brought complaints to the board. Ronald Meisburg, the National Labor Relations Board general counsel, responded by posting a directive on “political advocacy” this July that enables bosses to immediately fire employees who participate in work stoppages of a political nature.

The directive, as yet apparently unnoticed by both unions and labor lawyers, cannot be appealed.

Traditionally, workers around the world have used two kinds of walkouts to achieve their goals, economic strikes over workplace issues and political strikes directed at government policies.

Political strikes in the U.S. are not as common as in Europe and Latin America. But they have happened, as in the 1970s strike by coal miners for black lung legislation and in this year’s walkout by West Coast dock workers against the Iraq war.

The massive immigrants rights marches in May 2006 may have been the largest political strike in U.S. history. In the aftermath, numerous workers, mainly Latino, were fired from their jobs. Among them were employees at three restaurants. La Veranda, a Philadelphia eatery, terminated five workers who told their manager they would miss work. In Fresno, California, a restaurant fired eight of 13 workers for violating its attendance rules. And an Applebee’s restaurant whose location is unclear in the directive fired several workers who left work early. None of the workers belonged to a union.

The 2006 May Day cases appear to be the first to reach the NLRB where workers lost their jobs because of a politically inspired work stoppage.

Since labor law gives all workers—not just union members—a protected right to strike over matters affecting their livelihoods, some of these workers filed unfair labor practice charges at the NLRB seeking reinstatement and back wages.

The workers asserted that they had the same rights as union strikers, in particular, the right to conduct stoppages over workplace-related matters without permission.

Meisburg’s office dismissed the workers’ charges. In his directive, Meisburg, a management lawyer appointed by President Bush, asserted for the first time that work stoppages are protected by the National Labor Relations Act only if they are “directed at an employer who has control over the subject matter of the dispute.”

Thirty years ago the Supreme Court ruled that workers can take part in political activity in their workplaces if the issues involved have a substantial impact on workers’ rights or job conditions. Meisburg said his position was consistent with a footnote in that case, although no other legal authority had drawn such a conclusion.

Jack Getman, the University of Texas law professor who 40 years ago wrote the law-review paper cited by Meisburg to make his case, thinks the general counsel overreached.

"It is within the scope of [the law] for immigrant workers to pressure employers to support their political interests," he said. "There should be no doubt of the activity being protected."

Although the Meisburg directive does not go so far as to make political strikes illegal, the effect is the same. Unless the next general counsel reverses the order, union and non-union workers who hit the bricks over government policies on immigration, health care, or fuel prices, no matter how closely related these matters are to their employment, do so at the risk of immediately and permanently losing their jobs.

[Robert Schwartz is the author of Strikes, Picketing, and Inside Campaigns: A Legal Guide for Unions. Purchase the book.]

Related
Strike Wave Rocks Britain, as Unions Confront the Cost-of-Living Crisis »
‘No Contract, No Matisse’: Philadelphia Museum of Art Workers Win First Contract After Strike »
How to Win NLRB Cases against Union-Busters »
The Right to Strike Is at Stake on the Railroads »
St. Louis Boeing Plant Workers to Strike »

Unfortunately, the chickens have come home to roost.

Beginning with Reagan's attack on air traffic controllers (an attack that Lane Kirkland and other top AFL-CIO officials rolled over for) labor has been on the defensive.

Now the pendulum is beginning to swing the other way. With the economy in the dumps, faith in capitalism at an all time low, there is no way that labor unions won't be able to make serious strides during the next couple of years. The days of Reaganomics are over.

Unfortunately, the chickens have come home to roost.

Beginning with Reagan's attack on air traffic controllers (an attack that Lane Kirkland and other top AFL-CIO officials rolled over for) labor has been on the defensive.

The old adage, "watch out what your pray for...you might get it" is relevant.

It's time for working men and women to come home. it's time for them to vote for the person and the Party that supports working families.

McCain is against the Employee Free Choice Act. Most Republicans are against it too.

Obama supports it. So do most Democrats.

McCain wants to tax workers' health care benefits. Most Republicans think that is a good idea.

Obama wants to extend health care to all. So do most Democrats.

There is a rather long list of McCain's anti-worker votes in the Senate, and most Republicans have voted the same way.

Obama has a stellar pro-worker voting record, and so do most Democrats.

By exercising your "right" to vote for anti-labor politicians you wind up with anti-labor NLRBs, and anti-worker laws. In essence, voters get what they pray for. What a dubious "right".

This November it is in your best interests and in the interests of your family, friends and neighbors to elect Obama and other Democrats. Excluding the Clinton presidency, since 1980 there have been twenty years of unrelenting attacks on working men and women. It's time for change!

This is an unfortunate—but not surprising—move by the NLRB. One of the ways we can successfully challenge this attack on our rights to engage in an action such as the Immigrant rights action (actually a general strike by supporters of immigrant's rights), is to build a political party based on labor....militant labor. Sadly,the Obama campaign is designed to forestall that day.

Any campaign by candidates of either major political party forestalls the needs of working people. The entire system is designed to deflect attempts at addressing worker issues in a substantive manner. You know you're in trouble when the AFL-CIO sends out a mailing claiming that Barack Obama has the "best pro working family voting record of any candidte nominated since 1968". Those nominees were Hubert Humphrey and Richard Nixon. Campaign promises are rhetoric, not guarantees, those we'll have to create for ourselves.