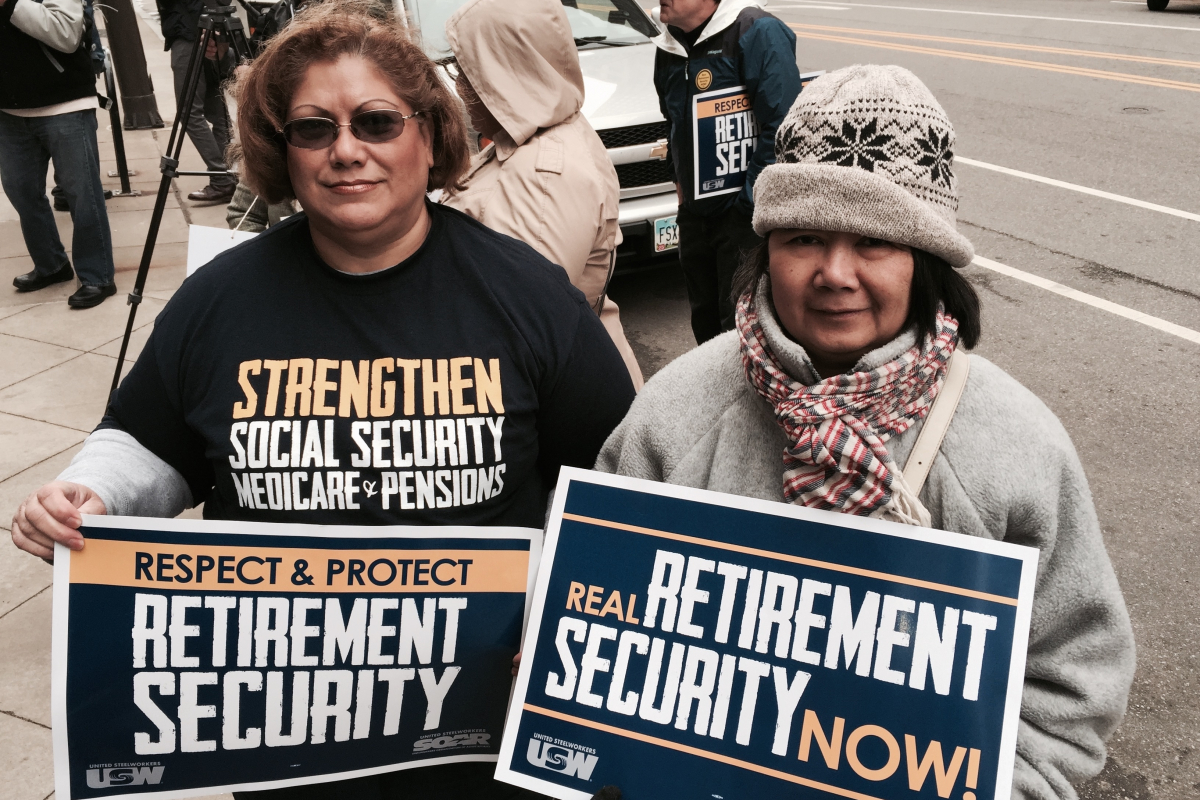 Emboldened after winning a big Congressional majority last year, Republicans are taking another swipe at Social Security. Hundreds of retirees recently rallied in Cleveland to raise the alarm.

“We fought and won Social Security,” said Wynn Antonio, leader of the Cleveland Senior Voice coalition. “It used to be called ‘the third rail,’ because politicians touched it at their own peril. We were here to let them know it’s the third rail again!”

The occasion for the rally was a hearing of the White House Conference on Aging, which meets only once a decade.

The nonpartisan WHCA was established to “identify and advance actions to improve the quality of life for older Americans.” (See box.)

And to some degree, elected representatives of both parties did actually cooperate to carry out those general marching orders—until the so-called “Conservative Revolution” of the ’80s.

From that time forward, Republicans and some pro-corporate Democrats have attacked Social Security, pensions, and retirement security. They’ve succeeded in cutting and rolling back gains that retirees had previously won.

The White House Conference on Aging was established as part of a package of pro-retiree federal legislation passed in the ’60s and ’70s.

The 1965 Older Americans Act set up procedures to give seniors access to community services previously unavailable to them, such as home care, legal aid, transportation, and meal delivery.

In 1974 this package was greatly expanded to include the Employee Retirement Income Security Act, which gave retirees pension protections and basic rights to pension information.

ERISA also set up the Pension Benefit Guarantee Corporation so that the government could take over, save, and administer pension plans for retirees in cases where a company had filed for bankruptcy.

Much of this legislation was inspired by the 1963 bankruptcy of Studebaker Corporation, where thousands of auto workers lost their pensions.

This year, for the first time, Congress has refused even to fund the WHCA and the Older Americans Act.

But rather than cancel this year’s WHCA hearings, the Obama administration decided to hold them, even without funding, in five cities: Phoenix, Tampa, Seattle, Cleveland, and Boston.

A block from the Cleveland hearing, hundreds braved the cold, wet, and windy weather April 27 to rally at a downtown church. They included retired steelworkers, teachers, auto workers, Teamsters, and many not affiliated with any union.

“The WHCA hearings only hold a limited number of folks, and it’s generally dominated by ‘experts,’” said Norm Wernet, president of the Ohio Alliance for Retired Americans. “We felt it was extremely important that regular people’s voices be heard on what proposed cuts mean to families and communities.”

“Social Security and Medicare are lifelines,” said Jim Reed, president of the Cleveland Steelworkers Organization of Active Retirees (SOAR). “They are benefits we fought for and we earned, not some kind of ‘entitlement.’ These benefits keep our members alive, and they help keep the economies of our communities afloat.”

“If we don’t stand up for the benefits we fought so hard to gain,” he said, “these corporations will take everything we have. We’ve got to make sure that doesn’t happen.”

The ralliers weren’t all gray-haired, either. “Young workers and retirees are allies—not enemies, like some would have you believe,” said Elva Martes of Next Generation, the Steelworkers young worker organization.

“If they cut benefits for retirees, it makes it far worse, not better, for young workers in the future.”

Retirees, Watch Out: Detroit May Become Blueprint for Other Cities

‘Grand Bargain’ Would Be a Social Security Swindle

Inside the hearing, Ohio Senator Sherrod Brown and Congresswoman Marcie Kaptur testified that Social Security and Medicare must continue without cuts—then left to speak at the rally.

“For low-income Americans, Social Security represents 85 percent of their income. Cutting these benefits would greatly harm all Americans—and would undermine entire communities.”

“We can preserve and expand Social Security easily,” he said, “by scrapping the cap on Social Security taxes paid by wealthy individuals, and just having them continue to pay for this important program on all their earnings.”

No Social Security taxes are paid on earnings above $118,500.

“Having the wealthy pay their share,” Pienta said, “is far more humane than cutting Social Security benefits from some poor soul!”

A source within the WHCA, who asked not to be identified, told organizers this was the first of the hearings to deal with Social Security and Medicare.

It’s clear that some in the WHCA would have been happier not to address the big issues, so that the meetings would not provide the administration any clear direction—easing the way for a potential bipartisan “grand bargain” to cut these programs.

This public rally, said the source, made any outcome like that much more difficult.

Bruce Bostick is the executive board member representing the Steelworkers Organization of Active Retirees (SOAR) for Ohio.

Related
Interview: If Only Unions Had Managed to Organize the South, Could Trump Have Been Avoided? »
We Need a Disability New Deal, Too »
Copper Workers Strike to Stop Concessionary Trend »
At an Autism Therapy Chain, Low-Wage Therapists Unionize »
Letter to the Editor: Subminimum Wage for Disabled Workers Must Go! »

Budgeting, economic and tax issues, including the "How to Pay For It All" questions will all be addressed if we can enact the National Employment Recovery Act (NERA) and the Bring Jobs Home Act. (BJHA). This four-pronged idea brings in the revenue to fix Social Security and Medicare by removing the "short circuit" in FICA revenue, pays down the deficit and helps educate the next generation. It is a game plan that uses new revenue sources and seeks to minimally disrupt existing revenue flows.

NERA and BJHA are game plans to be addressed more fully in committee. But this DOES provide a sound starting point, something we need to demand from all candidates, Republican, Democrat or Independent, instead of blindly shuffling the deck. If you are a business owner do you not issue "Requests for Proposals" to all prospective contractors then review their "Preliminary Response" documents before deciding to award contracts? In a democracy the citizens in fact "own" the business of government and need to do much the same before voting candidates into office. Time to be proactive by requiring candidates to submit game plans about how to resolve our country's major economic issues.

Let's Fix This Once And For All! Sign the petition - enact the National Employment Recovery Act along with the Bring Jobs Home Act.
http://www.petitions.moveon.org/sign/support-nera-the-national?source=c....